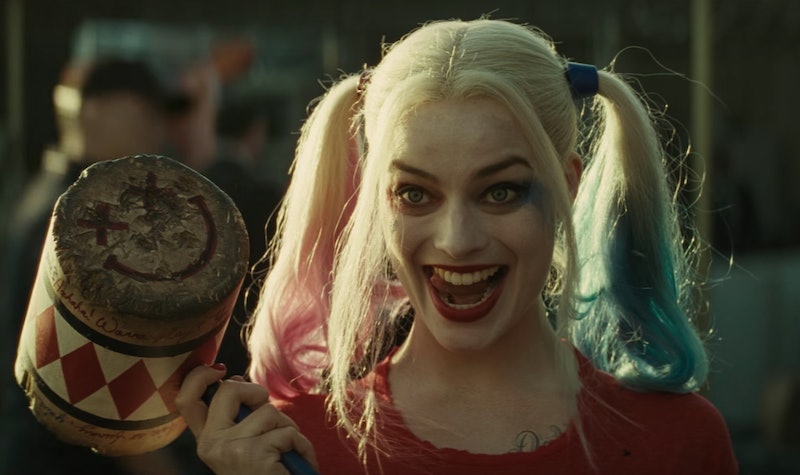 There was only one thing in Suicide Squad more talked about than the actual Suicide Squad: Harley Quinn and the Joker's tattoos. The ink, first revealed in an early photo of Jared Leto as the Joker, have been debated, examined, interpreted, and debated all over again for the better part of the summer. And now that the movie is finally out in theaters, we can all go in for another round. But, instead of trying to find hidden meanings in the creepy (yet fun) tattoos Joker and Harley have in Suicide Squad , I'm going to rank them instead.

The Joker and Harley Quinn's tattoos feature a lot of Easter Eggs and references to the original comics — like Harley's Harlequin/diamond black and red design that harkens to her original costume. But some of the tattoos are also rumored to plant hints about their history in this new DC Cinematic universe, specifically the Joker's complicated relationship with Batman. Suicide Squad director David Ayer said in an interview with Yahoo! that all of the Joker's tattoos had meaning. "There's very specific stories and easter eggs in those tattoos," Ayer said. With that in mind, here are Harley Quinn and the Joker's Suicide Squad tattoos ranked in order of Easter Egg importance.

Harley Quinn's "Lucky You" tattoo is interesting for many reasons. It appears to have been done prior to her arrest (so before she got the tattoos on her legs) but also after the very faded tattoo next to it of a dolphin and a rainbow. The juxtaposition of the "Lucky You" and the dolphin/rainbow could hint at how much Harley has changed since falling in love with the Joker. Maybe the dolphin is a tattoo from her old life as Dr. Harleen Quinzel?

Harley's harlequin diamond pattern on her right arm is a direct nod to Harley Quinn's original black and red costume, which is also briefly seen in the film when Harley is going through her Suicide Squad belongings.

The "HAHAHA" is a phrase typically associated with the Joker, specifically Batman: The Dark Knight Returns, written by Frank Miller with illustrations by Miller and Klaus Janson. It's an iconic visual paired with an iconic villain.

Both Ayer and actor Margot Robbie have said that a majority of Harley Quinn's tattoos were done in prison by herself, which is why, for example, the ink on her legs appear upside down and only cover her front, not her back. However, other tattoos, like Harley's "Rotten" on the side her jaw and the heart on her cheek, she had before she was arrested. It's also worth noting that she didn't have those tattoos before she became Harley Quinn. All the tattoos she got before being arrested are a significant part of her history with the Joker, including "Rotten."

Before her arrest, Harley got "Daddy's Lil' Monster" clearly tattooed on her collarbone. It's a phrase she later incorporates into her Suicide Squad look, and one that has quickly become synonymous with her character. Given that the rest of her costume included a jacket with the phrase "Property of the Joker" (another tattoo she also has), I think it's safe to say that "Daddy's Lil' Monster" is another way for the Joker to assert his power over her. (The same thing could be said about her "Puddin'" tattoos.)

You can see on the Joker's right bicep, he has a tattoo of a dead robin with an arrow through it. Now, the Joker isn't exactly known for subtlety, so it's widely believed that the tattoo is a reference to the fact that he killed Robin, Batman's sidekick whose death haunts him in Batman v. Superman. It's both a badge of honor and a way for the Joker to taunt Batman.

On his other bicep, the Joker has a tattoo of the Batman's bat symbol with a large knife piercing through it. We know he hasn't killed Batman (Batfleck is still safe), but it could be that he got the tattoo after a victory over the Gotham City vigilante. Perhaps he previously succeeded in killing a version of Batman. Or the tattoo could be foreshadowing a showdown to come. (In other words, don't be surprised if the Joker turns up as a villain in the rumored solo Batman movie.)

The Joker's right pectoral/shoulder is nearly covered with a tattoo of a skull jester — the same one Harley has tattooed on herself under the "Property of the Joker." Make of that what you will.

According to Ayer, the Joker's much talked about "Damaged" forehead tattoo is actually a reference to how the Joker was defeated by Batman after he killed Robin. "Joker killed Robin and Batman basically smashes his teeth out and locks him up in Arkham Asylum. It's in the asylum where Joker would have done the 'damaged' tattoo as a message to Batman saying, 'You've damaged me. I was so beautiful before and now you've destroyed my face,'" Ayer explained to Empire . So, "Damaged" is both a hint to the Joker's past and a more personal touch by the director, making it both an Easter Egg and a controversial addition to Batman canon.

Clearly, the tattoos of the Joker and Harley in Suicide Squad are meaningful, but how meaningful is debatable. Sure, Easter Eggs are fun, but the tattoos don't really give any explicit clues as to what's to come for these disturbed lovers. At least, none that we've seen...yet.