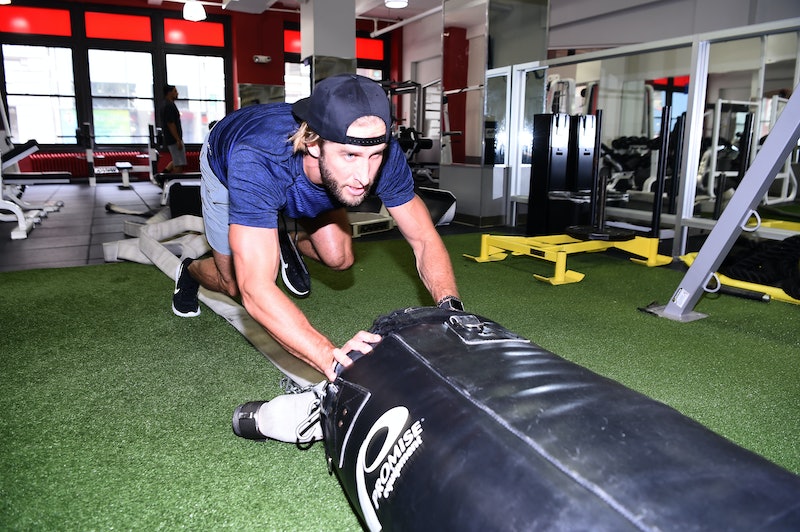 It's 10:30 a.m. on a Wednesday and I'm about to work out with Shawn Booth from The Bachelorette . The 10-minute walk from the subway to the New York Sports Club (NYSC) on 44th st. and 5th avenue in 80+ degree heat already has me sweating. There's nothing worse than looking like you've already worked out when you're on your way to a workout. Except maybe looking that way on your way to workout with personal trainer and winner of Kaitlyn Bristowe's Bachelorette season, Shawn B. But, I did work out with him, and I almost died only one time.

Shawn is the rare type of Bachelor Nation member who was actually doing a job prior to going on the show, and kept doing the same job afterwards. Although, he does admit to Bustle in our interview after the workout that he wasn't just a personal trainer before the show. "I was also heavily involved in real estate and insurance," he says. "I also told [the show's producers] I worked out and did some personal training, so they just went with that … [it's] more sexy than insurance agent."

Well, that, and Joe Bailey already had "insurance agent" taken and Ryan B. was billed as a realtor. But, the personal trainer chyron stuck with Shawn even after he won the show, and is part of what lands him in our NYSC class that Wednesday. He won't be leading the class, but rather working out alongside a smattering of journalists as we are taken through our paces by the NYSC trainers, one of whom is also a cop. The Bravest and Finest Workout is modeled after the kinds of activities firefighters, police officers, and other first responders would have to do in the field. It's part of NYSC's First Responders Appreciation Month, and all first responders can sign up for a free membership for the entire month of August.

So, yeah, it sounds like an overwhelming class to take on as a (very) casual exerciser. In the last year I've done exactly two workout classes, a spinning class that made me want to quit in the middle and this Bravest and Finest Workout that left me too sore to walk for days.

The class is broken down into eight stations and we do one minute at each with a 30-second break in between. There are things like pulling a 90-pound body-shaped bag, which is not at all helpful if I ever needed to actually move a body since it would probably weigh more than 90 pounds.

But, that still sounds way too heavy for me to drag across the floor. We also have to pull a fire hose attached to a punching bag, do step-ups while wearing a weight vest, and more.

If these tasks weren’t intimidating enough already, we are frequently reminded that this is the type of class that actual first responders would take to train. But a few good things happen as soon as the class begins, even though I do kind of pull a Wells in that Bachelorette firefighter challenge at times. You know, the group date he almost passed out on?

For one, I am not as weak as I think I am. I can actually move a 90 pound body. Not quickly, but still. I also can pull the fire hose, push another very heavy dummy to safety, and do kettle bell squats. (You'll note I only listed four of the eight stations. You'll learn why in a moment.)

Secondly, I am so consumed with not failing my tasks that I stop worrying about the fact that I am profusely sweating in front of the Season 11 Bachelorette winner — even though I notice a few times between stations that Shawn is excelling at his exercise with hardly a hair out of place. (He was the original Bachelorette hair gel fan before Jordan and Robby.)

Unfortunately, after the first four rotations I have to stop paying attention to anything else aside from not literally passing out. I'd love to say my faint feeling came from seeing Shawn B. IRL, but it didn't. He is very cute, but I think my real problem lay in not having eaten enough that morning and doing more exercise in 10 minutes than I have in far too long.

At station four I notice that my lips are kind of blue and my finger tips are too, and then I realize I am probably, really, seriously moments away from fainting in the middle of this class, which would be, like, super inconvenient. They'd have to stop the class and call an ambulance and it would be a total drag. I wouldn't wish that level of annoyance on anyone. So I hold it together by kind of sitting out the last four rotations. When we reach the end of the class, I am so grateful to be done, but also annoyed that I can't really complete the class. And not because I am lazy or don't want to, but because I have to make the choice to stay breathing over impressing Shawn (in my dreams, right?).

When the rotation is over, the instructor informs us that we had two more rotations to do. A small part of my (fortunately still-beating) heart drops, but my brain takes over and decides that I can do it. I walk back to the 90-pound bag, resilient in my desire to prove myself as not weak. Thankfully the publicists take pity on me and the other journalists and call for a cool down. In the regular class they do complete everything three times, but it is clear we (or at least I) won't be able to handle that this time around. We can't all be Shawn B.

But, what I am impressed by, besides Shawn B.'s still-perfect hair post-workout, is that I accomplished as much as I did. Looking at the beanbag body before class, I was convinced I wouldn't be able to move it an inch. But I actually dragged it back and forth across the gym multiple times during the minute rotation. And, if I hadn't almost passed out, I think I could have completed the sets, too. Could I have done it three times? No, probably not, but I was willing to try, which said a lot to me.

I'm very quick to write myself off as weak, because it's easier than trying and failing. But I learned that, while my body may not be as strong as I want it to be, my mind is.