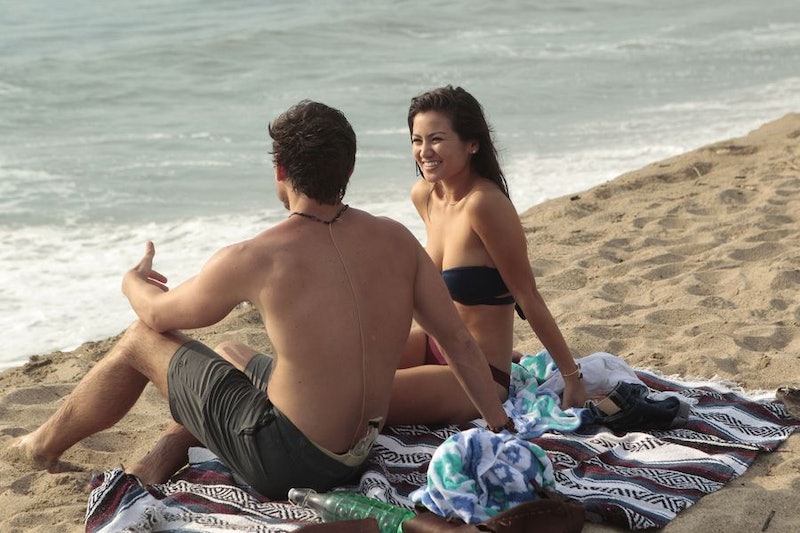 Bachelor In Paradise is a dating show, right? And all the people have dated on it before? I just want to make sure, since when Caila Quinn came into the resort on the show’s most recent episode, every man on the show acted like they had never seen a human woman before. It was like that scene in The Mask where Jim Carrey sees Cameron Diaz for the first time and his tongue falls out of his mouth. Man or woman, no one can stop talking about Caila, and they’re especially complimentary about her hair. OK, fine — Bachelor in Paradise contestant Caila has nice hair, but it’s not more special than anyone else’s hair.

Caila has long, dark locks that seem to curl perfectly, but — spoiler alert — I could (probably) have the same hair if there was a crew who arranged my tresses and makeup before I walked on camera. Nick Viall mentioned something about wanting to wash Caila’s hair for her, but little does he know that there’s no way her hair just dries like that. Does he also want to spend 45 minutes with a blow-dryer, a 2-inch-barrel curling wand, and a finishing texturizing spray? There could also be a possible keratin treatment every six weeks. And don’t forget the detangler — that Mexican shore wind is bound to make things a little knotty. Men just don’t understand the amount of effort that women need to put into their hair — it just doesn’t come that way.

Ignorance is bliss, though, because even the Internet is obsessed with Caila’s hair. STOP THE MADNESS, PEOPLE. It’s just hair.

Clearly, Caila’s hair is her secret weapon — she’s the Samson of Bachelor In Paradise. What would happen without it? I pray Bachelor In Paradise never knows. Caila seems like a nice woman, but I’m not sure why I get the obsession about her hair on Bachelor In Paradise. One thing I will defend Caila against is the rampant jealousy in the resort — Emily Ferguson turned mean girl the minute Caila walked in the room, calling Caila ugly and saying that she was “too perfect,” which I don’t think is an actual thing. Emily needs to stop comparing and putting down other women. Cutting down others won’t make you feel better about yourself, Emily. You gotta start with the inside first.

Look — everyone on Bachelor In Paradise is conventionally attractive. Everyone is lovely and hot and worthy of tonguing on a beach for five weeks and maybe giving a diamond ring to at the very end — Disney Princess hair or not.