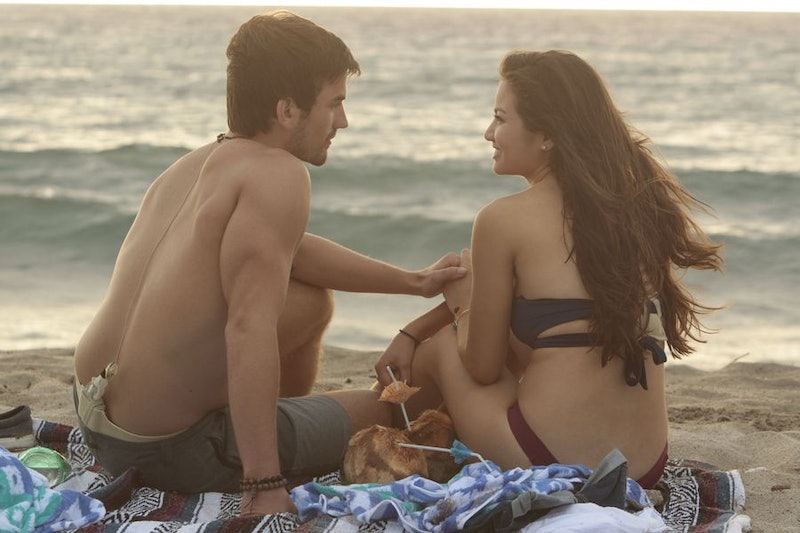 Things always get a little awkward on Bachelor in Paradise when a new cast member shows up, and that's true times, like, 70 on Monday night's episode. After the rose ceremony, it was time for a new lady to arrive in Paradise, and arrive she did. From the second Caila Quinn walked onto that beach, it was game on for Jared... even though he's already had a thing going with Emily. And even though Jared and Caila totally hit it off, it was hard not to be bummed for poor Emily.

Basically, as soon as Caila arrived, she made a beeline for Jared, and after they talked a bit, she decided she wanted to spend her first date card on him. Jared, ever the gentleman, took Emily aside and gave her a heads up that he'd be hitting the ol' dusty trail with Caila. Of course, they went on the most Bachelor date ever — horseback riding on the beach, having drinks on a picnic blanket, you know the deal. They literally rode off into the sunset, looking like a shampoo commercial the entire time, while Emily was left stressing out over what would be in store for her when they got back.

Ultimately, Jared ended up breaking things off with Emily because he wanted to "explore things with Caila," which we basically all saw happening, right? Emily was totally devastated, and understandably so. I mean, wouldn't you be bummed if the guy you thought you had mutual feelings for suddenly ditched you because a better offer came along?

Sigh. Such is life on BiP, and fortunately, Emily is super young and has a lot of time to find true love. So what if it wasn't with Jared? The right guy is out there, girl. He may not be in Mexico, but he is out there.