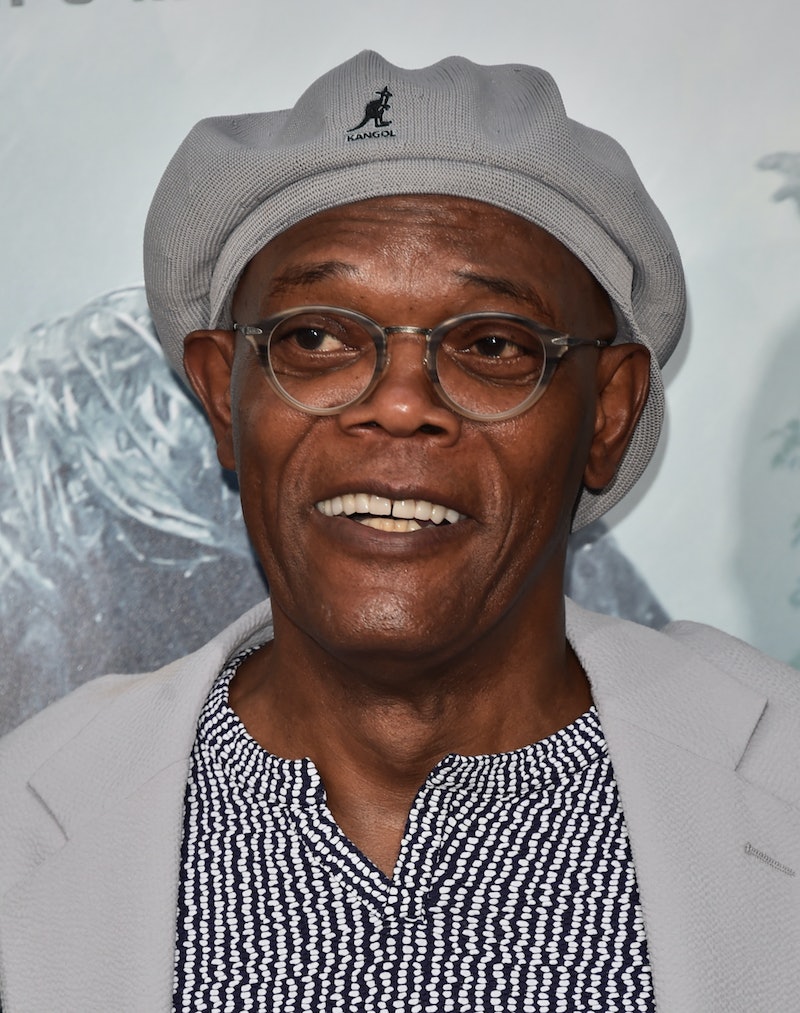 In 2006, Snakes on a Plane gave the world the feature film it desperately needed: an action-adventure about a plane terrorized by killer snakes starring Samuel L. Jackson. It was a winning formula that captivated the internet before the film even premiered in theaters — and it continues to be the source of humor today. There have been so many jokes and parodies about Snakes on a Plane , and I've compiled them in honor of the movie's 10th anniversary. Yep, it's been 10 whole years since Jackson uttered the famous, internet-requested line, "I've had it with these motherf*cking snakes on this motherf*cking plane."

The beauty of Snakes on a Plane is simple: It's literally about snakes on a plane and that's the title. Even before the movie's release, the internet fell in love and meme'd the concept with songs, fan art, fan fiction, and more. Soon, the pre-Twitter internet was clamoring to hear Jackson say that now-famous line, but it wasn't originally in the movie until the buzz mounted throughout the year before the film's release, according to Entertainment Weekly. Years later, the movie is still inspiring jokes and parodies in movies and on TV.

Here are some of the best Snakes on a Plane jokes and parodies.

Lorelai and Christopher went to see the movie and she didn't like it all that much, inspiring the above monologue about how much she hates snakes. (I also can't help wonder if maybe she would've enjoyed the movie more if she saw it with Luke.)

Shane ends his elementary school graduation speech with Jackson's famous line. The adults are horrified, but the kids love it.

Jake schools Charlie about the reasons why Snakes on a Plane is a modern classic film.

The titular crime-fighting writer finds some snakes while trying to crack a case on a plane. Later on, someone even says a PG-version of the famous line.

Louise, Tina, and Gene create a diversion in the sex toy shop they're at by activating a bunch of vibrators and Gene yells, "Snakes on a plane!"

6. "Bring It (Snakes On A Plane)" By Cobra Starship

This song samples Jackson's line and appears on the film's soundtrack, because of course the movie would have a theme song.

Adorable cartoon bunnies hilariously act out the movie in 30 seconds for a quick jolt of nostalgia.

This spoof originally appeared on Good Morning America in 2006.

Abed compares another movie's inability to live up to its hype to Snakes on a Plane in the 2010 episode.

11. The TV Version Of Snakes On A Plane

Probably the best thing about this movie is that in a way, it parodies itself. When Snakes on a Plane had to be edited for TV, the famous line naturally had to be edited — and the choice is so hilarious: "I'm tired of these monkey fighting snakes on this Monday to Friday plane!" What does that even mean?

And thus, the charm and hilarity of Snakes on a Plane lives on, even a decade later.