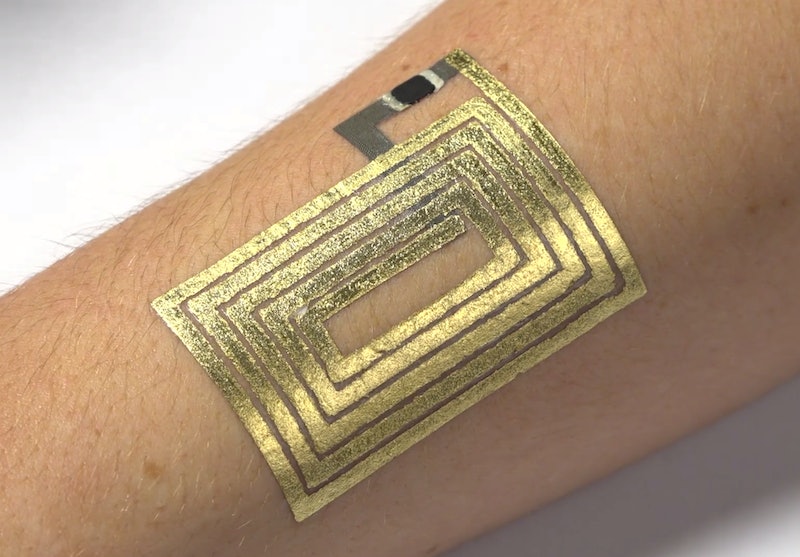 Temporary tattoos are a great option for the body-art-loving commitment phobes among us — All of the flair, none of the permanence! — but removable ink just got way cooler. Researchers from MIT Media Lab and Microsoft Research have developed temporary tattoos that can control electronic devices. Using a process called “DuoSkin,” these tattoos can potentially serve a variety of functions, from controlling music players to communicating with cell phones. And it certainly doesn’t hurt that these metallic tats happen to be super pretty.

In a paper to be presented at the International Symposium on Wearable Computers in September, the researchers explain how DuoSkin works. This isn’t the first time that scientists have tried to create devices that work in tandem with human skin, but DuoSkin is notable for using inexpensive, readily accessible materials like temporary tattoo paper and gold leaf. Gold leaf, in particular, is central to the DuoSkin process — it’s relatively cheap, it’s easy to get, it conducts electricity, and it’s aesthetically pleasing, allowing creators to make temporary tattoos that mimic the look of metal jewelry. (Of course, metallic temporary tats are already quite popular, even without the sci-fi-esque ability to talk to computers.)

In a video for the project, PhD student Cindy Hsin-Liu Kao explains that she and her fellow researchers designed the DuoSkin process to be “accessible for anyone.” Making DuoSkin devices requires a basic graphic design program, a vinyl cutter, temporary tattoo paper, and gold leaf, all items that are widely available. You apply the tattoo the same way you would any other temporary tat — by applying water and slowly peeling away the backing.

The researchers envision three key ways that DuoSkin can be used. The first is as an input device, essentially transforming your skin into an interface. With these tattoos, you can, for example, scroll though music selections, or use your arm as a trackpad, like so:

DuoSkin can also be used to display information. For example, by incorporating thermochromic materials into a tattoo, you can have a tat that changes color according to your body temperature (like the tattoo-version of a mood ring).

Finally, DuoSkin devices can be used to communicate with other devices. These tattoos use a metallic coil in conjunction with a very small chip to make NFC tags containing data that can be read by a phone or other device.

Although DuoSkin devices offer a wide variety of uses, their developers see them as more than simply functional. “In the future, when you walk into a tattoo parlor, you will come out with a tattoo like this,” Kao explains in the video. “They will not only be very sophisticated technically, but they will become an extension of yourself.”