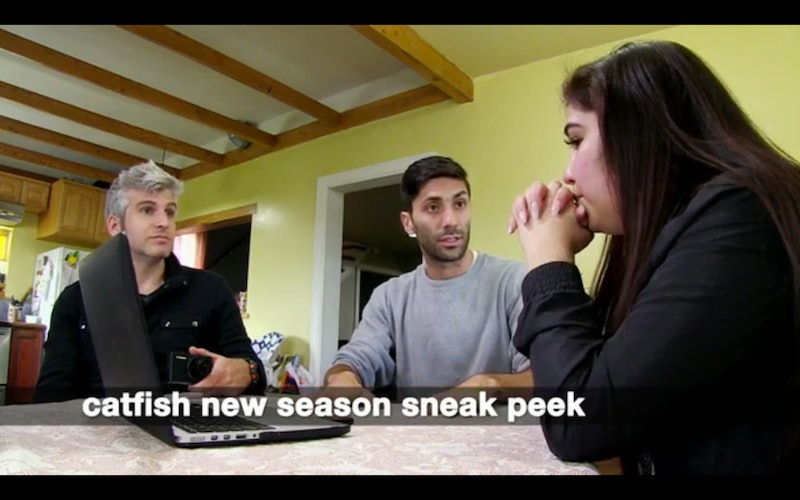 It took the production all the way up to Alaska, but the story of Catifsh's second Season 5B episode, and the relationship between Larissa and Anthony — who turned out to be Jose — is no more. At the end of the second Aug. 10 episode, these two decided to completely cut one another off, a decision that Larissa revealed she had stuck to during the end-of-episode Skype check-in. It was a triumphant ending for Larissa, who managed to hunt down the guy who manipulated her across several states and was even able to put enough pressure on him that he returned the $500 he borrowed from her during their relationship.

Since the episode filmed months ago, it seems that Larissa and Jose have continued with no contact and the relationship is still firmly over. Sure, it's not the stuff of romance novels, but it is the stuff of empowering, women-can-do-anything novels, which are just as great. And if you're worried about how Juan is doing, it seems that things have possibly turned around for him as well. Here's an update on what they've both been up to since ending their online relationship.

Larissa Has Receded From Public View

I think it's for the best that Larissa doesn't have an easily accessible Facebook or Twitter page. After getting Catfished twice, it seems like the smartest and safest option. While there are quite a few Larissas in Yakima, Washington on social media, this one doesn't seem to be among them.

I'm glad that Larissa got the chance to be on Catfish. Now, she should be more aware of the signs that she's dealing with someone who is up to no good and won't be tricked a third time.

Jose Seems To Be Doing Better

While it's pretty cruel to trick someone with a Catfishing scheme, especially one as obvious as this one, Jose is updating his Facebook page with some real photos that look like him, and hopefully is no longer hiding behind fake identities.

And He's Still In Alaska

Also according to Jose's public Facebook, he's still based in Alaska. Even though the rest of the episode was negative, the landscape was absolutely gorgeous. So Jose has some beautiful views to enjoy, even if he doesn't have a fake relationship to occupy his time.

Hopefully Larissa Is Reaching Out To More People

She lives in a very secluded farming town, and one of Larissa's complaints during the episode was that her stepfather controls her access to the Internet. With those restrictions, it's no wonder that Larissa was reaching out to someone — anyone — who spoke to her online. Post-Catfish, it seemed like Larissa was getting out there more in person, and her lack of posts online backs that up.

The Season 5B dual premiere offered twice the chances for Nev and Max to throw the smackdown on total jerk Catfish. And while Jose wasn't quite as bad as Zac, the guy who scammed literally hundreds of women, Nev's rant about him borrowing Larissa's money has made the Catfish hosts even better at laying into the Internet's biggest liars, so I can't wait to see what else this season has in store.