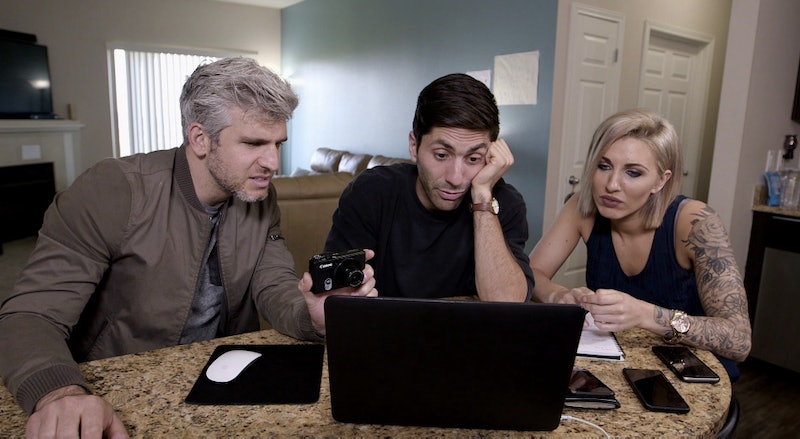 It was only a matter of time before Catfish presented us with a Tinder love story, and the season premiere has finally brought us one — and it's starring someone you might actually recognize. This time, former Playboy model Jayme Nelson is the victim, and she needs to find the truth out about a guy named Lucas she met on Tinder and quickly fell for. So what will happen when this season's first couple on Catfish , Jayme and Lucas, finally come face to face? First, Nev and Max will have to find out his true identity.

So basically, Jayme and Lucas met on Tinder, and their connection is especially important to her because she has a hard time meeting men who can accept the fact that she's a single mom and a dancer. But Lucas did, and he looks super attractive in his photos. So what's the problem, then? He's definitely not who he says he is. After he moved to Jayme's town, he avoided spending time with her, which has made her pretty suspicious of him. And after a Snapchat led to a reverse image search, she found out that Lucas is actually using someone else's photos — you know, the story we've heard on so many Catfish episodes before.

Fortunately, Jayme has come to the right place, and Nev and Max are able to track down a dude named Zach on Facebook who fits Lucas' description. The next step? They decide to Catfish him in order to find out more info. So they send women on the MTV crew to follow him on Instagram to see what happens, and lo and behold, he accepted. Once they could access his followers, they discovered he's only following women. This is so much bigger than just Jayme, and now that another woman who's been fooled by him, Urszula, has joined the hunt, things are getting real. According to what he told her, he's catfished over 400 women, and to him, this is just an experiment. THE WORST.

After sending Lucas — aka Zac — a text with a photo of all the women together, he replies that he'll be happy to meet them at his parents' house. He actually came clean pretty quickly that he used "Lucas" to find out what the Tinder response would be to a more attractive guy, but that explanation isn't OK... especially when Nev and Max find out he's been recording their entire conversation. So Nev takes Zac's phone, finds lists of women he's talking to and the status of his relationships with him. Whoa.

Oh, and he has photos of them nude saved on his phone. NBD.

In the end, Nev, Max, and the women go back to talk to Zac again to try to drill the point home that he's done some serious emotional damage to the women he's fooled. He doesn't seem to understand why they care so much and even calls him childish. Will this guy ever realize how wrong he is?! Maybe not, but he did allow Nev and Max to announce that he's fake on his Instagram before changing the password. It's over! For now, anyway.

How is it possible Catfish keeps bringing us new ways to get tricked on the internet? BRB, hiding from social media forever. Or maybe just for the next five minutes.