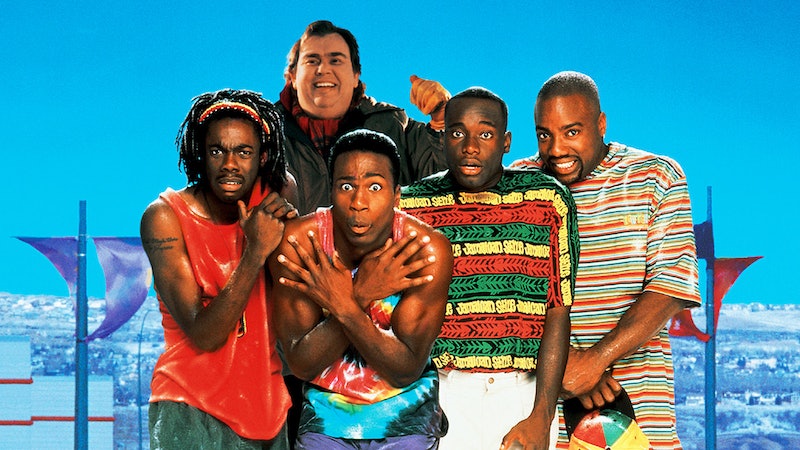 Jamaica is making headlines at the Rio Olympics, with several of the country's runners solidifying their reputations as the fastest people alive. Usain Bolt won his third straight gold medal in the men's 100 meter run on Sunday, maintaining his "Fastest Man in the World" status, and just a day before that, Jamaican Elaine Thompson earned the title of fastest woman in the world by beating out fellow Jamaican Shelly-Ann Fraser Pryce in the women's 100-yard run. With so many Jamaican runners making waves in Rio, I can't help but recall one of my favorite childhood movies that told a very different story of Jamaican Olympians: Cool Runnings.

Cool Runnings, if you haven't seen it (and if you haven't, get on that right away) tells the inspiring and hilarious story of the first ever Jamaican bobsled team during the 1988 winter Olympics. Warm island nations don't typically pop into one's head when thinking about icy-cold winter sports, but that's part of what made the movie so funny and so special. It's the ultimate fish out of water story, and as we, normal, un-godlike humans, watch the Olympics from the comfort of our sofas, it's nice to remember that not everyone starts out in the games as a champion, or even expertly knowing how to play their sport. Watching the Jamaicans in Cool Runnings try to navigate the world of bobsledding, having never attempted it before, is not only gut-bustingly funny, but also a great reminder that we all have to start somewhere, and only through practice and determination does anyone, even amazing athletes, succeed.

Cool Runnings stars Leon Robinson, Doug E. Doug, Rawle D. Lewis, and Malik Yoba as the four-man team. Loosely based on a true story, it begins when three young Jamaican sprinters fail to make the Olympic Track & Field team during the 1988 trials. But they still hold onto their dreams of competing at the Olympic Games. So the trio recruits a pal, the island's champion push-cart driver, finds themselves a coach, and together they become the country's first ever bobsled team. Though they face plenty of hardships along the way, like a total lack of support, training, and funds, plus the fact that they've never bobsledded in their lives, the team makes it to the 1988 Olympic games in Calgary to compete. It's a moving story with loads of humor, and charming characters that each have a part to play in the team's success.

Interestingly (and fittingly, for the Rio Olympics), the film connects the world of track and field to bobsledding. In the movie, John Candy plays an American bobsled coach who comes up with the idea to recruit sprinters to his sport, theorizing that their speed would give them an advantage during the push-off that starts a bobsled race. The connection between Jamaicans and track and field success is undeniable; as Jamaican Orlando Patterson wrote in The New York Times , the secret to so many of them being skilled runners is a combination of an annual sports competition called "Champs" and the country's focus on health. And in addition to excelling at track & field, other sports that utilize running, such as basketball, cricket, and rugby, all of which have become popular in Jamaica, benefit from the country's focus on speed training, too.

Cool Runnings may have been only loosely based on the true story of the bobsled team, but in the real world, the team's efforts during the 1988 games paid off — hugely. The country returned to the Winter Olympics again in 1992, 1994, 1998, 2002, and 2014, even beating out the American, Russian, and French teams at the '94 Games in Lillehammer, Norway. Facing adversity and doubt from their own country as well as others in competition was well worth it for the Jamaican bobsledders, and the message of Cool Runnings rings true today, especially as Rio goes on. The film's athletes may have started from the bottom, so to speak, but because they stick together, believe in each other, and don't give up, they find massive success — which is what being an Olympian is all about in the first place.