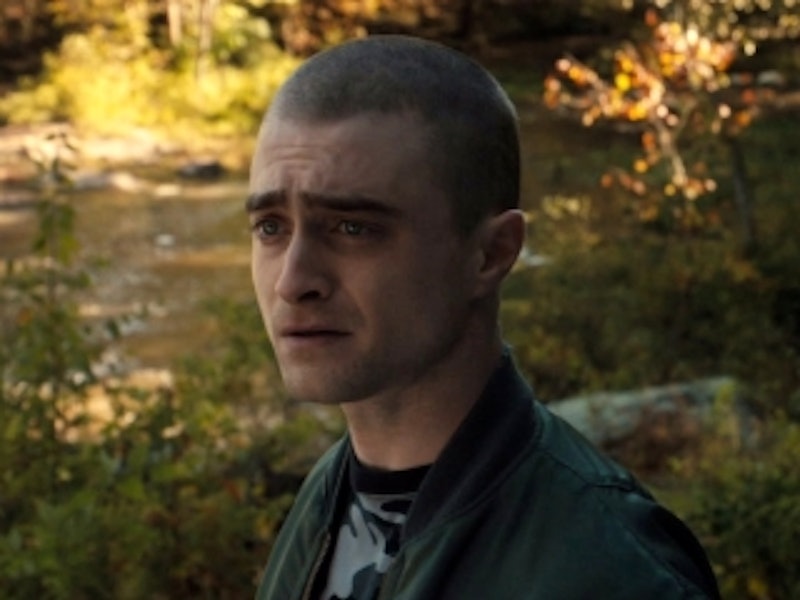 Daniel Radcliffe really wants you to know he's not Harry Potter anymore. The 27-year-old actor has starred in several decidedly adult films since leaving the franchise that made him famous; like the dark and twisted Horns, the fart-driven dramedy Swiss Army Man, and now his most grown up role yet in the intense drama, Imperium. In the film, Radcliffe portrays Nate Foster, an FBI agent who goes undercover with American Neo-Nazis. The film certainly seems like it's based on a true story, but is Daniel Radcliffe's Imperium character a real person?

Despite the grounded and realistic plot, Nate Foster is not a real person. The film is a work of fiction, written by first-time screenwriter/director Daniel Ragussis. However, that doesn't mean there's no truth to the story. Ragussis based his story on the experiences of FBI agent Michael German, who spent a year undercover with white supremacists. German wrote a book based upon his experience called Thinking Like a Terrorist: Insights of a Former FBI Undercover Agent, and after Ragussis read the book, he reached out to German for help in creating Imperium. The two of them together then came up with the basic story for the movie.

It was important for German to get the depiction of an undercover agent right in the film, since that's something rarely done correctly in movies. "They’re not typically a superhero,” he tells L.A. Weekly's April Wolfe. “They don’t have superhuman strength or incredible fighting skills that can get you out of trouble. You’re almost always outnumbered and outgunned, and the idea of fighting your way out of a problem is far from reality. You’re going to have to figure a way to convince the people that you are who you say you are, and you’re going to have to work out difficult situations by using your personal skills rather than physical." This is why German considers Radcliffe's casting to be a "stroke of genius," since he's not the action star you usually see in these types of roles.

German also wanted to depict white supremacists accurately, since the best way to fight terrorism is to understand the terrorists' point of view. "They are prolific writers,” German says of the Neo-Nazis he knew. “They had all kinds of philosophy and theology manuals on how to engage in acts of violence, and it’s those materials that allowed me to interact with them in a way that made sense ... One of the things I learned from doing this work is that terrorism isn’t nihilistic violence. What terrorists hope to do is provoke the government to take actions that are against its interests. Part of the reason terrorists have these manifestos and literature that names names is so the government will know who to take repressive action against. Once that happens, the terrorists can build a legitimate grievance with the government and expand the divisions that already exist.”

So despite the very real place where the story comes from, Imperium is ultimately a work of fiction. And that means Daniel Radcliffe's character, Nate Foster, is a work of fiction, too — but he's still probably the most realistic FBI agent ever seen in a film, thanks to Michael German.