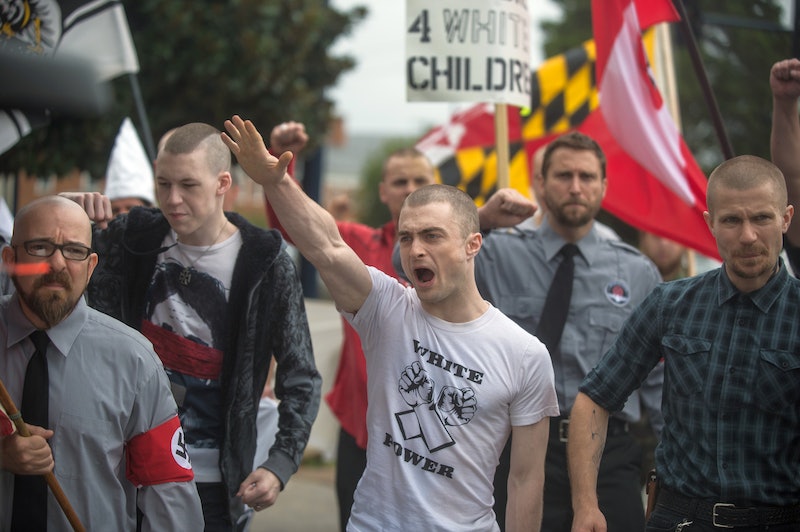 There's no colder "hot take" than the assessment that Daniel Radcliffe has stretched his creative wings to an impressive degree since hanging up his Hogwarts robes. In fact, there must have been something in the pumpkin juice on that set, since his Harry Potter co-stars too have, for the most part, resisted type-casting and have built eclectic, grown-up careers. The now 27-year-old actor certainly hasn't hasn't been static (or "Petrificus Totalus," in HP terms), but Radcliffe plays his most intriguing role yet in Imperium . The thrilling drama follows FBI agent Nate Foster (Radcliffe) as he dives undercover to diffuse the violent plans of a radical white supremacist group. In an election year where hate speech has been spun as political rhetoric and issues of race and oppression expose how deep divides can be, this movie and this part are immediately relevant.

Which might come as a surprise, considering t the real events that inspired the movie occurred years ago. Radcliffe's Imperium character is loosely based on former FBI agent Michael Gelman who infiltrated white supremacist groups and right-wing extremist groups during his tenure with the agency. In 2008, he distilled his experiences and the takeaways that he believed could drastically improve the United States' ability to prevent terrorist attacks into a book called Thinking Like a Terrorist: Insights of a Former FBI Undercover Agent. German had resigned from the FBI in 2004. The next year, he wrote an op-ed for The Washington Post explaining why: what he saw as the ongoing failure of the agency to monitor the larger conspiracies behind "Lone Wolf" domestic terror attacks. German wrote:

Lone extremists pose a challenge for law enforcement because they are difficult to predict. It's like searching every haystack for a needle. Perhaps we'd have better luck if we paid more attention to the needle factories.

German has a "Story By" credit for Imperium. According to LA Weekly, writer/director Daniel Ragussis reached out to German after reading Thinking Like A Terrorist and the two men developed the arc of the feature together. Radcliffe's casting and performance met German's approval. The former agent tells LA Weekly that it was on Radcliffe to “embody that strength in [the character's] conviction, but also the vulnerability a person at great risk at all times would have.” Foster is a highly trained operative, but he's no superhero. Physically, Radcliffe fits the part. No bulking up with a Michael Phelps-ian diet plan, the actor cuts his familiar stature. And the compulsory neo-Nazi buzz-cut makes his expressive eyes look even larger and more alarmed.

"We are a thinking man's soldiers," one of the white supremacists tells Foster in the Imperium trailer. Radcliffe isn't playing a cop who's trying to prevent a heist or a investigate a crime of passion. He's in bed with a group of individuals who believe without a doubt that they are saving the world and they will stop at nothing to preserve their bigoted ideology. Earlier this month, The New York Times shared a shocking three-minute super cut of sexist, racist, explicit insults and chants recorded at rallies to support Donald Trump. The people filmed show no hesitancy about airing these opinions in public or being caught spouting slurs on camera. And that boldness is terrifying. Imperium is a work of fiction, but it deals in current issues of fear, aggression, and mob mentality. In previous roles, Radcliffe has played a beat poet, a corporate climber, and even a corpse, but none of his past work has been as timely as this thriller.