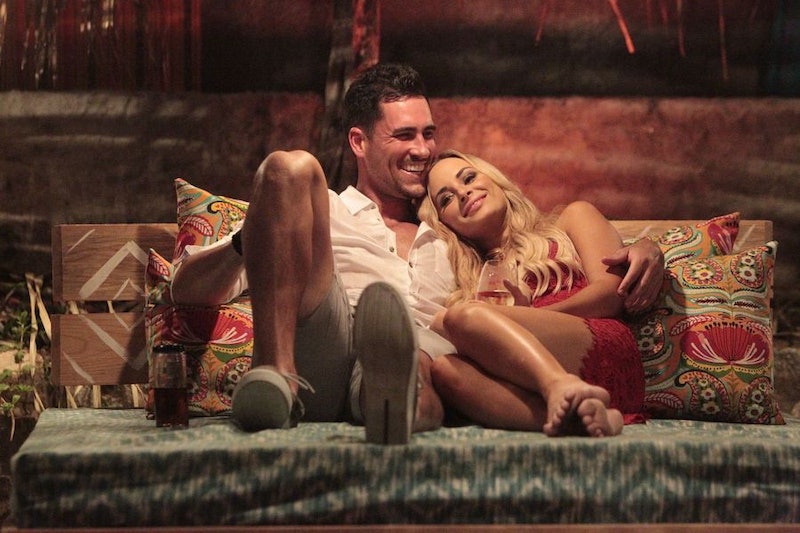 If there's one thing the Bachelor franchise features more than roses, it's drama. A good meaty feud between contestants can make a televised search for love incredibly juicy and thanks to spinoffs of the popular Bachelor and Bachelorette series such as Bachelor Pad (RIP) and Bachelor in Paradise, feuds can span over multiple shows. That's exactly what's happening in Paradise right now, as Season 3 tells a gripping tale of love and jealousy between Josh Murray and Nick Viall, a feud with a long history that viewers new to the franchise may not fully understand.

Josh and Nick competed for the heart of then-attorney Andi Dorfman on Season 10 of The Bachelorette. They were both frontrunners on the show, as Nick got the first impression rose and Josh clearly made Andi nervous. After not being buds all season, Nick lost to Josh in the season finale. On the live show After the Final Rose, Nick asked Andi this now infamous (in Bachelor circles anyhow) question: "If you weren't in love with me... I'm just not sure why... like why you made love with me?"

This question sent Josh on a series of interviews (with his then-fiancée Andi) in which he laughed off Nick and his choice to out this part of his relationship with Andi. In addition, a video was released while their season aired that appeared to show Nick talking poorly about Josh as he flew home from the show:

It became clear after filming The Bachelorette that Josh and Nick had a thorny relationship. Now, cut to Bachelor in Paradise. Nick and Josh are once again interested in the same woman. This nothing new in Paradise, but with their history, the tension was more intense. Of course, it seems that Amanda (the lady in question) ultimately made her choice (Josh), but some animosity has continued since filming ended.

In an interview for AfterBuzz TV, Nick made fun of Josh's island makeout style, saying "he moans." Nick also criticized Josh's Bachelor in Paradise approach. Josh, on the other hand, has taken to social media to claim that his negative portrayal on the show and comments about Nick came from editing:

Nick addressed this in his AfterBuzz interview by discussing his own history with the editing process on The Bachelorette:

"Josh has referred to the editing. I would disagree ... On my first season towards the end of filming, we were still filming, I got in some confrontations with the guys. And I was very much worried about how I might look. And I had this conversation with a particular producer. And I asked him about things like editing and he had this answer for me, he was like 'Nick, there's no such thing as an edit'... Over time I've come to appreciate what he meant. And I would tend to agree with him... The show definitely tries to tell the story that happened."

Still, Josh has actually said some positive things about Nick recently. He even tweeted his support for Nick and Jen during the Aug. 16 episode, and when a fan replied to ask if there was a "beef" between them, Josh replied, "not on this end, happy for everyone."

Reality shows tend to bring the maximum amount of drama possible, but these post-show interactions can give viewers a better idea of how contestants really feel. In this case, it seems that Josh has moved past the negativity we're seeing on BiP and is trying to put his drama with Nick behind him. Josh and Nick may not exactly be friends, but I wouldn't be surprised if we see their feud simmer down this season and watch that dislike turn to — at the very least — a willingness to put up with each other.