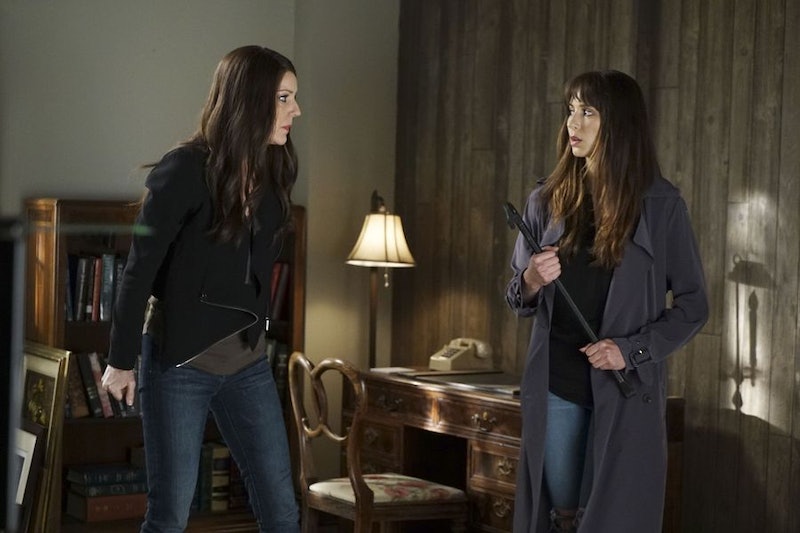 The DiLaurentis family tree has plenty of tangled branches, and could one of these branches lead to a Hastings? No, I'm not talking about Jason — I'm talking about one of the Liars could be part of Alison's very twisted family. Not long after revealing that Jessica's identical twin Mary Drake is really Charlotte's biological mother, Pretty Little Liars pulled out yet another family secret when it told us that Charlotte had a biological sibling and Mary had another child. Though we don't yet know this person's gender, we do know that they are roughly the same age as the Liars — but could one Liar actually be that child? Tuesday's episode "Exes And OMGs" fueled the theory that Spencer could be Mary's other child, and I'm starting to get really suspicious of this Liar.

Fans have considered the possibility that Spencer is really a Drake ever since Mary and Spencer's first interaction in the Season 7 premiere. Their first interaction was strangely clouded with talk of family: Mary even said that she had a lot in common with Spencer's parents, and that her parents were "excellent secret keepers." Later in the season, Mary tells Hanna that "every family has secrets" and that "sometimes, those secrets are people." It's an odd sentence given what she just told Spencer, who does bear a striking resemblance to the dark-haired Mary.

It's not the only thing that suggests these two are related. The Aug. 16 episode saw Spencer and Aria visit the doctor who delivered both Charlotte and her mystery sibling, and though the doctor didn't provide much information, he did have a message for Spencer to relay to his daughter. The message essentially said that she could pretend to be other people and run away from family, but "you can’t deny human nature" and ultimately, she'll crave her real family connection. Though the message wasn't intended for Spencer, could it be foreshadowing?

Maybe, especially given the very interesting ending of the episode. At the end of "Exes And OMGs," we see Spencer flipping through a family photo album, seemingly appreciating her often MIA family. Is that all there is to this scene, or could Spencer discover after looking at this family album that she's not really a Hastings after all?

When you really think about it, it would make a ton of sense for Spencer not to be biologically related to the Hastings. She has often felt like the odd person out in her family, so maybe PLL has been hinting that she's actually a Drake for a long time now. It would also explain the bizarre dislike that Jessica has seemingly felt for Spencer: if Mary and Jessica were always at odds, Jessica would likely detest Mary's daughter as well.

Only time will tell whether Spencer is truly a Drake, but Pretty Little Liars is dropping not-so-subtle clues that something suspicious is going on here.