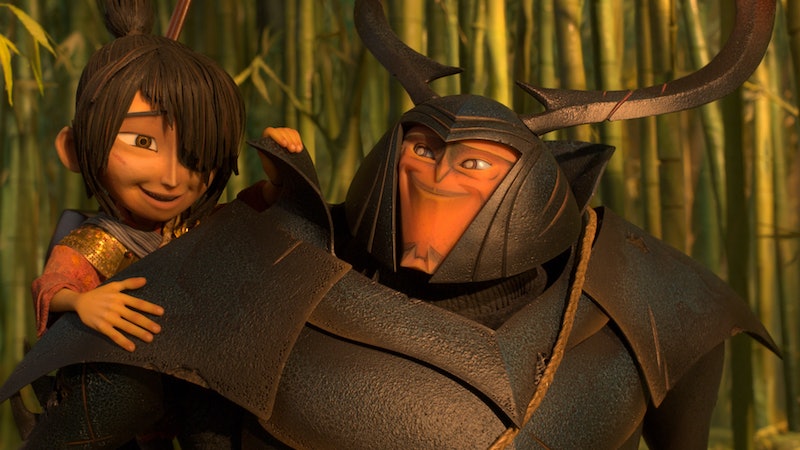 The animated successes to come out of the summer 2016 season have been until now relatively contemporary. Domestic animals schemed and traded barbs in The Secret Life Of Pets . Pixar took audiences back to the Great Barrier Reef for a Finding Nemo sequel centered around memory-challenged blue tang fish, Dory. Kubo And The Two Strings premieres Aug. 19 and brings a more whimsical, story-book quality in comparison. In the film from celebrated animation house LAIKA (Coraline, The Boxtrolls) is set in ancient Japan and details the quest of a young boy to find the enchanted armor of a father he never knew. Kubo's story sounds like the plot of a children's book, or even of a fable passed down through generations. Is Kubo And The Two Strings based on an existing story?

Don't go hunting for a Kubo storybook on Amazon. The movie is not adapted from any source. The original screenplay for Kubo And The Two Strings was written by Marc Haimes and Chris Butler, with a "Story By" credit for Shannon Tindle. According to his biography for the VIEW VFX and computer graphics conference where he was a guest, Haimes recently transitioned from a studio suit job at Dreamworks to being a full-time screenwriter. Kubo is his first major studio script to make it to the screen. Coming up, he's attached to the film adaptation of the comic Nimona. Chris Butler wrote the script for LAIKA project Para-Norman and also directed. Shannon Tindle served as a "character designer" on Kubo and Coraline and on several animated TV shows.

The plot of Kubo And The Two Strings has all the elements of a coming-of-age story with an extra hint of magic. Kubo is already a boy matured beyond his years when the action picks up. He is the caretaker for his ill mother, but is separated from her when a long-dormant spirit threat comes to collect on an old deal. Eager Beetle (Matthew McConaughey) and demanding Monkey (Charlize Theron) are Kubo's mentors and protectors as he searches for the legacy left behind for him by the greatest samurai ever: his dad.

In an interview with The Mary Sue, director Travis Knight says that the nugget of the Kubo story has been nurtured by the whole LAIKA team for about five years. He says:

The original idea for the story sprang from the fertile mind of our brilliant character designer, Shannon Tindle, and even though it was early and raw, the original pitch…there was something about it that was really exciting and evocative. Stripping it down to its most reductive state, the idea of a stop-motion samurai epic was something that was really cool.

Knight goes on to tell The Mary Sue that his own childhood interest in Japan, visionary auteur Akira Kurosawa, the manga Lone Wolf And Cub, and fantasy epics as a genre all played a role in the fleshing out of this particular adventure. (To reiterate, Knight does not have a writing or story credit on the film.) He also addresses the controversy of a Japanese story being brought to the screen by a primarily white creative team. Knight says:

Any time that you are looking outside of your own experiences, you want to make sure to capture it as accurately as possible. So, we did a heavy amount of research, and we brought in a lot of consultants and experts...Art is one of those few things that crosses cultural barriers.

Trading in themes like a brave boy fulfilling his birthright and a vengeful ancestor looking to finish off a job, Kubo And The Two Strings also betrays Marc Haimes's lingering fondness for the epic films that shaped him as a child. Particularly, as he indicated to Variety, The Empire Strikes Back. The screenwriter had no interest in dumbing down this material for a youthful audience. "It was my ambition to create those moments that really challenge a kid," he told Variety, "and expand their definition of how stories and storytelling works."

Who knows? The original story of Kubo And The Two Strings could end up inspiring a whole new generation of filmmakers.

More like this
Harry Potter's Viktor Krum Has Undergone A Huge Transformation Since Hogwarts
By Sam Ramsden and Meguire Hennes
Is 'The Woman King' Based On A True Story? The Female Agojie Warriors Did Exist
By Radhika Menon
Netflix Reveals First Look At Wednesday In The 'Addams Family' Spinoff Series
By Bustle Editors
'Survivor' Is Finally Coming Back To UK Screens
By El Hunt
Get Even More From Bustle — Sign Up For The Newsletter