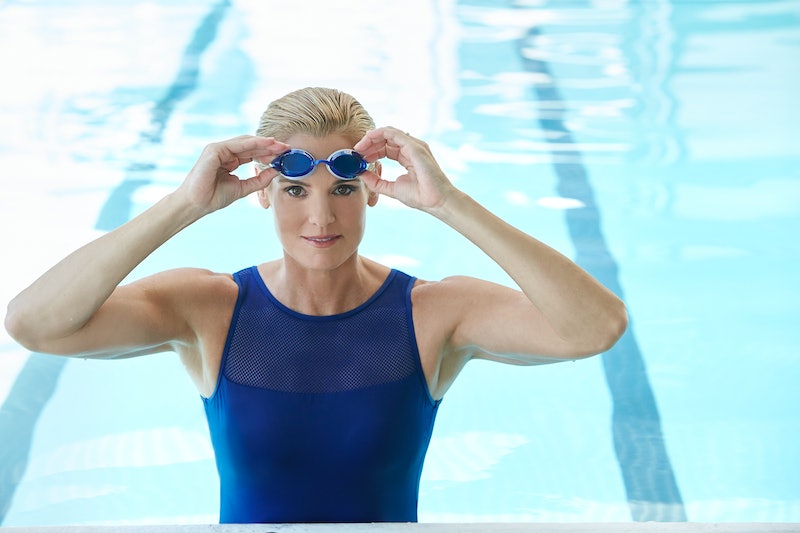 When we start to come to the end of any Olympics season, we can't help but wonder what the incredible athletes will get up to next. One Olympic legend we're always keen to hear more about is Dara Torres, American swimmer and 12-time Olympic medalist, who has shattered all sorts of stereotypes about female athletes over the years. She kicked off her badass streak pretty early; she was only 14 when she broke her first world record, and that was her first of three. In 2008, at the age of 41, she surprised everyone by making a massive comeback from retirement at the Beijing Olympic games. Not only did she make an appearance, she won three silver medals.

Since then, Torres has proved to the world that she's not stopping anytime soon. She's published two books: Age is Just a Number: Achieve Your Dreams at Any Stage in Your Life in 2009, which was named one of the top 25 best-selling business books, and Gold Medal Fitness: A Revolutionary 5-Week Program, which became a New York Times bestseller the very next year. For the 2016 Rio Olympics, she was the captain of Team Kellogg's, an initiative by Kellogg's that allowed Torres to mentor and encourage competing athletes on their way to gold. She hosts TV's first all-female sports talk show called We Need To Talk, and she's even strutted down a runway to raise awareness of fatal heart disease in women.

Although she's a highly accomplished woman (and unstoppable legend), what many people may not know about Torres is that she was diagnosed with psoriasis more than 20 years ago. Torres tells Bustle that when she first started exhibiting symptoms, she thought she was simply dealing with a rash. "I had red, flaky patches on my elbows and on my back," she says. After realizing that it was spread out evenly, she decided to see a dermatologist, who identified the condition as psoriasis.

Torres says her psoriasis used to flare up right before a big swim meet (flare ups are extremely common under high levels of stress) and she was extremely self-conscious about having to put on a swimsuit with noticeable red patches on her skin. To make matters worse, other swimmers wondered aloud whether they would catch this disease if they swam in the same pool as her.

But instead of hiding, Torres is back in the spotlight after launching a campaign with Celgene and Otezla called Show More of You, which aims to raise awareness about the autoimmune disease.

Psoriasis is a chronic, systemic skin condition that affects about 7.5 million Americans. Due to faulty signals from the immune system, this disease causes cells to grow at a rapid pace, resulting in dry, flaky skin, red patches, itchy skin, and, in some cases, raised areas on the body that are covered in silvery scales. It usually first appears between the ages of 20 and 30, or 50 and 60. It's widely understood to be a genetically transmitted disease, as most people with psoriasis have an immediate family member who also suffers from this disease.

Jennifer C. Cather, M.D., dermatologist at Modern Dermatology - Aesthetics Center, tells Bustle that this disease can be very difficult to handle as a woman, because there's a lot of shame and guilt around the visibility of it. "Nine out of ten patients have reported feeling embarrassed," Dr. Cather says. "They don't like being out in public. It kind of changes what they wear a lot of times."

Torres says her psoriasis used to flare up right before a big swim meet (flare ups are extremely common under high levels of stress) and she was extremely self-conscious about having to put on a swimsuit with noticeable red patches on her skin. To make matters worse, other swimmers wondered aloud whether they would catch this disease if they swam in the same pool as her.

It's important to know that psoriasis is not contagious, and that's one of the things Torres and Dr. Cather want people to understand from the Show More of You campaign. "You have to get over that initial embarrassment and fear of people thinking that it's contagious," Torres says. She thinks the more people are educated about psoriasis, the less people with the disease will suffer from the discomfort of presenting themselves in public.

When asked what her biggest motivation was in heading this campaign, Torres tells Bustle it was "to really get the word out there about what psoriasis is and let people know that it's OK if you have [psoriasis]." She wants everyone, whether you put on a swimsuit or a business suit in the morning, to feel inspired to show more of who they truly are.

Dr. Cather insists that anyone can get involved in this movement, regardless of whether or not you have psoriasis. You can start by visiting the Show More of You website, where you can learn more about this autoimmune disease, as well as share an inspiring picture of yourself. It's an online space that's full of positivity, acceptance, and education. Torres hopes this campaign will encourage everyone to prioritize their health, and to have confidence about their body.

Most importantly, Show More of You is meant to inspire people with psoriasis to seek the treatment they need, whatever that may be. "People go to great lengths to hide it," Dr. Cather says. She has seen far too many women who wear long sleeves during the heat of summer and don't tell their doctors about the pain they're truly in, all because they're too embarrassed. You can't get the treatment you need unless you're honest with your medical provider about what's going on. "I don't want people to hide it anymore. It's time to live."

Images: Show More of You