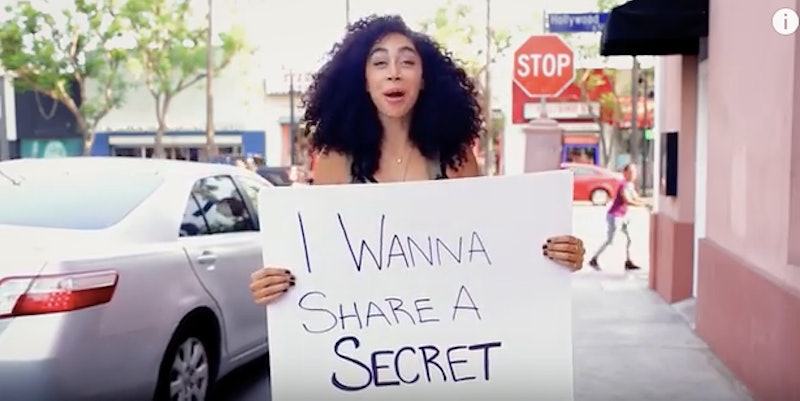 It's amazing how many people have never had an STI test. It's so important. But still, people far too regularly don't get tested — or don't even use a condom in the first place. And the stigma around STIs remains out of control. That's why I'm so impressed by this video tackling a really taboo subject: How I Got An STD.

The video is part of a series MTV and Trojan launched in July leading up to the VMAs to help Millennials tackle all the difficult parts of sex and dating we're facing in 2016. The digital series, hosted by YouTubers Shannon Boodram (clinical sexologist) and Josh Leyva, is meant to be educational, fun, and honest.

This video is particularly brave because Boodram publicly — and I don't just mean on the internet, I mean in public on the street — talks about how she got an STI. "It felt insanely nerve-racking, even more so than I thought it would when I came up with the concept," Boodram tells Bustle. "It's a story that I didn't think I'd ever share not because of how I felt about it but how I knew it would make others feel about me, but during the beginning conversations I had with Trojan and MTV my attitude somehow changed from 'this could hurt me' to 'this WILL help others'. But even with that thought, omg I felt so so exposed and judged!"

You can see the whole video here:

Here are some of the highlights:

I told you it was public — she's literally talking about it on the street.

She explains that she's a survivor, not because it's a disease but because there is such a stigma she had to deal with having an STI. Despite how prevalent they are, we still just have a terrible way of dealing with them.

"I do one-on-one counseling via Skype and work with a lot of people who have herpes, their number one concern isn't dealing with their condition but simply thinking about how to tell others," she tells Bustle. "You need confidence and in order to gain confidence you need to practice. Even though my STI was curable I still tell any potential partner because I want them to understand why protection is SO important to me."

She starts dropping facts. And she's right, despite how high the stats are, we still act like they happen to other people— but one in two people under the age of 26 will contract an STI, that's half of people, guys. You know people it's happened to.

This is why we need better sex ed. One in four teens is way too many.

This is where things can get really scary — only 50 percent of women who have chlamydia show symptoms. When people talk about the importance of getting tested, this is why. You can appear perfectly healthy and still be carrying an STI— and spreading it.

Shannon really drives this point home because she found she had chlamydia when she was in a committed relationship and they had both tested clean before. Which means, she found out she had chlamydia and found out her boyfriend was cheating her at the same time. No matter how much you trust your partner, your sexual health is in your hands.

It Only Takes One

"A lot of people think dropping the condom is a sign the relationship is going in the right direction… I think my video serves as a great example of how stupid and dangerous this thought process is," she tells Bustle. "At the end of the day choosing to protect your partner is true intimacy. It's peace of mind through protection, and taking control of your sex life together!

And if you have an STI? Boodram offers this important advice: "Forgive yourself, acknowledge what you can do different going forward, learn EVERYTHING you can about your STI, seek treatment, and start practicing how to dialogue about this with future partners," she tells Bustle. "The last step is often overlooked but very important."