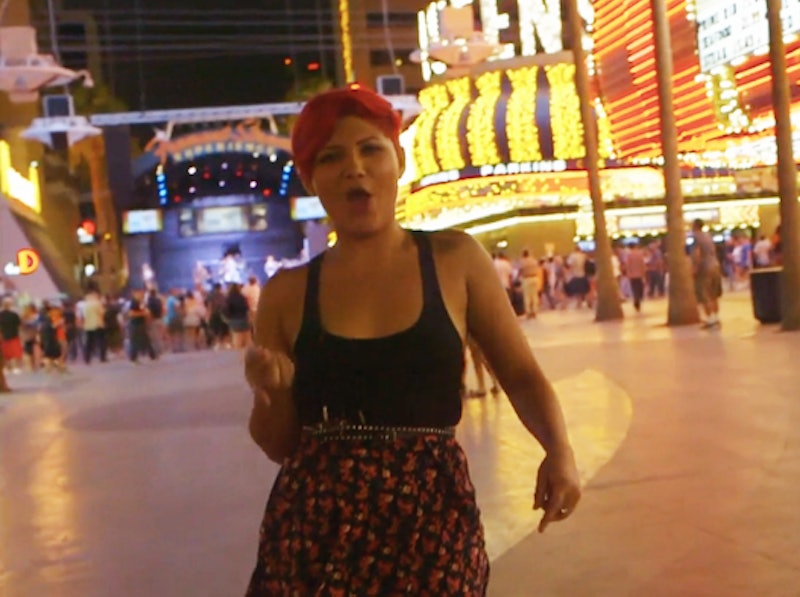 If we're lucky — and many of us are — we don't have to deal with terminal illness in our lives, either for ourselves or with a family member. But terrible diagnoses strike, and illness becomes a part of daily life. The CW is focusing on how some people choose to deal with their illnesses in a new, limited docu-series, My Last Days, hosted by Justin Baldoni of Jane the Virgin. I can't imagine how hard it must be to manage a condition so serious; allowing people to film the results must be even more difficult. So, who is My Last Days ' Kat Lazo, featured in the episode airing August 18?

Lazo is a lesbian, a Beyoncé fan, a traveler, and a foodie, according to a press release by the CW. She also has terminal gastric cancer. While this keeps her from enjoying some of the foods that she loves, the 25 year old is still determined to "live colorfully," the network says, and "she consistently inspires people with her vibrant personality and zest for life." While it's strange to meet someone so quickly before they depart, here are a few more things to know about Lazo.

1. Her Diagnosis Is Uncertain

Lazo has shifted between being diagnosed as terminal and being cancer-free. She explained her situation to Complex:

"I’ve been told, 'Hey, you are doing perfectly fine, your cancer is stable,' and the next thing you know I find a new tumor or there’s something wrong ... Then I’ve also been told, 'Hey, you’re terminal, there’s nothing else we can do for you,' and then it has completely switched around. March of this year, I was told that I was no longer terminal, which was a huge deal. But then again, two weeks ago I was told that I have a new tumor."

Also according to Complex, the Las Vegas, Nevada, native was interested in becoming a dance teacher before her diagnosis.

According to her CW profile, Lazo is out and proud. It remains to be seen if her romantic situation is going to play a big role in her My Last Days episode, although there's clearly love in her life.

4. Her Story Will Get You Thinking

In creating the series, Baldoni says he wants people to be inspired to live fuller lives. "One of the things I realized is that we push away the idea that one day we won't be here anymore," he told Us Weekly. "We procrastinate… we procrastinate to do literally everything. And that includes living the life we want to live and becoming the people we want." Lazo shows how not everyone has the luxury of procrastination.

5. She's Determined To Do Some Good

Lazo is raising money for St. Jude Children's Hospital. You can support her efforts on her GoFundMe page.

There's so much more to learn about Lazo, and we're sure to see even more of the incredible person that she is during her episode. But this is already enough to make it clear that she will be one to watch.