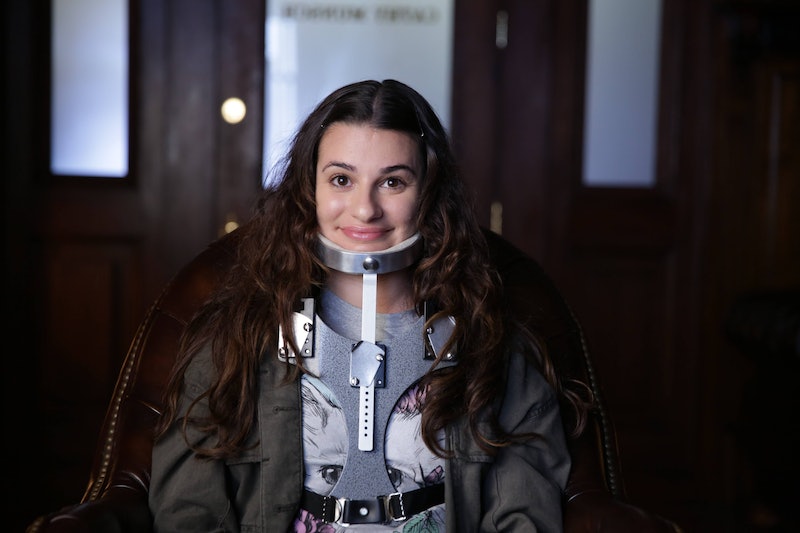 We all better go shopping for some fava beans and a nice chianti because Scream Queens Season 2 is going full Silence Of The Lambs. In advance of the horror dramedy's upcoming premiere, FOX has been releasing a series of promos that tease the show's new setting (a mental hospital), introduce us to new characters (played by John Stamos and Taylor Lautner), and show us our old favorites back in action (Dean Munsch now runs the hospital and the Chanels are her employees). The latest promo in the series, titled "Rise And Shine, Ladies," teases the most interesting development yet: Hannibal Hester.

As Chanel Oberlin is wheeled through the halls of the hospital by Zayday, she comes face to face with Munsch, whose back is turned while she places a mask on a hidden patient. (Chanels #3 and #5 are busy making out with Stamos and Lautner, respectively.) "If only you could see the look on your face," Munsch says as she turns around and reveals Season 1's killer, Hester Ulrich — aka the Red Devil — wearing a Hannibal Lecter-esque restraint. "Priceless." As Hester stares daggers at her, Chanel mutters, "Oh hell no." Oh hell yes, the rest of us are probably thinking.

While Season 1 of the series paid homage to Sorority Row and other college-set teen slasher movies, it looks like Season 2 is going to grow up slightly, owing more to the likes of the hospital-set sequel Halloween II (also starring Jamie Lee Curtis, ironically) and The Silence Of The Lambs. It's the latter reference that's the most intriguing — and could potentially tell us the most about what's to come in Scream Queen's sophomore year.

This promo makes it clear that Hester is our Hannibal Lecter; it's a metaphor that makes obvious sense, since she's a known serial killer who is apparently locked up in a mental hospital. (It will be interesting to see how she arrives in that position, though, since she was still free at the end of Season 1.) To continue the metaphor, the promo also makes it clear that the season will be positioning Chanel Oberlin as the Clarice Starling to Hester's Dr. Lecter.

Sadly, this analogy doesn't bode well for several characters if we follow it through to its logical conclusion. At some point, Hester will likely escape from the hospital. just as Hannibal does in The Silence Of The Lambs, killing two of his guards in the process. (Will Stamos' and Lautner's time on the show turn out to be shorter-lived than we thought?) And, once he does escape, Dr. Lecter ends up hunting — and eating — his old warden, Dr. Chilton. It's hard to imagine Scream Queens without Dean Munsch, so she better treat Hester better than Chilton treated Hannibal if she hopes to make it out of the season alive.

Of course, the most interesting prediction one can make based on this promo is the role that Hester will play in apprehending the Season 2 killer. We still have no idea who — or what — will be replacing the Red Devil as Scream Queen's main antagonist, but, whichever mask they wear, it's clear that Hester will be instrumental in bringing about their downfall, just like Hannibal helped take down Buffalo Bill. After all, it takes a psychopath to know a psychopath, right? As much as they despise each other, it's going to be fun to watch Hester and Chanel be forced to work together to unmask the new killer and survive the season.

Scream Queens Season 2 will debut in one month, on Tuesday, Sept. 20. As fun as these vague promos have been to dissect, hopefully we'll be getting some actual footage from the season soon to get us stoked for the premiere… and to give us a new masked murdered to fear.