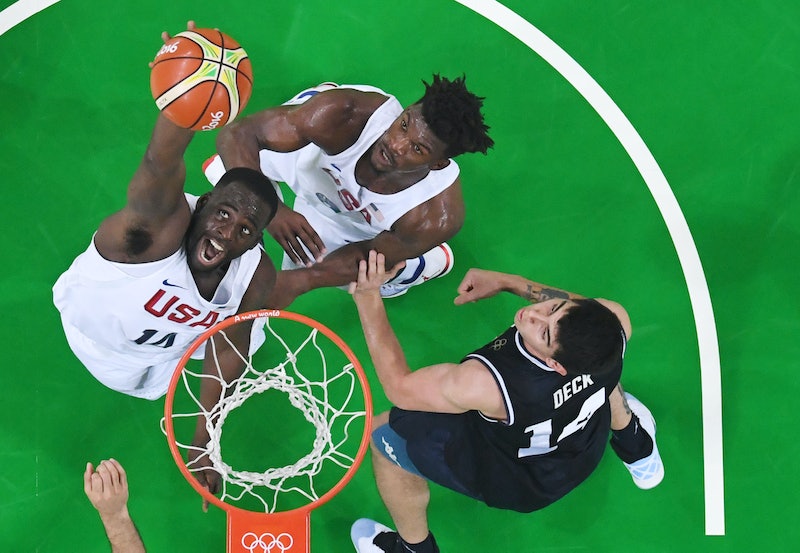 My own fascination with the Olympics extends beyond the actual competition itself and into the weird and wonderful reality of the world's best athletes sharing for a few weeks the same space, food, and, apparently, vat of condoms. The Olympic Village sounds like some kind of mythical town; like the Shire, only with 6'4" Michael Phelps mingling with the Hobbits. Or Hogsmeade if you ended up sitting next to Simone Manuel at the Hog's Head. But not every Olympic competitor chooses to stay in the accommodations provided by the host city and the International Olympic Committee. Some programs choose less traditional housing. According to The New York Times, Team USA basketball stays on a cruise ship in Rio, away from the Olympic Village. Why are both the men and women representing the USA bunking away from the other athletes? It's protocol, at this point.

The New York Times also reported that Team USA basketball began seeking "off-campus" housing in 1992. In 2008 and 2012, the team stayed in hotels. In Athens in 2004, the players had a similar situation to Rio and took over a cruise ship. "This is not something new," an unnamed Team USA rep allegedly told TMZ about the Rio housing plan. That person also claimed that other people besides the team are staying on the boat too, likely family members and support staff. The cruise ship sounds comfortable enough; it's called the Silver Cloud.

So why the seclusion? USA Basketball is trying to minimize the drain on its players' time and maximize their focus. “Our players are probably the most recognizable athletes in the world,” director Jerry Colangelo told The New York Times. Carmelo Anthony and Kevin Durant are stars, certainly. But Colangelo's is a myopic assertion, especially in this global context. Zac Efron flew to Rio to congratulate Simone Biles and the rest of The Final Five. Usain Bolt continues to dominate in Track & Field. Michael Phelps is the most decorated Olympian in history. All of those individuals, The New York Times points out, are staying or have stayed in the Village and have not reported any mob scenes.

The players don't seem to be complaining about their digs. Player Sue Bird told USA Today how the ship compares to the Village. “There’s more restaurants generally speaking," Bird said. "There’s more places to hang out. It’s really easy to live on that for these two weeks.” The paper also reported that the teams were deposited at the Silver Cloud by a motorcade.

I struggle to believe that Team USA basketball really wouldn't able to go about their business in the Olympic Village without being accosted. And player Tina Charles told The New York Times that being separated from the rest of the crowd can actually dilute the true Olympic experience. “You’re not able to interact with athletes, you’re not able to see them every day, build relationships, build friendships that way," Charles said. Not to mention that cruise state rooms are notoriously small. How are those power forwards faring in those tiny beds?

The safety of athletes is important, but Team USA Basketball's living arrangements don't appear to be in line with the community aspect of the Olympics. Maybe next time they'll get to join in on the, ahem, fun in the Olympic Village.