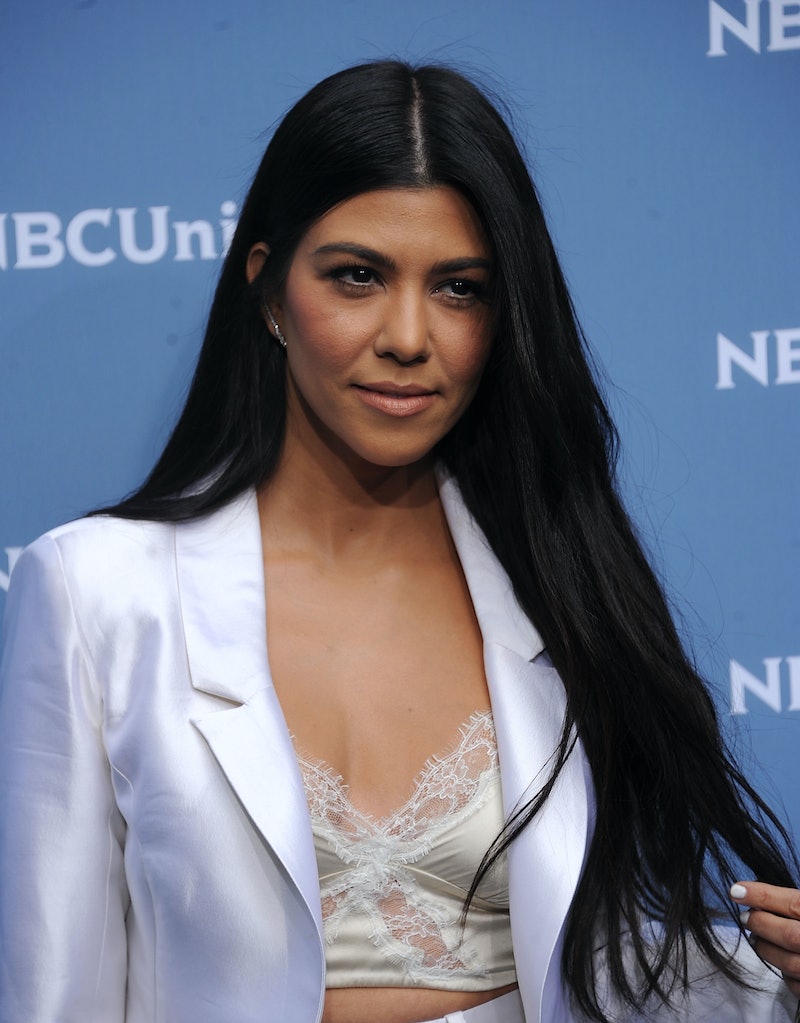 Although they've seemingly smoothed things over by now, that doesn't mean there wasn't any drama when Rob Kardashian first got engaged to Blac Chyna. In a clip from the upcoming episode of Keeping Up With The Kardashians, Kourtney Kardashian revealed her breaking point with her brother's fiancée. When you hear her reason, you may actually agree with her. Why? She was putting family first.

Allow me to explain — it all began when Chyna released her line of emoji (aptly named Chymoji), which included a gif of a dark-haired, big-lipped girl getting slapped. If you recall, the Internet speculated it was supposed to be Kylie Jenner. Regardless of whether that was actually Chyna's goal, Kardashian went on the defensive on behalf of her little sis. In the KUWTK commercial, she explained,

"This is the first time that made me question Chyna's intentions. Like I usually don't let any of this stuff bother me, but for some reason, this just sets me off."

Honestly, can you blame her? How would you feel if your brother's girlfriend made a cartoon of your sister (or someone who looked just like her) being slapped? I know, that's probably not a realistic scenario for anyone besides the Kardashian family, but it still sounds terrible. So, how did Kourt handle it? By calling her little brother. Spoiler alert: That didn't go over well.

In the sneak peek above, Kardashian shared her plan of action. She said,

"Everything with Rob, I always try to be super calm, but I was just in a mood. I was going to call Chyna, and then Kylie was like, 'No, just call Rob. Like it's too crazy to call Chyna.' And I'm like, I don't want to yell at a pregnant person."

On the one hand, I respect that Jenner told Kardashian to not make a big fuss over it, but unfortunately Rob wasn't the most openminded listener. He supposedly flipped out on his big sister and threatened to tell red carpet reporters that his family was unsupportive and disgusting. Yikes! He also claimed it couldn't be a depiction of Jenner because Chyna has never slapped her (which, in his defense, is true). It kind of sounds like a flimsy excuse though, and unlike Kardashian, he wasn't having his little sis' back.

Overall, this sounds like quite a bit of family drama. As for "questioning Chyna's intentions," that's something the public did when she was so quick to reportedly trademark her new name — Angela Kardashian. Everybody wondered, is this all a publicity stunt? Is it just fodder for their reality show? Luckily, most of those doubts have been squashed by now. Just watch the preview for their new show, Rob & Chyna , and try to tell me there's not some genuine love there.

As for Chyna and Kourt, I'm hoping they put this one past them. And as long as there aren't any more slapping Chymojis (of Kardashian family members or otherwise), it can just be water under the bridge.