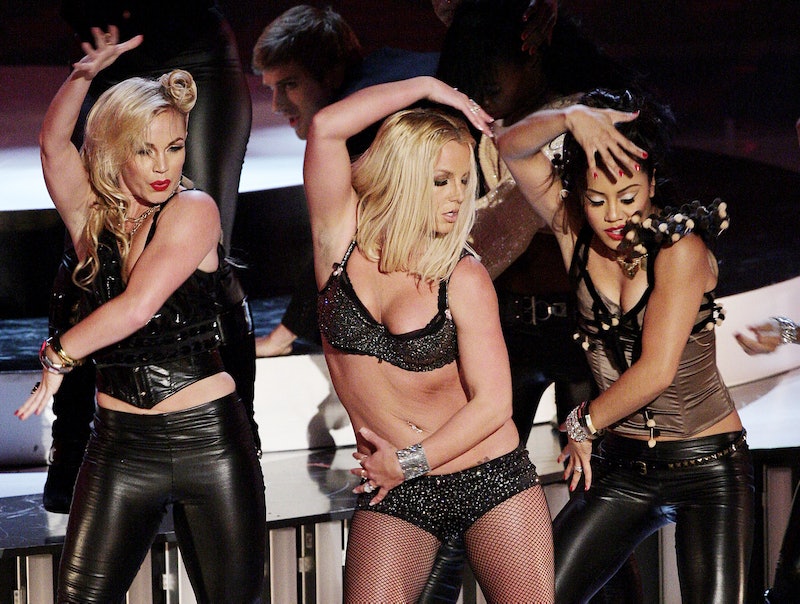 There's always a ton of hype when it comes to the MTV Video Music Awards, but one performance this year should have '90s kids in a huge frenzy: It's Britney, b*tch. Yes, Britney Spears is performing at the 2016 VMAs ahead of her new album, Glory, and though the pop princess is a VMA veteran, there's a hell of a lot riding on this. That's because it's the follow-up to Spears' 2007 VMAs performance, a rendition of "Gimme More" that baffled a nation. It's been nine years since that performance, and whether the criticism was warranted or not, her new performance will surely be compared, which could mean a big VMAs comeback is on the way.

In case you're trying to black it out, the year Spears performed "Gimme More" was an incredibly rough one for the pop star. The world watched in horror when she shaved her head and hit a paparazzi car with an umbrella. There was her split from Kevin Federline that closed out 2006 and, for a time, she lost her custody of her sons. In short, these were the Dark Days of Britney. At the time it felt like half of America was rooting for her downfall, while the other half hoped that her "Gimme More" performance would be a comeback. And, of course, those hopes were dashed upon the rocks.

Aside from the general lack of fanfare, you could really tell that Spears was burnt out from her personal struggles. There's the usual lip-syncing (which is whatever, lip syncing and Spears are sort of a package deal), but her movements were really what were concerning. She seemed sluggish, and the choreography itself was just wooden. If you catch her eyes at any point in this performance, you can see how just how disconnected she is from being on stage.

I think the biggest thing to keep in mind, however, is that the pain of this performance stung so hard because, prior to this, Spears' VMAs game was legendary. 2001 saw her draped with a yellow anaconda as she sang "Slave 4 U." And the VMAs performance that preceded "Gimme More"? Oh, it's just when she played tonsil hockey with Madonna in a wedding dress (Christina Aguilera did, too, I guess, but that smooch wasn't in the papers for weeks). "Gimme More" was so heart-wrenchingly disappointing because it was a shadow, a shell of those performances.

But look, we all got through 2007, the pop star included. After some serious TLC, Spears emerged at the tail end of 2008 victorious, releasing Circus and appearing stronger than ever with hits like "Womanizer." Then came the triumph of Femme Fatale, which — although it still falls short of the days off "Oops!...I Did It Again" and "...Baby One More Time" — has a myriad of exhilarating, fast-paced dance tracks. Try not to lose control if "I Wanna Go" or "Till The World Ends" starts playing in the club. And while Britney Jean is less of an outright triumph ("Work B*tch" works best tongue-in-cheek), 2013 saw Spears finding a home in Las Vegas with her residency show, Britney: A Piece of Me.

The celebration of classic Spears draws in impassioned fans from all around, but it's also a wise mood for her personal life. The residency gives Spears both steady work surrounded by her biggest supporters and a stable home life for herself and her two sons since she doesn't have to travel around as she would on tour.

It was deep darkness that really made "Gimme More" a bizarre moment in Spears history. Now, she's healthier, happier, and she's been honing her skills with her Las Vegas residency. You can feel free to watch her last performance, if only so you can compare it to what potential gloriousness could possibly occur when the 2016 VMAs air on Sunday, Aug. 28. Yes, 2007 was a bad year, but I have high hopes that 2016 will bring Spears back to her former VMAs glory.