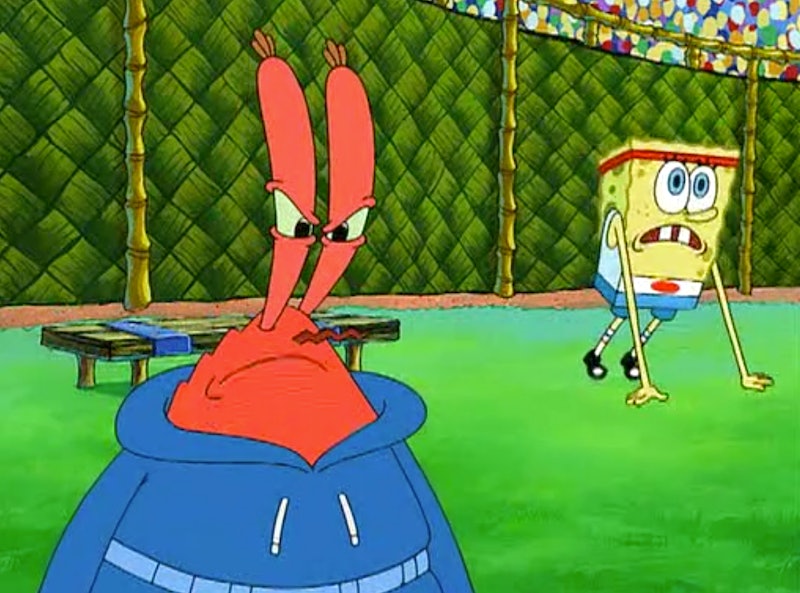 There is a lot to love about the 2016 Rio Olympics. Mostly this includes inspiring women named Simone, rugby player proposals that make our hearts swell with happiness, and Michael Phelps' game face. The 2016 Olympics are a global event, and definitely worth tuning in to, but it's not the only games we should be watching. A certain episode of Spongebob Squarepants also deserves a lot of attention, because it's the one which Spongebob dominates every pseudo-athletic event. I am, of course, talking about the ultimate fry cook competition, seen in the very special Spongebob Squarepants episode "The Fry Cook Games."

As Nick fans know, Spongebob Squarepants is a seriously talented fry cook at the Krabby Patty, a restaurant that appropriately serves hamburgers called Krabby Patties. Spongebob is good at his job. His friend, Patrick, who occasionally shows up to the Krabby Patty and sometimes is tasked with subbing in when Spongebob is out having other adventures, is not so good at the whole "work" thing. (I mean, this is a guy who lives under a rock, right?) Spongebob and Patrick are BFFs, so it makes the whole thing a little complicated when they end up competing in the games against one another. Patrick goes to bat for Plankton's The Chumbucket, while Spongebob represents The Krusty Krab in the competition. Of course, the competition breeds resentment, and soon the pair is at one another's throats in a way that the Olympic games would definitely not approve of.

So what actually goes down during the Fry Cook Games? It's not all that different from the actual Olympics. First, there's still a torch:

There's a great rivalry between people who spend a lot of time in the water, just like swimmers Michael Phelps and Ryan Lochte.

There's diving! And a moment in time where Spongebob Squarepants' name doesn't actually suit him.

Spongebob did it first.

There are emotional moments:

And moments of friendship and victory:

At the end of the "Fry Cook Games" episode, Spongebob and Patrick put aside their differences and decide that their friendship is far more important than any fry cook title — which they realize when they see that they are both wearing each other's colors on their underpants. (It's sort of like why Batman and Superman decide to stop fighting each other in Dawn Of Justice.)

The Olympics may be a very big deal, but in the world of Bikini Bottom, it's the Fry Cook Games that really bring people together. Check out the full episode here.