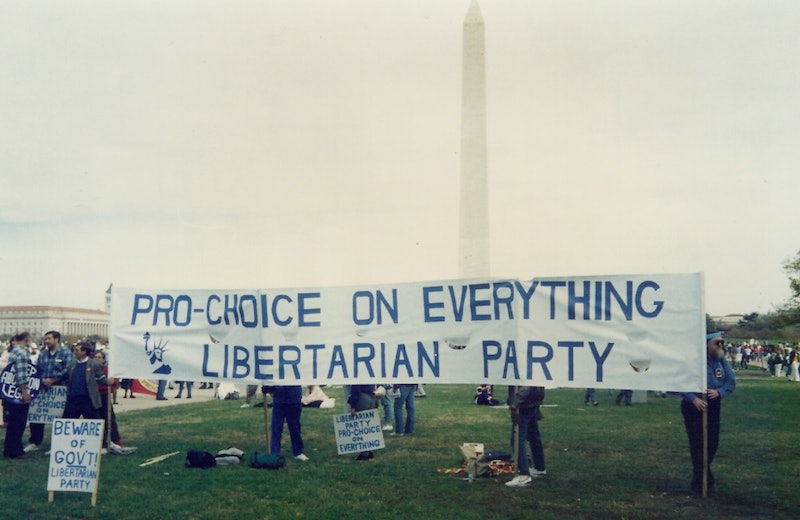 When I was eighteen, I made the amusing mistake of interning for the Republican Party of Virginia. I’d always been interested in free markets and economics, but I miscalculated our compatibility; turns out, the Republican Party did not feel like the best place for a sex-positive social justice feminist with an off-color sense of humor. After the fifth phone call from a conspiracy theorist claiming President Obama was born in Kenya, I couldn’t keep it together. It felt to me like the party's messaging was too focused on wealthy white people, at the expense of understanding minority communities and what it feels like to work your way up through our economic system. Needless to say, I left after a few weeks and soon fell in love with libertarianism — which I would define as the concept that you shouldn’t tell other people what to do or take their stuff.

I soon found there are many different components of libertarianism, ranging from believing in free markets and unfettered capitalism to lessening government regulation and ending the war on drugs. Although I’ve always found some elements extreme (like, can we not try to abolish the Department of Education?), the basic concept appealed to me: people should be free to do what they want as long as it doesn’t harm anyone else. Ending the drug war, reducing welfare, and scaling back foreign wars are issues that matter hugely to me as a libertarian and it’s often frustrating to me that my tax money goes towards the DEA, national defense, and what I feel are inefficient welfare programs. Since I’m more of a moderate, I often try to mitigate some of the more extreme libertarian issues, like the idea of reducing welfare, by supporting private charities like Street Sense in D.C., an entrepreneurial organization that helps the homeless and formerly-homeless.

This is the first presidential election I’m eligible to vote in, and I’m thrilled to be able to cast a vote for someone who shares my same political values. Right now, to me, is an exciting time to be a libertarian. Our presidential candidate (and a friend of mine), Gary Johnson, is being included in debate prep plans; if he reaches the 15 percent polling threshold over the next few weeks, he’ll be included in the presidential debates, the first time a third candidate has been included since Ross Perot in 1992.

I respect your right to choose whomever you think is best, just as I hope you’ll respect my right to do the same.

Polling at around 9 percent nationally, with numbers as high as 15 percent in key states like Colorado, it’s awesome to see such a unique candidate gaining popularity, traction, and unprecedented media coverage. With large swaths of American voters now identifying as independent or undecided, it’s clear that either more parties need to be included or the current parties need to be restructured.

Trust me, I’m a recovering Republican who couldn’t stand the messaging of the party. I know that it can be awfully hard to find a political home.

There’s a lot of tension between the far left and the right, these days, as I think many conservatives associate social justice activism with calls for trigger warnings and microaggression policing, two well-intentioned concepts they see as harmful for free speech. This is why I’m glad Gary Johnson has spoken out in favor of Black Lives Matter, and it’s part of what makes me excited to vote for him.

Johnson recently came out in favor of the Black Lives Matter movement, which completely won me over. Commenting that his head “has been in the sand...that this discrimination does exist and has existed…” for far too long really spoke to me. We have a presidential candidate that’s being awoken to the tremendous differences between the black experience in America and the white one. This is a guy who’s willing to get on national television to admit his own prior ignorance and how his privilege has shielded him from police brutality for a long time. I believe it’s time for a serious, no-nonsense, brutally honest national conversation about privilege and injustice — and Johnson is willing to do that. That's why, for me, voting for Johnson is a way to take action.

Johnson is also a truly pro-choice candidate, who believes that the individual should exercise the most power over their own bodies and lives, provided they don’t harm anyone else. He believes in reining in abuse of power and limiting government to ensure maximum personal freedom. And which other party can say they’ve been putting support for gay marriage in their platforms since 1972, instead of flip-flopping on it as public opinion warmed up? At the end of the day, I believe that libertarian principles are all about ensuring you live your life as you wish, without some random politician (read: old, white male politician) telling you what to do and threatening punishment if you don’t comply.

One of the biggest criticisms I get about being libertarian is that it’s impossible to get anyone elected, and that voting third party is throwing your vote away. I believe that your vote is yours and nobody else’s, so others shouldn’t pressure you into voting a certain way or say that you’re responsible for the country’s destruction if you vote for the "wrong" candidate. The beauty of our electoral system, in all its flaws, is that there is one vote per person and that voting is done in secret, free of coercion.

In fact, simply introducing more ideas — whether they be the ideas of Gary Johnson, Bernie Sanders, or Jill Stein — into our political discourse is valuable, because they’re comfortable with advocating for more extreme, revolutionary ideas instead of the usual meaningless political soundbites. At the end of the day, it’s your choice, your values, and your conscience — and as a libertarian, I respect your right to choose whomever you think is best, just as I hope you’ll respect my right to do the same.

Libertarianism isn’t perfect, by any means. We often do a mediocre job communicating our values in a compassionate way or focus too much on drug legalization (an important issue, but perhaps a little too stoner-y to be taken seriously) at our own expense.

But I feel best voting for a candidate who respects my individual autonomy, rather than candidates that I feel are power-hungry and untrusthworthy. Libertarianism respects me and my ability to make my own choices, while attempting to break down the systems of power that have led to police brutality and mass incarceration. I’m happy to have finally found my party and my candidate, even if it took a few awkward Republican birther-conspiracy conversations to get here.