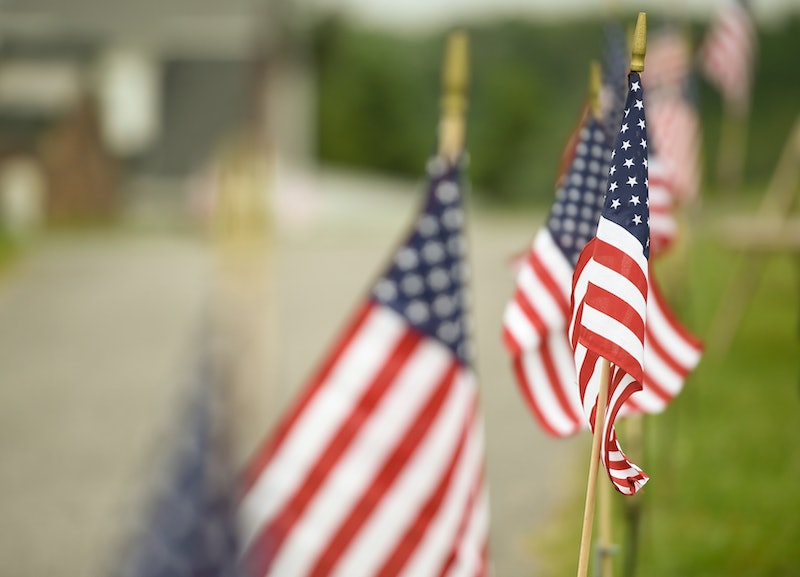 For those of us who work in an office, having Labor Day fall on a Monday is a pretty incredible September win — it's a nice little one-day break that makes us feel a little bit less overwhelmed about the fact that our summer vacations are pretty much over. But why is Labor Day on a Monday? And, was it always on a Monday? (Or was that the work of a few people who, in a typical fashion, wanted an excuse to have a three-day weekend?)

Oddly enough, the very first Labor Day was actually celebrated on a Tuesday — Tuesday, Sept. 5, 1882 to be exact. The Central Labor Union went ahead and made Sept. 5 the official day for the second year celebration, as well. It wasn't until 1884 that the holiday was moved to a Monday. As the day was created to help celebrate the working man, it made a bit more sense. Here's a fun fact: The first celebrated Labor Day included a rally, and it was expected to have low attendance due to the fact that men would be sacrificing a day of pay in order to take part. Alas, they were wrong.

While you probably imagine that any activity which promotes the celebration of a laborer would be peaceful (and, possibly even fun), the opposite would be true in this case. In fact, there was a lot of problems surrounding Labor Day based on another holiday with a similar mission — International Worker’s Day, also referred to as May Day, which is observed on May 1.

After a bomb exploded during a labor demonstration that same month, people became a little fearful of how "radical" the average American laborer was getting. This incident, which took eight lives, was later referred to as the Haymarket Affair, due to the fact that the demonstration took place in Haymarket Square in Chicago. So, you'd imagine that having another holiday that celebrated the common-day worker might bring out some fear. This is part of the reason why President Grover Cleveland decided to make Labor Day official — after all, there wasn't a disastrous incident that tainted the month of September. The two holidays might be similar, but do have one distinction from each other — International Worker's Day focuses more on getting higher pay for lesser hours, and Labor Day is all about honoring the concept of work, and the feeling of pride we often get from work.

All of that explains why Labor Day is celebrated in September, but it doesn't explain why, to this day, it's celebrated on a Monday. The first reason is because back in 1894, after 10 years of Monday observation, Congress established that first September Monday to be the official Labor Day holiday. The second (and quite possibly the reason that secures Labor Day's Monday status) is the Uniform Monday Holiday Act, which was signed by Lyndon B. Johnson in 1968. Back then, the holidays under that act included Washington's birthday, Memorial Day, and Veterans Day — and by changing these holidays to be set on Monday, it allowed workers to have a much-deserved three-day weekend to celebrate with their families. The act also included Columbus Day as an official federal holiday. All in all, it was a solid act.

Of course, change was inevitable — for example, Washington's birthday was combined to celebrate presidents in general, forming Presidents Day. As the original act states, "the provisions of this bill insure a minimum of five regularly recurring three-day weekends each year for Federal employees," so it made sense to include Labor Day, which was already set to be a Monday celebration. This bill officially went into action back in 1971, and obviously most workers are still quite happy with it.

So, make sure that you celebrate Labor Day hard this year — after all, this day originated solely to let you appreciate the work you do, and take some time to yourself.

More like this
The 8 Best Chew Bones For Puppies, According To A Vet
By Andrea Hannah
The “Teenage Dirtbag” Trend Is TikTok's Latest Nostalgic Obsession
By Meguire Hennes
How To Use The Whatnot App To Thrift Vintage Items
By Emma Carey
Your Daily Horoscope For August 17, 2022
By Alexandria Lettman
Get Even More From Bustle — Sign Up For The Newsletter