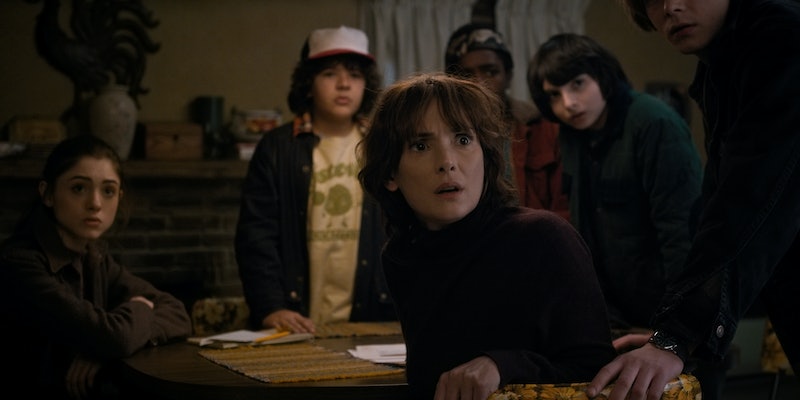 Stranger Things is the greatest underdog tale of the Netflix-era of television. A quick, eight-episode season sprouted up one weekend with little publicity and only one recognizable name (Winona Ryder, in her first major role in far too long). Then, by the next week, it seemed to have taken over the entire world. Rivaling shows like Game of Thrones and The Walking Dead in terms of popularity and social media activity, Stranger Things proved that an '80s throwback horror-adventure series that kills off its best character three episodes in can succeed. However the scariest thing about Stranger Things is the uncertainty of a Season 2. Luckily, there's one quote from a Netflix executive that can ease fans fears, as it indicates that a Stranger Things Season 2 renewal is very likely.

While speaking to The Guardian, Chief Executive Reed Hastings failed to give any absolute answers on the topic, but assured everyone that when it came to renewal, Netflix "would be dumb not to." Netflix is known for having faith in their new series with every Netflix original being renewed for a second season, even if they're not nearly as successful as Stranger Things has become in such a short span of time. It's good that Netflix is aware of what a great show they have on their hands, and here are just a few examples of why Netflix would be "dumb not to" renew Stranger Things for another season.

Stranger Things Could Be A Launching Pad For Some Huge Careers

While many shows like Game of Thrones and Sherlock are prestigious in their own right, they're also known for their large casts of actors who have grown beyond the limits of a television hit and become massive stars on their own. While it's too soon to tell which Stranger Things cast members will get a massive career boost the way actors on other highly acclaimed shows have, Netflix would be smart to cultivate a positive relationship with these talents before they get too popular (and too expensive) for the show.

Most television shows have one "thing." They'll diverge occasionally, but when one tunes into The Walking Dead they can always expect it to be a zombie-fueled action drama. When one tunes into NCIS, they know to expect a crime procedural. All episodes of Stranger Things follow the same story, but all the different individual plots could be different styles and genres. One minute you're watching a conspiracy thriller, the other you're watching a nostalgic action-adventure, a minute later you're watching a teenager-centered slasher/monster movie, and next thing you know you're watching a psychological horror film depending on which character the show is focusing on at any given time. It has something for everyone, and it's a lot cheaper for Netflix to have one show that covers so much ground than four shows that stay in their lane.

Stranger Things Is All Anyone Is Talking About

After their runs on television were cancelled, shows like Firefly, Freaks & Geeks, and Arrested Development became cult sensations after people realized that these shows were actually amazing. Stranger Things feels like it should be a cult show that no one knows about, and yet it's one of the most popular new shows of 2016. If Stranger Things had come out half a decade ago, chances are it would have been cancelled and people would be petitioning Netflix to revive it. Not renewing Stranger Things would be giving up on the rare cult show that manages to gain immense popularity before it gets cancelled.

Netflix took a massive risk by giving two little-known writer/directors the budget and creative freedom necessary to construct something as detailed, complex, and niche as Stranger Things. It's not often that a risk like that pays off to such massive returns in television, and Netflix is in a powerful position right now. More than anything else, it's clear that a lot of people like Stranger Things — and the people who love Stranger Things really really love Stranger Things. Reed Hastings hit the nail right on the head when he stated that Netflix "would be dumb not to" give it another run.