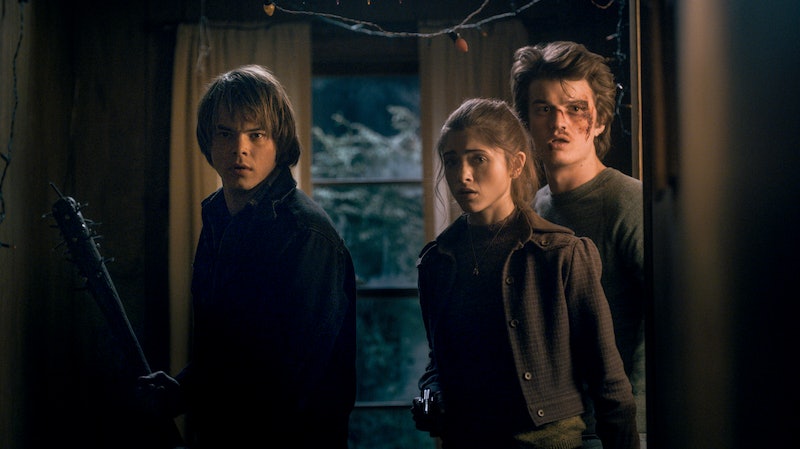 Netflix has not officially renewed this summer's breakaway hit Stranger Things for a second season but, not to jinx anything, it seems pretty much like an inevitability at this point. Both fans of the show and those who work on the show have already started discussing what could possibly come creeping up next. In a conference call with reporters and director Shawn Levy, co-creators Matt and Ross Duffer talked about some of the plans for a potential Stranger Things Season 2.

Stranger Things may have literally opened up a huge world with a lot of apparent mythology, but Season 1 was focused on rescuing Will Byers. Drawing comparisons to Poltergeist, another family story in which the characters don't understand everything that's going on, Duffer says, "the last thing we wanted to do in the world was cut to a scene in the laboratory and you have a bunch of scientists sitting around explaining it. At the end of the day, what's important is that Will is in this other, terrible place." They wanted to intrigue, not frustrate — which is great, because it leaves a lot of space for stories in Season 2!

So, those who love Dustin and Chief Hopper, want to learn more about Eleven, and are still hanging on to hope that Barb could reappear — don't worry! This isn't going to be an anthology series like American Horror Story, Fargo, or True Detective. Season 2 won't be about an alien invasion in Oregon, or anything. We're sticking with Hawkins, Indiana for a while.

"We love these characters and want to continue with them for a little bit," continues Duffer. "But unlike a traditional TV show, what we really wanna do is treat the second season as if it were a sequel. You know, a movie sequel, in that we do have a new tension, It's still tied into the original tension of season one but there's a new main tension that needs to be resolved as well, and that idea to us is exciting."

Sounds like the flower-monster demogorgon may not be the only thing lurking in the Upside Down... or at Hawkins Laboratory. I've never really made the distinction between a movie's sequel and a new season of television before. However, since the production values are so cinematic and the Netflix experience feels more like watching a really long movie, it makes sense in a few ways.

In fact, since Stranger Things is so reference-heavy, I wonder if we should start looking at famous sequels for theories about what's to come. The Star Wars, Star Trek, Indiana Jones, Jaws, and Back To The Future franchises all come to mind. The '80s had a different approach to sequels than we do now, so this could be really interesting. Honestly, whatever Stranger Things is cooking up for Season 2, you can count me in.