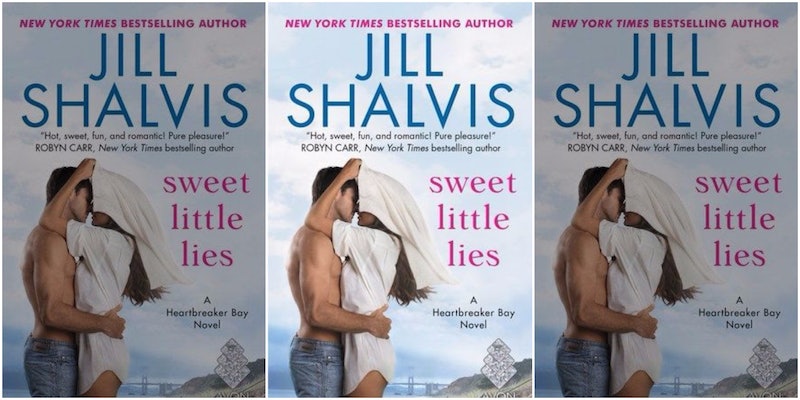 If you've ever browsed the Romance section at your local bookstore, you've probably seen countless Jill Shalvis' books. She's a New York Times best-selling author, and there's a reason for her popularity: her writing is character-driven, accessible, and just the right kind of sultry. Some of her most talked-about series include the Animal Magnetism and Lucky Harbor books, but this year, Shalvis released the first title – called Sweet Little Lies – in a new series, the Heartbreaker Bay cycle. The books in this series are set in San Francisco and tell the stories of apartment tenants who live next door to a wish-granting fountain. I had the opportunity to talk to Shalvis after reading Sweet Little Lies and The Trouble with Mistletoe , which comes out this September — so if you're a Shalvis fan (and why wouldn't you be?), read on!

The main character of Sweet Little Lies is a kick-butt boat captain named Pru Harris, who's just moved in to the complex. Pru quickly develops a crush on Finn O'Riley, who, along with his brother, runs the Irish pub on the apartment complex's ground floor. Finn's interested in Pru, too, but there's something Pru knows that he doesn't: Pru's parents and Finn's father died in the same car accident, connecting them in ways that fill Pru with guilt. To try to ease her conscience, Pru throws a coin into the fountain outside the complex and wishes that Finn will find true love. Pru, of course, doesn't know that the fountain is magic. She just knows that it's a local legend... but it ends up bringing romance to more than just Finn.

"I was once in a place where I wished such a magical fountain really existed, and that stuck with me," Shalvis tells Bustle. "When I was outlining this new Heartbreaker Bay series and setting in San Francisco – one of my favorite cities – I knew it was finally the right time to use it."

Pru also befriends the complex's version of the Pink Ladies: Elle, an intimidating businesswoman; Haley, an intern at the nearby optometrist's shop; and Willa, a warm-hearted pet store owner. Sweet Little Lies highlights the importance of friendship just as much as it does the zing of a sexy flirtation. As I was reading, I found myself wanting to know more about Pru's new squad – and The Trouble with Mistletoe satisfied my curiosity.

In this book, Willa gets the main character treatment. Willa came out of the foster system, and she's put together the life she always wanted out of practically nothing. She gets to hang out with dogs and cats all day long, and her store provides jobs for people who might otherwise have nowhere else to go – her assistants are also young women who were once in foster care. But when Keane strolls into her store and asks her to board the cat his aunt foisted on him, Willa has to deal with all kinds of emotions. Keane stood her up at a high school dance (something he doesn't remember doing), but she's still into him. Like Sweet Little Lies, this book features a coin tossed into the fountain, a romance that makes you want to keep turning the pages, and plenty of animal love. (Pru has a dog, Thor, who features prominently in Sweet Little Lies.) When asked if she's an animal-lover herself, Shalvis says, "Yep, I’m a definite animal lover. Right this minute, I have a cat on my lap fighting for space with the laptop, and a dog on each foot. There is almost always an animal in my books of one kind or another."

Shalvis has already written the third Heartbreaker Bay book, which will feature Elle, as well as Archer, Finn's friend and another denizen of the apartment complex. But I was intrigued by pretty much every character in the series and wanted to know if we'd eventually get a book for each one. "I’m pretty sure Spence is coming along next," Shalvis says, referring to another member of the gang of friends that hangs out at Finn's pub. "After that, I’m open but I do plan to stick around Heartbreaker Bay for as long as readers have me."

I even had questions about Eddie, the homeless guy who hangs around the fountain. While reading, I got the sense that he is more than he seems "Am I on to something here?" I ask.

"Yes," she says. Readers are welcome to speculate on what that means...

However, as great as Spence is, he's not her favorite character to write. "It’s almost always the hero whose book I just finished, [but] I have to say specifically Archer from the upcoming Accidentally On Purpose, who is tough and stubborn and badass, and thinks he’s impenetrable," she says. "He gave me hell. Love him madly but I’m super glad I’m done."

Since Shalvis writes fast (Sweet Little Lies came out in June, The Trouble with Mistletoe is coming out in September, and Accidentally on Purpose will hit shelves in January of next year), I wanted to know more about her writing process. She writes every day when she's working on a book – something that I find admirable, since it's so easy to let the hours get away from you. "I’m happier writing earlier than later, but it depends on the book because sometimes the characters aren’t following my wishes or I write myself into a corner and have to dig my way out," she says. "Once in awhile, I can finish my goal for the day by noon but sometimes – more often than not – I’m stuck writing until later in the night."

Shalvis has published over fifty novels, which makes her a pro at penning book after book. What's more, she consistently manages to connect her characters with her readers. That's probably because Shalvis has a knack for spinning engaging stories from everyday details. "I was a journalism major who kept getting in trouble for elaborating on the truth," she says when I asked how she had gotten started writing romance. "My teacher begged me to switch from nonfiction to fiction, where I could make up things to my heart’s content. Romance was a natural fit, as it was my favorite genre to read."

And not only does she dismiss the idea that romance books are 'just escapism,' she thinks they can serve as much more. Romances can be complex novels that form entire worlds for the reader to step into, just like any other genre. "You get humor, warm fuzzies, action, suspense, love, angst, sexy times and … a guaranteed happily ever after [from a romance book]. Honestly, I can’t think of anything better than that," she says. As both a writer and a reader, her favorite romance books are the ones that are character-driven. "That’s what resonates with me: deep, flawed, moving characters."

Which was a welcome statement, since my college professors dismissed romance as a money-making side project at best and a threat to society at worst. Creative writing teachers discouraged "genre writing," which included sci-fi, Westerns, and, of course, romance. In one memorable lecture, an anthropology professor expounded upon the idea that romance novels gave women a false sense of expectation and encouraged them to stay in abusive relationships in hopes of a happy ending that would never come. As I read Sweet Little Lies and The Trouble with Mistletoe, I kept thinking of those professor's words. If anything, Pru and Willa's blossoming romances with men who ultimately respect both their bodies and minds reaffirm my desire to be with a partner who values my independence and achievements, but also understands and encourages my sexuality. Reading the books gave me a better idea of what I wanted, not what I should settle for.

I asked Shalvis what she would say to those kinds of critics. "Have those critics read romance lately?" she asks. "We’re writing modern women with modern problems in the modern day world. There’s diversity and so many different genres now that you can find anything to suit your tastes, “gender norms” or not."

If you're looking for an entertaining, yet engaging read for that last summer day on the beach, consider picking up Sweet Little Lies so you can get read for the release of The Trouble with Mistletoe on Sept. 27.

Beginning on August 1, Bustle will host Romance Novel Month, a month-long celebration and examination of the romance novel genre. But don't worry, romance readers: the coverage won't end in August. We're proud to support romance novels, and we will continue to do so all year long.