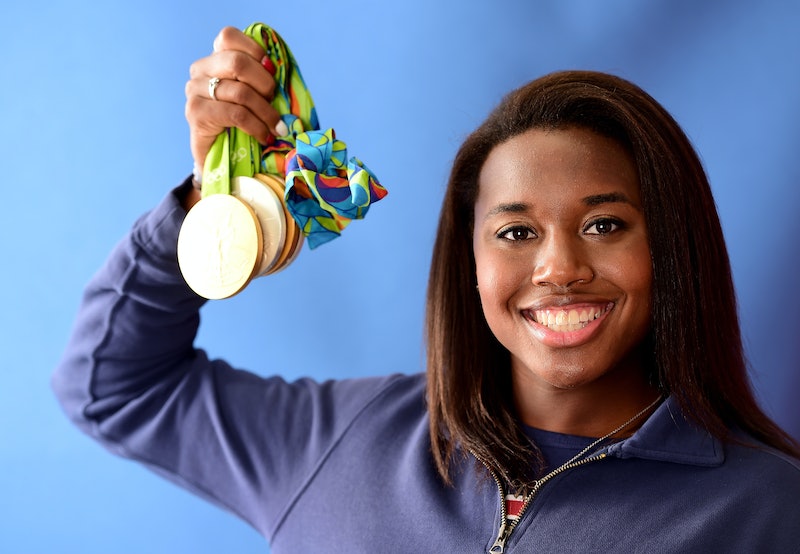 As the world watches the emotional closing ceremony of the 2016 Rio Olympics, everyone wants to know if their favorite stars are in attendance. Fans of Team USA swimming and those who've been following on social media might wonder: is Simone Manuel at the closing ceremony?

Unfortunately, it appears that the history-making Texan swimmer had to leave Rio a few days prior to the Closing Ceremony. She was first pictured in a tweeted photo by teammate and fellow gold medal-winner Leah Smith on Aug. 16 with other members of Team USA as they prepared to board a plane leaving Rio. The photo's caption reads "On our way back to the states!! we had a RIOlly good time (pun cred to @MayaDiRado)," showing that the team left four days prior to the Closing Ceremony.

On Aug. 17, Manuel tweeted that she'd arrived back home in Texas and later she already misses her teammates, which suggests that she's back home for good.

Indeed, Manuel's teammate Katie Ledecky posted on Instagram and Twitter that she was watching the closing ceremony from home (while wearing the Team USA chic uniform of a blue polo blazer and a striped shirt), and though Manuel hasn't yet made any statements about where she's watching the ceremony from, she posted a photo on Instagram from today that puts her in Sugar Land, Texas (her hometown), it's clear that she isn't in Rio.

Fans can only speculate why some stars don't attend the Closing Ceremony. It's probably not their decision, but rather that of their coaches. Even though Manuel won't walk with Team USA at the Closing Ceremony, she and the rest of the athletes that wowed us at the Rio Olympics are certainly there in spirit.