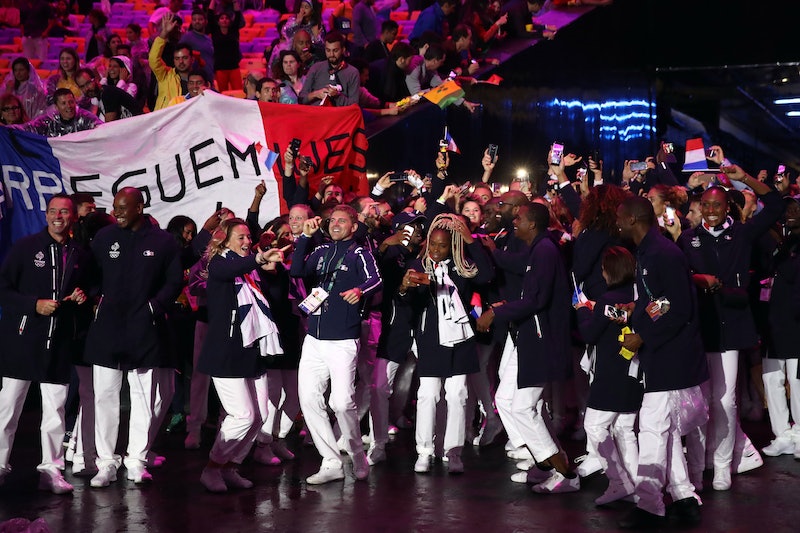 The world watched some incredible competitions over the course of the 2016 Olympic events. There have been so many high moments for the athletes who went to Rio to compete, as well as a few low moments. However, the thousands of athletes who showed up to represent the 207 nations that competed in this year's Olympics made some historic steps forward in their respective sports, setting the bar so high for the next Summer Games. One thing some of them aren't great at, though? Dancing. Yeah, there was bad dancing everywhere at the closing ceremony.

With all the excitement of the last week's events coming to an end during the ceremony on Sunday, it only made sense that these athletes would be dancing while meeting with and celebrating one another for the last time. Even though it was cold and rainy in Rio during the final night's celebration, these athletes were ready to go with their dancing and unity in the Maracaña Stadium — back where it all started. The French team really went hard with their team spirit as they joined together with their arms around each other and danced together in front of the camera.

But this guy definitely stole the show with his killer moves ... He's definitely "partying hard," as the message would have you believe.

And then there's this guy from Tonga, who some believe might actually be the official winner of the 2016 Olympics.

And these dancers — though not athletes — were definitely super important to the night's entertainment. I mean, the best part is that I couldn't immediately tell whether they were dressed as trees or broccoli. I'm still not sure, though some claimed it was Rio reminding us to "eat our vegetables." They're perfect either way.

Of course, all this dancing took us back to London in 2012 when another person stole the show with his killer moves.

Ah, yes, remember Brexit? Here is one of the "leave" party's engineers, Boris Johnson dancing the night away at London's 2012 Games. A true throwback. (Looks like he was plotting the "leave" campaign early on!)

But in all seriousness (kind of) this closing ceremony looks like the end-of-summer party we all want to be at, even with all the bad dancing going on.

More like this
The Nike & Jacquemus Collab May Have Been Inspired By Princess Diana
By Frances Stewart
7 Expert Tips For First-Time Pickleball Players
By Carolyn Steber
The 10 Best Longline Sports Bras, According To Reviewers
By Danielle Calma
Prince William Reveals Charlotte's Hidden Talent In Ultimate Proud Dad Moment
By El Hunt
Get Even More From Bustle — Sign Up For The Newsletter