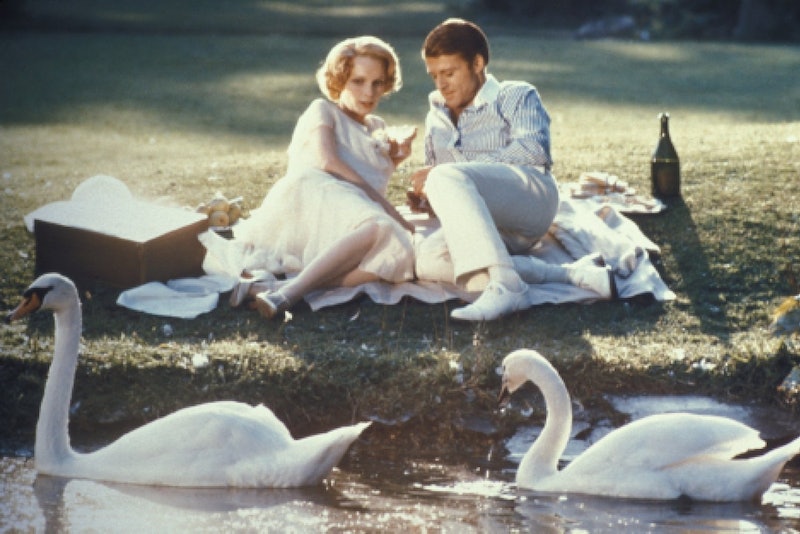 What do you call your significant other? "Baby" has probably slipped out of your mouth every once in a while, even if you claim to hate the word. And "bae" is a mid-aughts standard. But what terms of endearment did your parents use in the early days of their romance? And what about your grandparents and great-grandparents — how did they show their affection for one another during their courtships? Let's explore how couple nicknames have evolved over the last 100 years.

The 1900s came after the Victorian era, and the social norms of the time meant that romantic language often referenced marriage — as that was the only appropriate way to publicly discuss romance. The 1920s became slightly more risque with help from flappers, aka the bad bitches of the era. By the 1940s, pop culture played a significant role in popularizing lovey-dovey terminology, and pop culture's influence only increased each decade. In the post-World War II '50s, teen dating culture started to influence the popular slang of the day. Hippies of the 1960s and 1970s, extremely famous for their ~groovy~ way of speaking, developed their own terms of endearment. And in the contemporary era, we have the internet spreading slang around faster than ever before.

Your "beloved" was your sweetheart, your one true love, your husband or wife. The term frequently appeared in the love letters between legendary poets and spouses Elizabeth Barrett Browning and Robert Browning.

It was common to refer to the person you were soon to wed as your "intended" — meaning the person you intended to marry. In general, due to the sexual norms and decorum of the era, it was more common for romantic terms of endearment to center around marriage ("beloved" included).

While "baby" first emerged as a common slang term in the 1920s, it is obviously an ever present term of endearment in relationships. As Dr. Wendy Walsh, relationship expert, told Bustle, "[Relationships are] the most intimate place, where we are comfortably allowed to be the sweet baby that's inside of all of us. ... That's one of the reasons couples call each other ‘baby,’ by the way.”

The 1920s was The Jazz Age, an era marked by flappers, illegal booze, and speakeasies. And a "moll" was someone's girlfriend — especially a gangster's girlfriend.

Are you familiar with The Glass Menagerie, the play about a dysfunctional Southern family written by Tennessee Williams? If you have read or seen the play, then you are certainly familiar with its usage of the phrase "gentleman caller," referring to Laura Wingfield's potential suitor. A gentleman caller is a man who comes over to a woman's home with the intent of getting to know her better for dating purposes. Basically, a dude who is interested in you comes over to get to know you so he can ask you on a date.

"Going steady" is 1950s slang for ~being exclusive~. Your "steady" is the person you are exclusively dating, and you were probably asked to be someone's steady over fries and a milkshake at your local diner. Watch this famous musical number from Bye Bye Birdie , set in the 1950s, when the protagonist Kim and her new boyfriend, Hugo, decide to go steady.

Married hippies in the 1960s and 1970s often referred to their spouses as their "old lady" or "old man" — though unwed couples sometimes employed the phrase too.

Some linguists believe that the term "boo" originated as a mispronunciation of the word "beau," French for a male romantic partner. Regardless of its origin, "boo" is a massive part of our current lexicon. From its appearance in the early aughts Alicia Keys and Usher track, "My Boo," to a coy moment between Anderson Cooper and Democratic strategist Donna Brazile, "boo" is everywhere, and it owes its popularity to hip-hop and R&B.

You have definitely used the term "bae" in your life, either to describe a significant other, an unrequited love, an attractive person, a celebrity crush, or even your favorite food (à la "pizza is bae.") Bae is considered a shortened version of "babe" or "baby," or an acronym of "Before Anyone Else." Some argue that "bae" met its untimely death as soon as corporate-owned Twitter accounts started hopping on the bandwagon in their social media advertising, but it is still a popular term of endearment.