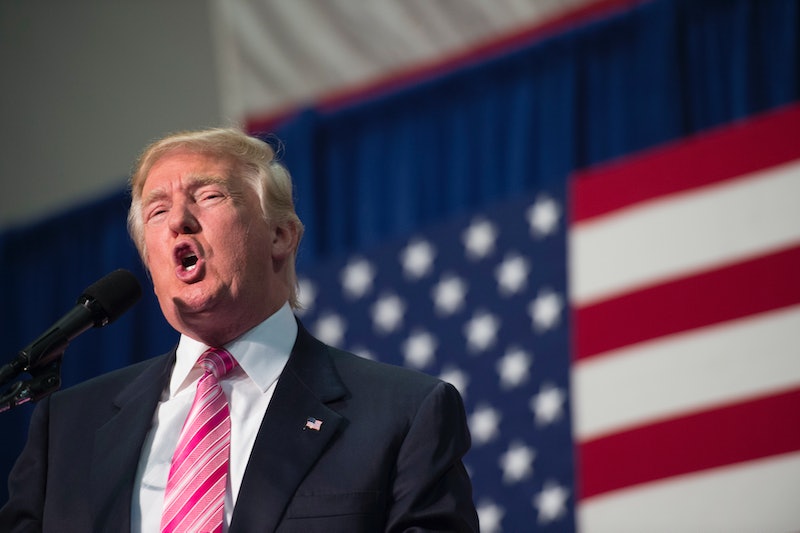 Most world leaders responded to the Olympics in a characteristically diplomatic fashion: Japanese Prime Minister Shinzo Abe made an appearance in Rio; President Obama Tweeted out his congratulations to Simone Biles and the rest of the U.S. Olympic delegation. Meanwhile, Donald Trump spent the closing ceremony posting insults on Twitter.

Trump, who hopes to be the 45th president of the United States, showed off his skill on Sunday night: spitting vitriol into the void. The presidential candidate made it clear that he wasn't watching the Olympics — which is fine. After all, it's been a long two weeks. He suggested he definitely wasn't cheering on the athletes who brought home the gold either. Instead, he was rehashing his favorite topic: the media's supposed bias against Trump and their support of Hillary Clinton, whom he lovingly refers to as "Crooked Hillary."

"I have been drawing very big and enthusiastic crowds, but the media refuses to show or discuss them," Trump wrote at precisely 8:35 p.m. ET, shortly after the closing ceremony began. "Something very big is happening!"

Something big was happening, indeed: the 2016 Rio Olympics were wrapping up. Thousands of people were tuning in to watch the closing ceremony, with its strange vegetable dances and impressive Super Mario homage.

But Trump didn't stop there — he immediately began tweeting about Clinton's "false and misleading ads," as he called them, which were allegedly "flooding the airwaves." Although it's true that the Trump campaign trails the Clinton campaign in ad spending, pro-Trump super PACs are running anti-Hillary attack ads to make up for that $8 million deficit.

Trump didn't limit his slights to members of the media or to the Clinton campaign: he also went after media personality Donny Deutsch. Oddly enough, Deutsch recently appeared on Bloomberg's With All Due Respect, where he said that Clinton "doesn't tell the truth, is a politician, plays quid pro quo." That was on Monday, Aug. 15 — if Trump's Twitter is to be believed, on Sunday, Aug. 21, Deutsch was both "a big failure in TV" and "nasty, irrelevant!"

If nothing else, this latest Trump Twitter tirade makes it clear that anyone can be insulted by The Donald — even those who were formerly in his good graces. Oh, and one more thing: despite claiming to love winners, Trump hasn't congratulated the many, many U.S. winners from the Rio Olympics.