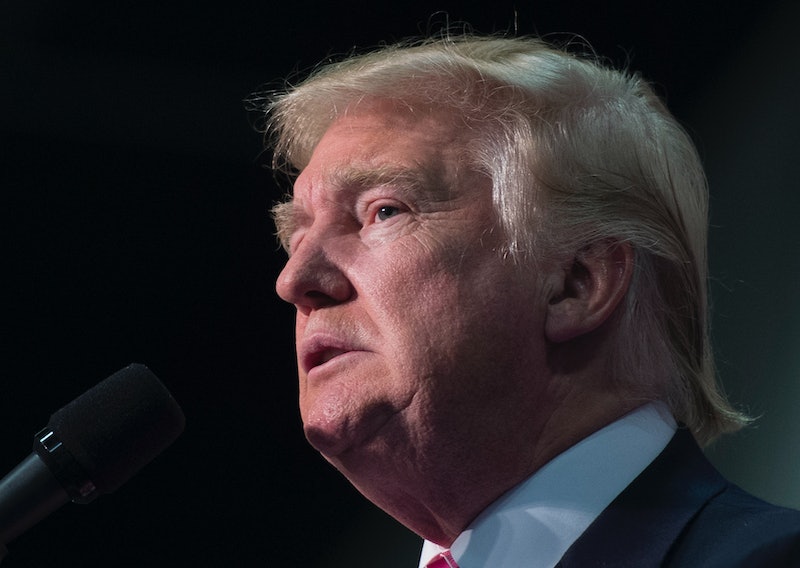 Last night John Oliver gave some advice to Donald Trump: read a book. Particularly one about a sixth-grader who runs for president but then realizes it's not for him. Now everyone tuning into HBO's Last Week Tonight also wants in on the action — not the presidential action but the blossoming Oliver book club. It seems Oliver's Trump advice may have spiked sales of the book, The Kid Who Ran For President.

Oliver may not have meant to play publicist for author Dan Gutman, but he may well have. The sales on Amazon early Monday morning put the book at number 284 of all books — surely higher than it was Sunday morning. In the category "Books > Children's Books > Literature & Fiction > Historical Fiction > United States" it has reached number one.

You see, Oliver explained his Trump theory with this book and it's basically that Trump has three options. One is to lose terrifically to Hillary Clinton, which does not keep with the Trump brand of winning. Also, he can come back from behind and win the election, but then he would have to govern. And three, he could go the route of the protagonist from that book and drop out now. "Simply drop out," Oliver said. "And tell America this entire candidacy was a stunt. A satire designed to expose the flaws in the system."

Evidently there are a fair number of similarities between the Trump campaign and that of Judson Moon, the 12-year-old from Madison, Wisconsin, who wants to shake up the normal contest between Democrats and Republicans, much like Trump. "Grown-ups have had the last one thousand years to mess up the world. Now it's our turn," Moon says in the book. Oliver points out even more similarities between the two.

Moon refers to his potential spouse as "The First Babe," for example. But from there, Moon realizes he can propose policies and that a certain group will support them no matter what. He proposes abolishing homework in his first campaign speech; the crowd went crazy chanting "No more homework!" Trump's speeches are not so different. Oliver explained it to Trump: "If you replace the words "no more homework" with "build that wall," that's basically every single one of your rallies."

Oliver called the book "a foolproof instruction manual" for Trump's dropping out. That's because Moon realizes that he could manipulate his supporters any which way he wants, but that he's also in over his head. Speaking to Trump he said, "Basically this is about you." And he wants Trump to use this bit from the book, the speech that Moon gives when he is actually elected president. Oliver said Trump could use it "word for word":

I have a question for the grown-ups of America ... Are you out of your minds? Are you expecting me to enforce the constitution? I never even read it. I was absent from school that day. Would you really want me as Commander In Chief of the armed forces? What if somebody attacked the United States? Would you really want me in charge? America must be in really bad shape if you elected me president. You better get it together and find some qualified people to run this country or we'll all be in big trouble.

Then the kid resigns, which based on Oliver's argument, is what Trump really ought to do, too. "That is a perfectly Trumpian address. It's a negation of responsibility, an implication of everyone's stupidity, and it's a threat," Oliver explained. Then he spoke to Trump directly, "If you steal it, you'll even be passing off someone else's speech as your own, which I know is kind of a thing for your campaign. This is it, Donald, this is it!" Some wise advice.