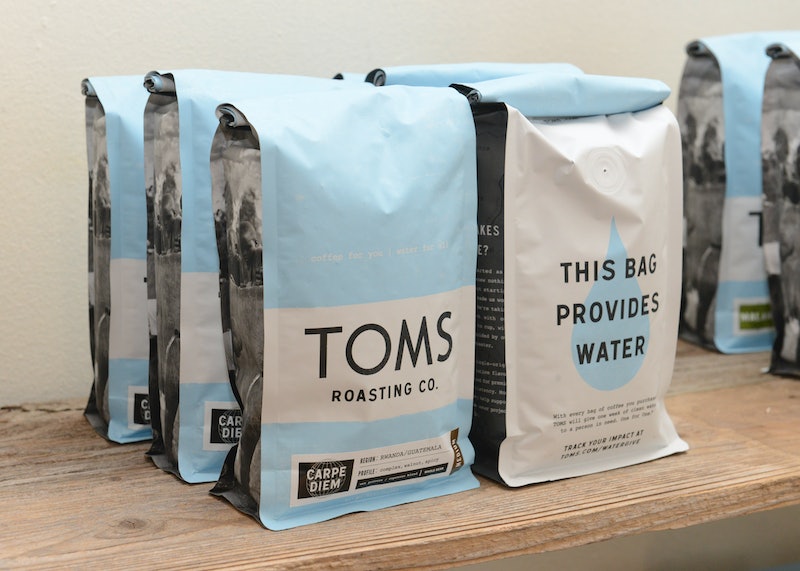 Good news for hipsters who love their coffee almost as much as their idiosyncratic footwear: Toms is now dipping a toe into the coffee industry. The surprising, sideways move was announced by creator Blake Mycoskie at SXSW, much to the confusion of loyal customers who had come to know the brand as a footwear and eyewear manufacturer.

The Toms Roasting Company is offering five organic, fair trade varieties of coffee beans named after the regions where each was harvested, as well as one espresso blend. The company's Malawi has a fruity, chocolate taste; Rwanda is described as "floral"; Peru has a buttery, apple flavor; Honduras tastes of almonds; and Guatemala has an herbal, chocolatey tang. Mycoskie indicated that Toms Roasting Co. may soon be selling its product in coffee shops if all goes according to plan.

The expansion will proceed with Toms' philanthropic "One for One" mantra in mind. In addition to donating a pair of shoes to someone in need for every pair bought, and restored sight to one person for each pair of glasses sold, Toms "will provide one week of clean water to a person in need" for each bag of coffee sold, according to the company website.

The business model seems viable if not genius for several reasons, not the least of which is making coffee addicts feel better about indulging in their habit. The formula also advocates the same principles as the Donna Karan-endorsed Soulful Economy movement, which encourages consumers to take shopping and expenditures as a chance to make the world a better place.

So the next time you're hankering for a cup of coffee, consider that your caffeine fix may help improve the health of someone else in the world... even if the jury is still out on whether the coffee habit is detrimental to your own.

More like this
Phoebe Dynevor Serves ‘Bridgerton’ Underboob In Stunning Floral Gown
By El Hunt
50 Cheap Things On Amazon You'll Get A Ton Of Use Out Of
By Rebecca Martinson
The 3 Best Chamber Vacuum Sealers
By Vanessa Spilios
The 19 Best OPI Nail Polish Colors, According To Manicurists
By Audrey Noble
Get Even More From Bustle — Sign Up For The Newsletter
From hair trends to relationship advice, our daily newsletter has everything you need to sound like a person who’s on TikTok, even if you aren’t.