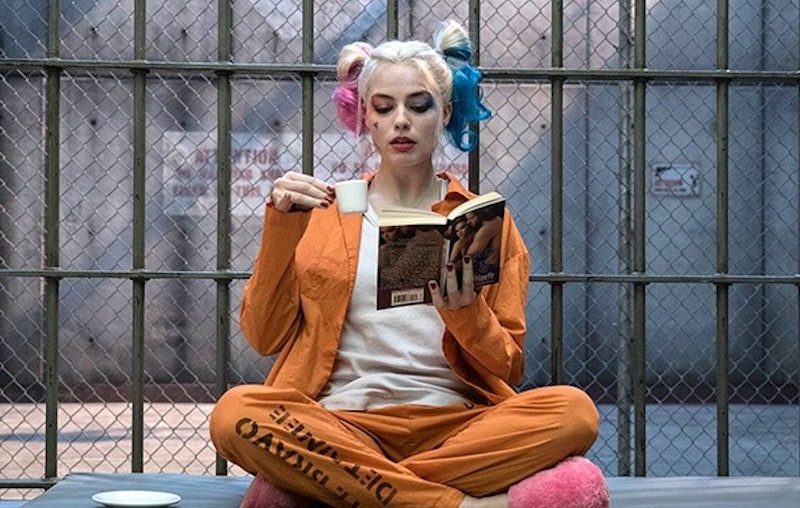 I should confess: I am a Harley Quinn super fan. The fact that she's a woman just adds to my love for her, as, even though I enjoy all of the male superheroes out there, the dearth of superheroines on-screen makes the appearance of one as cool as Harley all that more powerful. Yet while I stan so hard for Harley that I could filibuster about it for 48 hours, I know in my heart that she's too good for us. Despite all the potential she has, Harley has not yet been portrayed on-screen as she deserves. Instead, she's been relegated to being only the Joker's girlfriend, a character without her own agenda or storyline unconnected to that of a man's. She has so much more to offer audiences than her relationship with a male character, and it's up to Hollywood to do her justice. Suicide Squad was a start, but it wasn't enough.

Despite Margot Robbie's impeccable portrayal of Harley in the film, there were significant flaws in her character's development. While yes, it's true that the Joker did manipulate Harley into falling for him and thus caused her to go insane, the elements of who she was as Harleen Quinzel were totally dismissed in the film. In Suicide Squad, audiences saw her more as comic relief than the cunning, frenzied, insane villainess she is. The movie made mention of how dangerous Harley is, and sure, she's seen kicking butt, but what failed to be shown was how dangerous her mind also is.

In SS, we only got to see the ditzy, Joker-obsessed Harley, but in the comics, Harley retains the doctor side of her — she was a psychiatrist prior to being driven insane — even after her time with the Joker. She's not dumb nor ditzy; rather, she straddles the line between sociopath and empath. In comics like The New 52, Harley is shown standing apart from the Joker, helping stray animals, getting back to her psychiatry roots, and creating her own crime-fighting team in Coney Island. Sometimes she's a crazed lunatic, yes, but other times, the compassion she once showed as a doctor comes out. She's complex and layered and far more than just the Joker's sidepiece. And when the Joker pushes her too far in the comics, she leaves him, showing off a strength and independence totally ignored in SS.

But even if that side of her were to be explored on-screen, I actually find that the “Joker years” are hardly Harley’s most exciting era. In the comics, specifically Gotham City Sirens , Harley teams up with Poison Ivy and Catwoman, forming a trio dedicated to protecting each other at any cost. To me, seeing three incredible female characters on-screen as a team would be far more interesting than seeing the Harley/Joker relationship, especially because it’s been revealed that Harley and Ivy are in a non-monogamous relationship. Yep, that’s right — the Joker isn’t Harley’s only lover. Imagine seeing two badass female superheroes on-screen who also happen to be in love with each other? It'd make for such an interesting storyline.

As would a Harley Quinn origin story. What if we got a movie about Harleen Quinzel, a teenager in Brooklyn? In Gotham City Sirens #7 , it’s revealed that Harley comes from a Jewish-Catholic family. Harley’s father is an abusive con artist in prison. Her brother, Barry, takes her money, and her mother, Sharon, wants her to stop being a villain. It's revealed that Harley decided to become a psychiatrist so that she could understand her own broken and dysfunctional family. Watching a young Harley on a journey to understanding her family only to then fall victim to a sociopath herself is a story I truly want to see on-screen.

While Harley’s abusive and deranged relationship with the Joker is always going to be part of her story, she’s proven — whether in Gotham City Sirens or The New 52 — that she can rise above that to stand on her own. So why hasn’t Hollywood tapped into that yet? It might be happening soon, as, according to Vulture, DC is reportedly gearing up for a Harley Quinn spinoff with Catwoman, Poison Ivy, and the Birds of Prey possibly joining her on-screen, but that hasn't been confirmed, and it's possible it won't actually come to fruition. Besides, part of me worries that even if the movie does happen, Harley still won't be portrayed as she deserves. She could still be reduced to nothing more than an overly sexualized (those shorts!), ditzy woman who is continuously linked with the Joker, and it could be just one more opportunity missed by studios to give Harley the character journey she warrants.

Harley has so much to offer the comic book film world: a chance to expand the DC universe, tie the entire DCEU together, and bring studios another Deadpool-type of character, comedic but unconventional and badass. She could be a true supervillain, with her worth not tied to anyone else's, rather than comic relief who, despite defeating the threat in Suicide Squad, still needed to be rescued by the Joker at the end. So far, she's been reduced to a damsel, not the capable, independent, and strong character she is — but perhaps a solo film, if it happens, would change that.