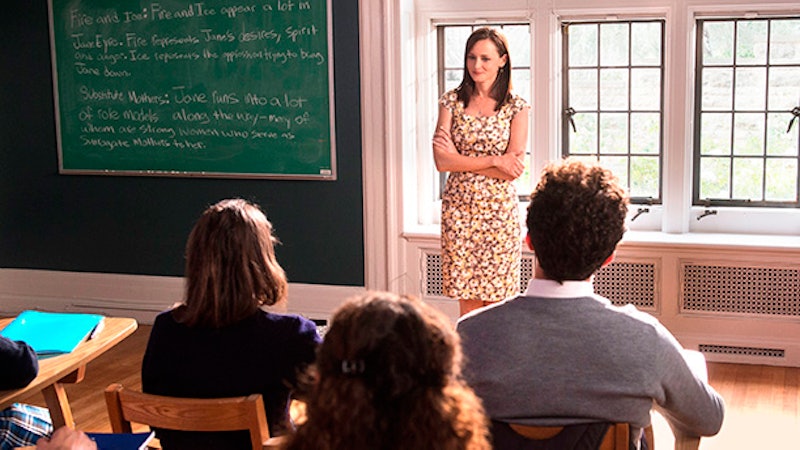 I know we want only the best for our Gilmore Girls in the upcoming Netflix revival, but it looks like one half of the equation is going to be going through a rough patch when the show debuts November 25. It's been hinted that Rory is going to be struggling with her career and life at the onset of the four-episode limited series via creator Amy Sherman-Palladino herself. Sherman-Palladino spoke of Rory's upcoming quarter-life crisis, saying, "It's this idea of, you hit [your 30's], you did everything right — you went to college, you had the good grades, you worked really hard — and yet somehow life isn't turning out the way you wanted it to turn out." So it turns out that Rory is All Of Us in this new GG chapter... and I honestly couldn't be more stoked about it.

A lot of that excitement stems from my low-key annoyance about the focus on Rory's love life. The fandom has huge emotional stock over what ex-boyfriend Rory will end up with, and that's the conversation that's dominated most discussions about the revival. Make no mistake, I am solidly Team Jess and will go down with that ship if the time comes. However, it is a little disheartening we, as an audience, have made that a focal point when it comes to one of the most ambitious young women in modern media. At the Gilmore Girls TCA Panel Alexis Bledel addressed that fascination, saying, “There is so much more to her character. It’s great when people focus on her ambition and her accomplishments.”

By placing some of the struggle on Rory's career, we're moving the discussion a few steps left of the Great Gilmore Relationship Debate. We're giving her something to work on as a person, a journey that has her finding satisfaction outside of ending up with someone she dated in her teens. Taken out of the context of a show, it's very strange when people wonder if you're going to end up with someone you dated over a decade ago. Most of those people were unviable for longterm. Like, if there's anyone out there shipping me with my high school boyfriend, I'm getting published in a book. He works at Staples. Let's move on.

In contrast, I'm also really excited for Rory to have some genuine adversity in her life. Every once in a while Gilmore Girls seemed gung-ho in convincing us Rory was the most special snowflake in Stars Hollow, For example, Rory winning Valedictorian at Chilton? Entirely undeserved. The kid who transfers mid-semester sophomore year and gets a D on a routine quiz does not score that spot. No matter how hard Paris jeopardized herself, someone else would've intercepted.

And there isn't a question about whether Rory is hardworking or not. She's proven time and time again to be the consummate overachiever. Her early adolescence was spent with her nose buried in a book, eyes only gazing upward to set her sight on a top three Ivy. Likewise, the series shows cracks in Rory's facade of perfection as it goes onward. Although we have it burned in our mind that Rory is a "good kid" who would never do anything reckless, she periodically follows her impulses into catastrophic territory. The show doesn't lie to us and try to convince us Rory is perfect, necessarily, special snowflake or not.

But there is something slightly strange in the way Rory lives and died by her adolescent choices. It made her a little unrelatable and certainly a bit too frustrating to sympathize with, especially as we approached the later seasons. I don't expect a huge character overhaul. I just think the idea of Rory struggling in her career could foster some serious growth.

So maybe it sounds cruel, but I want to see Rory struggle. Or not even that... I want to see Rory fight in a real, tangible way. I want to see her attack a problem using her intellect and drive instead of panicking and running away to Europe, or stealing a yacht. I want her to take criticism in her stride, letting it fuel her, not taking one hit on her self-esteem and doing drastic things like dropping out of Yale. I want Rory to be someone we admire not just because she reads a lot or got good grades, but because she's blossomed into a strong young woman who can take control of her life. And having her undergo that struggle like a real human being is the way to do it.

Do I think it will end up that way? Not really, because in the overwrought world of a dramedy, the stakes have to be high. Chances are Jess will encourage her to dive back into journalism or something, and that'll lead to their romance reigniting and subsequent personal fulfillment. All I'm saying is, the possibility of a Rory Gilmore based in reality thrills me, and I look forward to watching her overcome obstacles. It's about time that this Gilmore Girl becomes a Gilmore Woman.