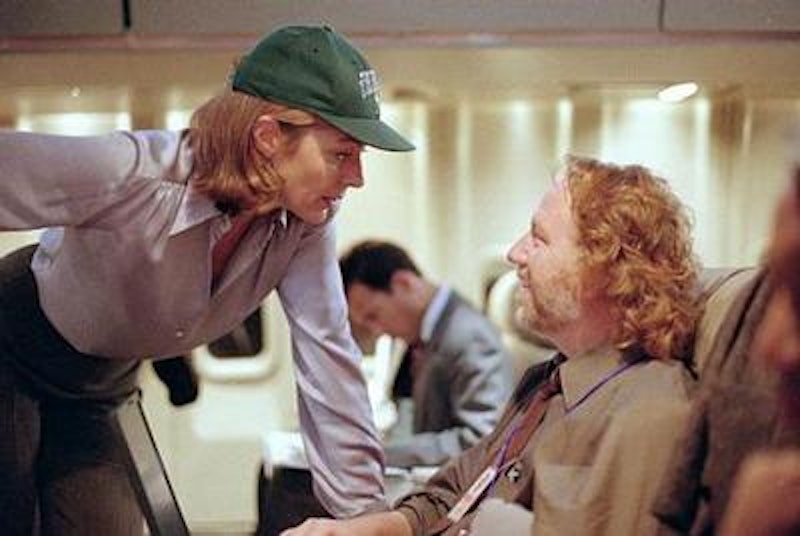 There are so many characters to love in The West Wing that it's hard for them all to get the love they deserve. Danny Concannon was one such character, and there's one Danny storyline on The West Wing that fans and non-fans alike should pay more attention to. The specific storyline I'm thinking began in Season 4, Episode 11, which is called "Holy Night," and the arc is the best one to watch, because I don't think fans give Danny enough credit for just how good he is at his job.

As I'm sure you remember, Danny is a Pulitzer Prize-winning journalist, White House correspondent, and President Jed Bartlet's favorite reporter. But he tends to stick a lot more firmly in people's minds for his relationship with C.J. Cregg than for his career. And why wouldn't he? I'm immediately on board with anyone who sees what C.J. has to offer and links up with her romantically. However, I do want to make sure that the character of Danny also gets his due as an individual.

It's revealed early on that Danny has been a White House correspondent for seven years, which explains his comfort there and closeness with some of the members of the staff. But, in "Holy Night," Danny returns — to the show and to the briefing room — from his placement as a foreign correspondent, looking for answers about the death of Abdul Sharif. Sharif was the Qumari terrorist leader, whom the Barlet Administration had secretly assassinated after realizing that they'd never be able to bring him to justice for his crimes of terrorism due to his status as a diplomat.

It was a difficult decision, and a controversial one even among the few members of the staff who knew about it. When a show takes a big swing like that, and comes down on one side of a tough issue, we as an audience tend to assume their take is the correct one. Which is why I thought it was so interesting and bold and, frankly, cool, that The West Wing then brought Danny back as a foil, to dig around the rumors of the assassination he was hearing, and remind us that this isn't how we do things in the United States. Or internationally, for that matter.

Like many of the characters with meatier roles throughout The West Wing, Danny was proof that empathy doesn't need to get in the way of doing your job. He was a lovable character, capable of immense kindness in his gentler moments, but absolutely ruthless when it came to reporting. Once he'd revealed his intention to get to the bottom of the Sharif story, Danny didn't let his feelings for C.J., or any of the other staffers get in the way. He didn't believe the lies he was being told about the Administration's lack of involvement in Sharif's death, and he finally got enough evidence to publish in Season 5, Episode 1, "7A WF 83429."

Again, this is an exchange between a man and the woman he later marries, and yet neither C.J. nor Danny let themselves be swayed from their points of view. Fans worship C.J. for this same backbone, but Danny also deserves a tip of the hat for standing his ground in the service of his profession. He is ultimately convinced to hold off publishing, but that order comes from Leo McGarry, and it's in the service of national security, not as a "favor," or anything emotion-based like that. (And anyway, C.J. urges him to publish early when it becomes obvious that sitting President Walken is going to undercut their agreement.)

Danny is just one of those characters who always does the right thing, and his storyline from the middle of Season 4 to the beginning of Season 5 is proof. He earned a spot in fans' hearts for being a fitting match for C.J., yes, but Danny deserves just as much credit for keeping the heat on the people he loves and respects if he feels like they're in the wrong.