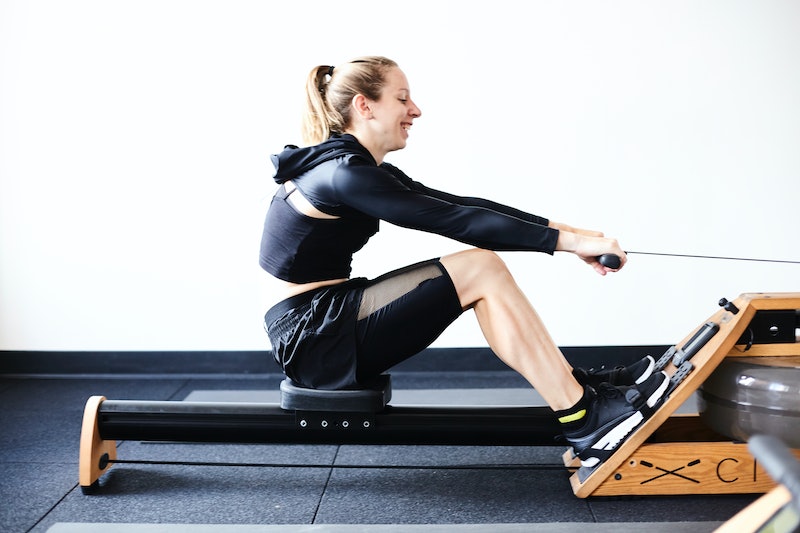 Despite my best efforts, I was cut from the middle school soccer team in seventh grade, prompting me to pursue a new sport. The field hockey coach was actively recruiting, so I was instantly accepted on the roster. I was excited to receive my uniform for our first match, only to be disappointed when I was handed a plaid kilt instead of the sporty athletic shorts worn by the soccer team. I remember thinking, What the heck am I supposed to do in this...go to brunch? Okay, I’m lying — my 12-year-old self didn’t have a clue how important brunch would be in my 20s. Yet the illogicality of playing a sport in a skirt really irritated me at the time. It still does! As I got older and played at a collegiate level, those plaid skirts transformed into sleeker, more athletic-looking skorts, but the main issue remained the same: the outfit just didn’t make sense!

Today, I’ve found that the skyrocketing athleisure trend and my old field hockey kilt have a lot in common. Fashionable “activewear” intended to take women seamlessly from the gym to an outing with friends is often impractical for a workout. I mean, do apparel companies really expect us to go jogging in a romper, power through cardio class in an athleisure dress, or efficiently master a burpee in fake leather pants?!

To find out just how functional certain athleisure wear can be, we partnered with smart water® to put three different athleisure outfits to the test: a tough workout followed by brunch. After consulting with Bustle Studios' fashion editor and perusing some of the most popular activewear brands and styles on the market, I chose three contrasting outfits for my experiment: a preppy tennis dress, a daring mesh ensemble, and a trendy crop top and leather-esque bottoms pairing. Here’s how these various "activewear" outfits held up to their claims of being clothes designed to be worn for exercise, brunch, and everything in between.

One thing you should know about me is that before the age of 12, I would not willingly wear a dress anywhere. Today, I wear dresses to work all the time, but I still stick to traditional activewear, like moisture-wicking tank tops and compression running tights, when exercising, which is something I do often. (I’ve run nine marathons to date, and am currently training for my first Ironman).

My dress backstory is important when considering that the first article of athleisure-wear I chose to test was a fit-and-flare, racer-back tennis dress. Paired with complementing stark white sneakers, the “mini dress with a sporty twist” looked like something a professional tennis player might wear to Wimbledon. However, instead of heading to the tennis courts — women have historically worn skirts or dresses at Wimbledon for over a century — I was heading to a boutique fitness studio in Tribeca for a total body conditioning and strength training class.

I felt self-conscious the moment I stepped into the studio, and could feel other class goers’ eyes on me and my, uh, interesting outfit choice. While the dress was undoubtedly comfortable (it’s 88 percent nylon and 12 percent spandex), it was a daring option to rock for a class that involves jumping on a trampoline, swinging TRX suspension bands, and lifting weights.

For the most part, the dress was functional for the class — though I was overjoyed to be in the back row during a series of mountain climbers and burpees that caused my dress to flare up, revealing the minuscule spandex shorts I had pulled on as a "safety" measure. Besides the confused looks I received, the only other time the dress was an issue was during a weightlifting sequence when the flared skirt kept interfering with the motion of pushing a dumbbell across my body and over my head. It didn’t ruin the movement completely, but it did cause me to continuously adjust my form.

The least practical part of the outfit? The shoes. Designed for style over comfort and durability, I was lucky I didn’t get any blisters.

After the workout, I headed to a nearby coffee shop, where I had planned to grab a quick brunch with a co-worker. I felt more at ease in my ensemble outside of the gym. Plus, now I had a buddy with me to give me a little more confidence.

I must admit, though: the toughest part of everything (the workout and brunch combined) was trying not to spill coffee on my bright white dress.

Next up? An all-black ensemble that reminded me of something a villain on a teen drama would wear (a very fashionable villain, of course!). While the staples of any good workout outfit were there — elasticity, pockets, and a dark color to hide sweat stains — the details were a little showy for my liking. Not only did the shorts have a layer of mesh underneath them, but the long sleeved, hooded top I had thought was a crop top when I ordered it was actually nothing more than sleeves and a hood. That’s right: an actual, functional shirt was not included.

After pairing the hooded separate with a matching black crop top and complementing sneakers, I was ready for my next adventure. I chose to test this outfit’s abilities against an indoor rowing class that pairs intervals of rowing on a rowing machine with basic functional bodyweight movements on a yoga mat off the machine. To my surprise, the mesh under layer of the shorts was super comfortable and easy to move in — both atop the rowing machine and while doing planks, lunges and core work on the mat. However, the hood and sleeves of the top piece were more hindering than helpful (the hood kept swinging in my face during bodyweight exercises, and I got overheated quickly).

After the first 15 minutes, I was so warm I ditched the sleeves and hood completely, shrugging it off in between intervals and flinging it to the side of my mat. Perhaps the "unique layering piece" (as it’s described on the website) is a better fit for pulling over a tank top to wear to and from the gym, rather than during an actual workout.

Once the demanding class was over, I was relieved to head to a popular nearby brunch spot to refuel and rehydrate. In the outdoor seating section of the restaurant, I was glad to have sleeves and a hood again to shield me from the breeze. While the mesh under layer of my shorts made me feel like I was dressed for a night club rather than brunch, I didn't attract nearly as much attention as I imagined I would. This is New York City, after all… it takes a lot to turn heads!

Since the second outfit had clued me into what working out in a hooded top was like, I wasn’t stoked to put on my third outfit choice: a trendy, cropped, lace-up hooded sweatshirt, leather-­esque leggings, and loud, silver sneakers. While the pairing was undoubtedly chic and stylish, I was skeptical about how it would hold up in the strength and conditioning class I was signed up for. I’ve taken classes at this particular studio before, and they are no joke. Workouts involve sprints, battle ropes, and bodyweight circuits; and I usually leave the gym sweaty, sore, and a little humbler than I was when I walked in.

To my surprise (and delight), the leather-esque bottoms — which I expected to be designed for style over comfort — felt like a second skin, which made squatting, jumping, and burpee-ing easy (well, as "easy" as those activities can be, anyway). However, while the cropped sweatshirt was cozy and comfortable, again, I was distracted by a hood swinging in my face, and the fuzzy material, combined combined with cardio, instantly made me a little too sweaty. Thirty minutes into the class, I was very happy I had thrown a shirt on underneath, and ditched the sweatshirt completely.

The other thing I would have changed about the outfit was the shoes. While they looked comfortable (not to mention cute!) and were from a reputable activewear brand, they were more suitable for a day of walking tours than a grueling, hour-long workout.

My instructor barked, “Get up off your knees! Those leggings are too nice to get turf burn!”

Though I didn’t expect to get as many raised eyebrows out of this outfit as I did from the tennis dress, I did get more attention than I expected. During a round of bear crawls, an exercise that requires you to move forward on all fours, I slipped to my knees and continued to crawl. My instructor barked, “Get up off your knees! Those leggings are too nice to get turf burn!”

I begrudgingly resumed the right form -- after all, she was right.

Once class wrapped up, I pulled my sweatshirt back on and headed off to grab coffee and a bite to eat with a girlfriend. By far, this outfit felt the most natural to sport on the streets in between a workout and a meal. Upon meeting my friend at the brunch location, I was instantly greeted with, “I love those pants.”

And you know what? I do, too! I think I’ll save the sweatshirt and shoes for less vigorous activities from now on, though.

So. What Did I Learn?

At the onset of this experiment, I was convinced that each of these outfits would be impossible to work out in, not to mention cause a spectacle at the gym. I was wrong! While the functionality of these outfits admittedly could be better, especially when it came to the footwear, I was surprised at some of the clothes' performance ability. Additionally, despite dressing like I belonged on a runway instead of inside a gym, my instructors and classmates didn’t treat me any differently (aside from a few side-eyes). To make a long story short, I guess I shouldn't be so skeptical when it comes to athleisurewear, but instead give it a chance to prove itself first.

No, I won’t be trading in my current activewear for any of these "more fashionable" athleisure looks anytime soon. But I will be keeping those leather-esque pants.

Created by Bustle in partnership with Glacéau. “ s mart water®” is a registered trademark of Glacéau.

More like this
9 Exercises To Try For Volleyball Strength
By Carolyn Steber
What The Lionesses’ Win Really Means For The Future Of Football
By Angelina Kelly
Abtaha Maqsood Wants To Change The Way You Think About Cricket For Good
By Shahed Ezaydi
The 8 Best Stretches For Golf, According To Pros
By Carolyn Steber
Get Even More From Bustle — Sign Up For The Newsletter