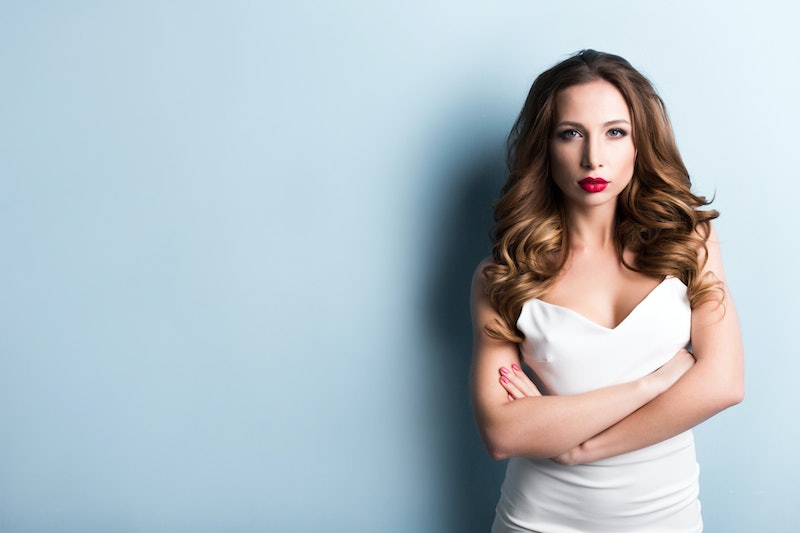 Whether women are wearing burqas or bikinis, people will find some way to criticize how they're dressed — and the cartoon "The Lottery of Indecency" ("La loterie de l'indécence" in the original French) reveals exactly why this is. The policing of women's clothing choices is about neither making public places habitable nor empowering women. It's about gender stereotypes and a larger effort to control women.

The cartoon, shared in a tweet by @LaSauvageJaune, shows a woman split down the middle, one side in clothing that covers every inch of her and no makeup and the other topless and wearing makeup. The writing is in French, but according to a translation by The Independent's Indy 100 blog, it describes criticisms people commonly make toward both types of self-presentation. Click here to see the NSFW cartoon in full.

The woman on the left side is in a burkini — swimwear worn by some Muslim women that covers the entire body. Burkinis were recently banned in several French municipalities on the grounds that they're "religious offenses." Women who cover themselves up for religious reasons have long faced criticism on the grounds that this practice symbolizes being out of the public eye and under men's control; accordingly, this section of the cartoon reads, "You’re obedient for sure!" the cartoon reads. However, many Muslim women have said that their headscarfs are actually symbols of their devotion to their faith, their resistance to objectification, and other aspirations that have nothing to do with being puppets of the patriarchy.

Then, on the flip side, women face criticism for wearing makeup, wearing revealing or little clothing, and doing other things Western society prescribes as desirable that are embodied on the right side of the cartoon. While this societal prescription may be harmful, the free choice to follow it is not. We don't, after all, penalize men for working out or taking their shirts off.

"You look like a whore with your makeup. If you’re not wearing any makeup, you look neglected," the cartoon reads. "Long skirt? Too religious! You don’t belong in a school. ... Short skirt? Too sexual! Don’t be surprised if you’re raped." In other words, there's no way to win — because people who want to focus on women's looks and control them will find a way to do that, regardless of what the woman looks like. Even when a woman is somewhere between entirely covered up and not covered at all, misogynists will decide which side of the line she falls on and criticize her for it. "In the lottery of indecency, the woman is the only loser," the cartoon concludes.

The contradictions within these criticisms expose how illogical and baseless they are — and remind us that listening to them is not only unnecessary but also useless. It's a game we can't win and one we didn't even consent to playing, so we'd might as well not compete. Besides, we're stronger when we view one another as allies — not as competition and not as objects to control.