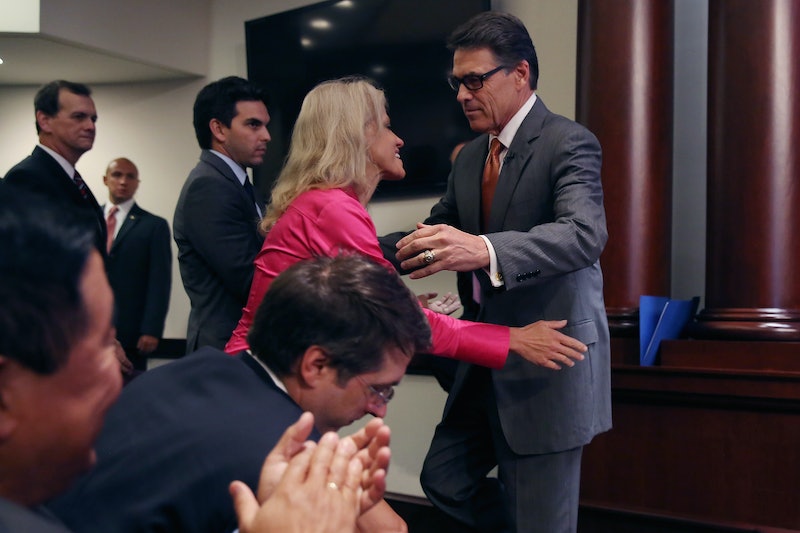 In an election year like no other, American voters have endured Donald Trump's misogynistic rhetoric, vague platforms, and outrageous (and false) claims. Fortunately for Trump, who was polling behind Clinton last week, his campaign has just brought in a woman who might be the most qualified for handling such a candidate. Who is Kellyanne Conway? Trump's new campaign manager has spent much of her life advising Republicans on how they can appeal to female voters. And now she's making history with Trump, as she's the first woman to run a Republican presidential campaign.

Conway knows what voters want — especially women voters. More than 20 years ago, she founded The Polling Company, which provides research on voter attitudes, behaviors, and desires. Trump isn't Conway's first client with presidential aspirations. She's also worked with Ted Cruz, Newt Gingrich, and Trump's running mate, Mike Pence. She also co-wrote a book, What Women Really Want: How American Women Are Quietly Erasing Political, Racial, Class and Religious Lines to Change the Way We Live, in 2005. While she once ran a super PAC committed to electing Cruz and eliminating Trump, called Keep the Promise PAC, she's since changed her tune and signed on with the last 2016 Republican candidate standing.

Conway isn't new to television, either. She's been on shows like Meet the Press and Real Time With Bill Maher, and networks like Fox News, CNN, and MSNBC, among others, according to People.

Voters may have heard of her before — if not from her various TV appearances, but because of one of her former clients. In 2012, Missouri Senate candidate Todd Akin became famous for his "legitimate rape" gaffe, in which he implied that if a woman didn't consent to sex, then her body would shut down the possibility of pregnancy. Honestly, if Conway's career survived working with Akin, she is probably one of very few people who could make it through the rest of the election year working with Trump. It will be interesting to see how Conway shapes Trump's campaign going forward. The Washington Post has already pointed out her dislike for Trump's name-calling, and CNN has brought up her previous support of undocumented immigrants. Perhaps these two things alone make her a curious choice, but they are also possibly something that could work to earn more support for Trump, if she softens his views on immigration and speaks more respectfully to people.