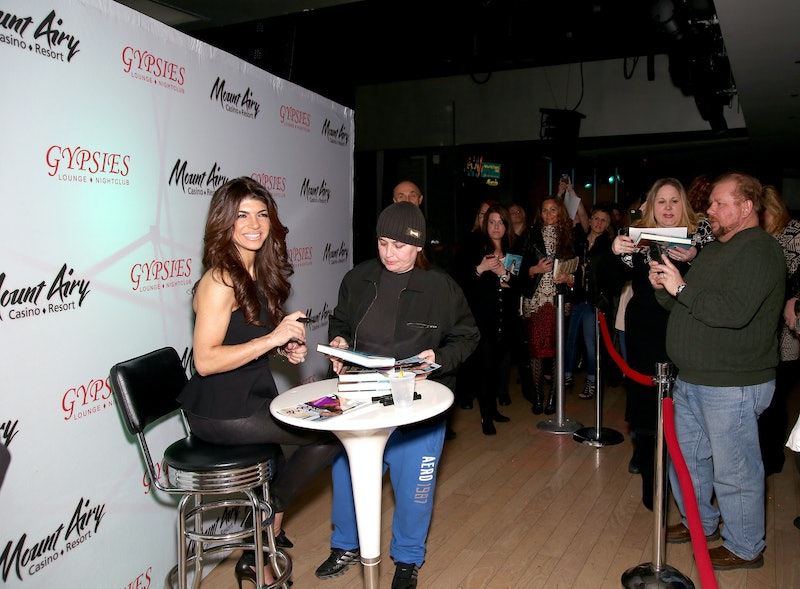 With as busy as they seem on their various shows, I often find myself wondering how the Real Housewives manage to work on so many projects at once. For example, did Teresa Giudice use a ghostwriter for her book? The Real Housewives of New Jersey star released her book Turning the Tables: From Housewife to Inmate and Back Again on Feb. 9, 2016, a little under two months after she was released from prison. I'm sure she has a lot to talk about, after spending 11 months behind bars, and that she had a lot of free time to spend writing, for the same reason. However, she also has four daughters and a husband starting his own prison term to think of, so I wouldn't blame her if she'd wanted to collaborate with a professional for her first non-cookbook. But, as it turns out, Giudice does not seem to have worked with a ghostwriter.

There's always a possibility that there are more people behind the scenes whose names haven't been released, but it appears that Giudice worked with what's called a co-author instead. It's a fairly standard practice in a situation like this, where a celebrity has lived an experience that he or she wants to share, but doesn't have the writing experience to pull it off to the level they might want. So they bring on a co-author, someone who has those writing chops but is maybe not a big name, and is willing to work with you to get your story out there. It's kind of like being a songwriter — you're able to pen a song for another artist using your knowledge of their voice and their experiences.

The writer that Giudice worked with for this project is named KC Baker, and she's worked as a staff-writer at People and the New York Daily News. Her Simon and Schuster bio says that Turning the Tables is her third book, and unlike ghostwriting – but just like songwriting — Baker is actually receiving all the credit she's due. Right on the book's cover is a little note indicating that Giudice wrote Turning the Tables "with KC Baker," and Baker promoted the release of the paperback edition on her own Twitter. No one's hiding anything here.

There is sort of a stigma about using a ghostwriter and then claiming the work is your own — even though that's exactly the arrangement a ghostwriter is being paid for — so I'm glad that Giudice is being very upfront about the level of collaboration on Turning the Tables. I hope she's as transparent with any and all books that she comes out with in the future.