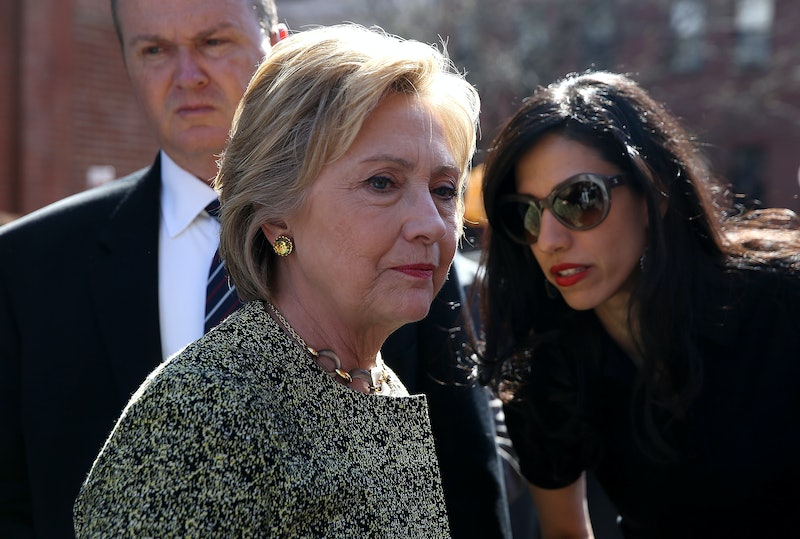 Well, it has begun. And sadly, no one should be surprised. Conservative media outlets are using Huma Abedin 's Muslim beliefs against her boss, Hillary Clinton, unfairly attacking the political staffer. According to The New York Post, Abedin served as a White House intern during Bill Clinton's presidency, and worked alongside Clinton during her time serving as a senator of New York and as President Obama's secretary of state. Abedin is now Clinton's top aide, and may become the White House chief of staff if Clinton is elected president.

Clearly, Abedin is a highly successful member of Clinton's staff. And yet she's being scrutinized for her religious beliefs and family ties. Or perhaps Abedin is being targeted because she is so successful. In what is a rather obvious attempt to focus more negative attention on the Clinton campaign, sensationalized conservative media outlets, from The New York Post to Fox News, have reported that Abedin edited a supposedly anti-American publication, The Journal of Muslim Minority Affairs, and implied that Clinton's ties are anti-American, which they're obviously not.

Here's the thing: Even if Abedin did work for the Saudi journals that her mother edits, her religion should not be used against her or her boss. In fact, such xenophobic attacks really are anti-American.

Furthermore, The Journal of Muslim Minority Affairs is a highly-respected social science journal, and Abedin's mother is a scholar, not an anti-America crusader. Additionally, Clinton told The New York Post that Abedin's name was simply listed on the publication's editorial page — apparently, Abedin actually had little to do with the journal.

It's likely that the Clinton campaign has expected questions around Abedin's religion to surface for a while now. Trump has called for a ban on Muslims entering the United States, and Islamaphobia is becoming more and more widespread. Thanks to Trump's anti-Islam stance, many Americans supporting the Republican candidate have intensified their prejudices against Muslim Americans, making Abedin the perfect target of attack from conservatives. Not only is Abedin a successful Muslim American, but she's also a top Clinton aide — a story that is all too easy for conservative publications to sell.

The Aug. 21 New York Post article on Abedin essentially called the Clinton aide a hypocrite by questioning how she could work for a candidate known for her belief in women's rights and be the daughter of a woman who has edited a publication that has supposedly published articles sharing contradictory anti-feminist arguments. It's downright insulting that Abedin has to face such criticism — as if she cannot have beliefs different from those of her mother (which assumes that her mother believes all the opinions stated in a journal she edits). In fact, what's actually hypocritical is the sexism inherent in calling out Abedin for something her mother may believe.

It's time to call out the recent reports on Abedin for what they are: a newly devised sexist means of shedding doubt on Clinton by exploiting and spreading anti-Muslim prejudices already on the rise throughout America.