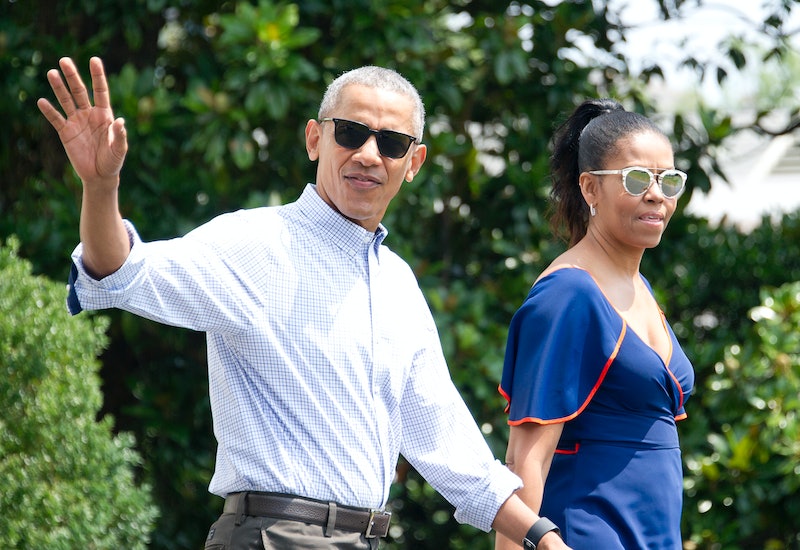 The Obamas' story has gotten the Hollywood movie treatment in the new film Southside With You. No, not the story about how Barack Obama inspired a nation and became the first ever black president of the United States, but instead the story of how he and First Lady Michelle Obama (née Robinson) met and had their first date. It's a charming, romantic, and intriguing tale, but what do the President and First Lady think of it? Have the Obamas seen Southside With You ?

Given how busy they are, it doesn't look like the First Couple has yet had a chance to watch the fictionalized account of their first date. However, that doesn't mean the Obamas are unaware of the movie's existence. Back in January, during the film's premiere at the Sundance Film Festival, writer-director Richard Tanne fielded a question about whether or not Barack and Michelle had seen the film. "We've heard from some pretty reliable sources that they are aware [of the film],” Tanne claimed, according to Vanity Fair. “They are excited. And they are also a little baffled by its existence."

Producer John Legend also claimed that the Obama administration was aware of the film even before it was made. "Their camp has seen (the script) and no one tried to stop us from making the film," the singer claimed to USA Today's Andrea Mandell in an August interview. And with the movie hitting theaters this weekend, there's a chance there could be a screening in the White House as well. "They have been sent [the movie],” Legend said. “So hopefully they’ll watch it soon."

Even though it doesn't look like the Obamas have had a chance to watch Southside With You, the possibility that they own the movie and are reportedly excited that it's a thing hopefully mean that fans can look forward to reading their review sooner rather than later.

More like this
Here’s How Lizzo Is Supporting Abortion Rights After The Roe v. Wade Reversal
By Brad Witter
Everything You Need To Know About The 'Knives Out' Sequel
By Grace Wehniainen
9 Photos Of Margot Robbie & Ryan Gosling As Rollerblading Barbie & Ken
By Alyssa Lapid
What Does The Presley Family Think Of 'Elvis'?
By Arya Roshanian
Get Even More From Bustle — Sign Up For The Newsletter