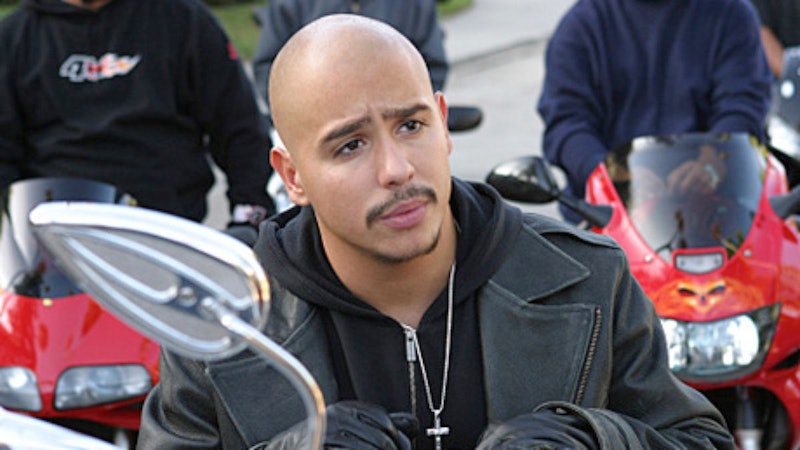 There are a lot of crazy characters who exist on the seedy underbelly of Neptune, but few are quite as captivating as Eli “Weevil” Navarro. I mean, there’s no denying that your feelings towards Weevil throughout Veronica Mars shifted in one way or another. Without question, the PCH Biker goes from lightly despicable to entirely endearing back and forth throughout the series, and there are few moments where fans can truly claim Weevil as “lovable.” However, Weevil is an unappreciated gem in Veronica Mars because of his position as a complicated character within this complicated town.

You really have to take a critical eye throughout the three seasons (and yes, one incredible movie) to see Weevil’s integral part in the Veronica Mars franchise. As an individual, he’s an intriguing bastion of contradictions, boasting a rough demeanor but betraying a hidden gentleness. The latter helps viewers deeply sympathize with Weevil’s constant struggles (and they are constant). But he’s also valuable for what he brings out in other characters on the show. While not every main character is a flat-out 09er, Weevil bears the distinction of perpetually getting the short end of the stick. It helps him both relate to and undermine some of fans' other all time favs, and it’s definitely a trip to watch.

1. He Debuts As A Sleazeball Gang Member But Starts Transitioning To Fully-Rounded Character Very Quickly

Duct-taping Wallace to a pole is a scumbag move, just like being leader of a gang. Weevil certainly doesn't give up that position immediately, but once Veronica enters the scene, his edges begin to fray ever-so-slightly.

2. He Nails So Many Of The Traditional Markings Of A "Bad Boy" That It Almost Feels Classic

He has tattoos, he rides motorcycles, he partakes in underground poker games, he's from the quote-unquote wrong side of the tracks... he fits into this neo-noir world very comfortably.

3. His Undying Love For Lilly Kane

And he has the ink and the tears to prove his devotion. It's ultra heartbreaking because the couple kept their brief fling a clandestine affair, as Lilly had an '09er reputation to maintain. Saaaad.

4. His Loyalty To Veronica

While a lot of their relationship is sort of mutually opportunistic, there's such a respect between Weevil and the pixie-sized sleuth, not to mention a trust that you know Weevil doesn't often get. They spend three seasons forming a genuine friendship, one that borders on adorable.

5. His Only Desire In The World Is To Make His Grandma Proud

OK, it's not his only want, because you don't turn to a life of crime in order to please Abuelita. Regardless, Weevil wants to make good by at least completing high school, which brings me to Chapter 32 of Weevil Gets Shafted...

6. He Was Denied His Diploma And It Was A Gut-Wrenching Moment

By the end of Season 2, fans have seen Weevil's softer side and are banking on his one moment of glory. However, this is Neptune, a place where justice struggles to bubble up from the surface. Sure enough, Sheriff Lamb decides now is the moment to arrest Weevil for Thumper's murder, and it's so palpably unfair that fans' hearts sink for him. And that takes me to Chapter 33...

7. Weevil Gets Unfairly Scapegoated For Every Crime

Initially Weevil exists as a fitting figurehead in the Neptune class wars, and his lack of socio-economic privilege is certainly what helped inform his life as gang leader. But even as he tries to straighten up in the later seasons, he's routinely targeted (and framed) as a suspect by the police. This trend continues into the movie, and by that point it's so difficult for Weevil not to just do the self-fulfilling prophecy thing.

8. But He Historically Makes An Effort To Be Better, In Spite Of It All

It isn't always a consistent effort, but it's worth noting that Weevil has tried to reform time and time again after abandoning the PCHers. Again, given the fact that Neptune Law constantly targets him, Weevil has to make due with whatever jobs are available, and throughout Season 3 (through Veronica's help, mostly) we see him pursuing honest work. Mostly.

9. He Serves An Important Foil To Logan

Both are marked by their ties to Lilly, their rebellious ways, and their mutual hatred. They also work to highlight each other's flaws, and Weevil, the grandson of the Echoll's family's maid, especially showcases the fact that Logan's rich boy rage is sometimes a little bit unjustified. It's an important dynamic.

10. His Adorable Appearance As A Fully Reformed Family Man In The Veronica Mars Movie

"I'm attending tea parties at doll stores, this kid rules me," he says of his 3-year-old daughter, and the audience gives out a collective "Awwww!" to compliment their giant "What?!"

11. The Fact That His Story Is Always Developing

It isn't that Wallace and Mac don't find themselves in high intensity drama. It's just that they don't get constantly wrangled back by the mistakes of their past, whether it's legitimate or not. Weevil is always going to be Veronica's most fascinating friend, because there exists a real struggle of light and dark in him, and societal factors keep pushing him towards the latter. Weevil is the ultimate product of his environment, the corruption of Neptune that defines this series.

In spite of his best efforts, he hops back on that bike at the end of the film, promising that this is not over yet. I hope for his happiness in the sequel, but I'm sure the ride won't be so smooth. Images: Giphy (11)