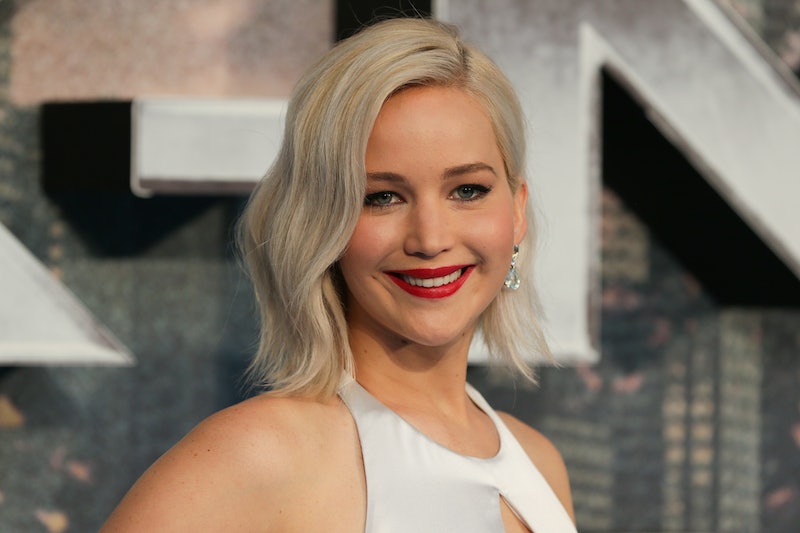 Over the years, even Hollywood's biggest stars haven't been immune to the gender wage gap. But if there's one Hollywood actress who is making a difference in terms of closing the wage gap in Hollywood, it's Jennifer Lawrence. Lawrence landed the top spot in 2016's Forbes list of highest paid actresses, making her a two-time IN A ROW holder of the highest paid actress title. This could be a step forward that could lead to other actresses being able to soon follow in her wake — even if true gender equality is long overdue and even longer in coming.

For 2016, Lawrence received approximately $46 million in total upon compiling her earnings from The Hunger Games: Mockingjay — Part 2, Joy, X-Men: Apocalypse, and an advance payment for Passengers. That makes her two years in a row mark a huge accomplishment, despite it being less than the $52 million she made in 2015. Lawrence has been fighting for her spot among the top names in Hollywood — no matter what their gender may be. More substantially, after the Sony hack revealed that Lawrence made less than her male-counterparts in David O. Russell's American Hustle, the actress famously spoke up for women in the industry by writing a letter on the topic titled, "Why Do I Make Less Than My Male Co-Stars?" After that, rather than being blacklisted in Hollywood for speaking out, she ended up scoring a higher salary for Passengers than Chris Pratt. Talk about a sharp turnaround.

Moving forward, we're bound to see Lawrence refuse to make a film without the pay she deserves. (Or, at least, without a pay rate that's ever lower than the male leads of the same status in her films.) Her consistency and steadfast adherence to her belief in equality can hopefully open the doors to more women being given with the paychecks they deserve, the paychecks that male stars get so easily. To be fair, as even as a woman, Lawrence enjoys a lot of privilege, being young and white in an industry that is even more oppressive against older actresses and actresses of color. But if she can speak out and have her paychecks not suffer for it, then she could pave the way for others to follow in overcoming their own issues in the industry.

However, in order to fully access the forward motions of Hollywood, a comparison to 2016's highest paid actor would have to be done. This year's highest paid actor has yet to be announced, and I'm already hoping that her $46 million stands a chance when it's up against whoever is named. But I'm not very hopeful that the gender wage gap could have been closed so easily and quickly. Especially since, when up against Robert Downey Jr. — 2015's highest paid actor — he had $80 million compared to Lawrence's $52 million. That gets even worse when you consider that Downey Jr.'s income consisted mainly of his one movie for the year, Avengers: Age Of Ultron, compared to Lawrence's three (Mockingjay — Part 1, Serena, and X-Men: Days Of Future Past).

As bleak as it may seem, topping the Forbes list for the second year in a row could show a growing trust in Lawrence's work. And, with actresses such as Daisy Ridley, Gal Gadot, Alicia Vikander, and many, many more set to continue dominating the box office come 2017, we may one day see a year when there isn't such a huge disparity between the highest-paid lists by gender.

More like this
Everything To Know About 'The Hunger Games' Prequel Movie
By Grace Wehniainen and Radhika Menon
Jennifer Coolidge Got A Lot Of “Action” Thanks To 'American Pie'
By Catharina Cheung
Jennifer Coolidge Needs 'Legally Blonde 3' To Happen So She Stops Getting Hot Dog Jokes
By Jake Viswanath
What Is Ben Affleck's Net Worth? At 50, The Oscar Winner Makes 8 Figures Per Film
By Meg Walters
Get Even More From Bustle — Sign Up For The Newsletter