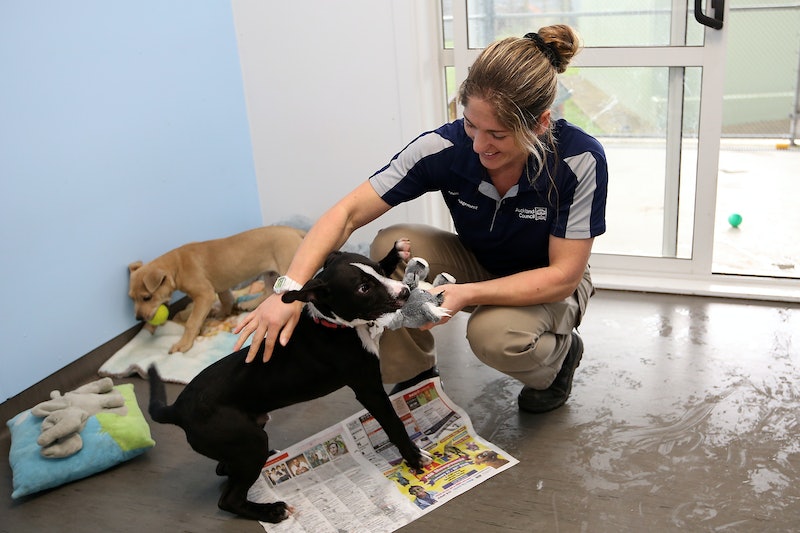 We operate in a world where we assume that dogs want food more than they want our love. In fact, if you have taken a puppy training course, one of the main things they teach you is to reinforce good behavior with treats and snacks. But what if I told you that a study revealed dogs would rather be praised than get a treat? Would that shatter your entire idea of the human-dog relationship?

Neuroscientist Gregory Berns conducted a long-term study over at Emory University, comparing the brains of dogs who received treats verses dogs who received verbal praise. The study consisted of 15 dogs who were able to sit inside of an MRI machine for 10 minute intervals. This meant that hyperactive dogs were less preferred than family dogs such as golden retrievers. The canines were shown different objects. After each round they were also rewarded with a treat, then a verbal treat in round two, and finally nothing during round three. (This is why I could never be a scientist. I wouldn't be able to keep myself from holding those dogs in my arms.)

Before looking at the results of the study, we would assume that the dog's brain would react stronger towards the food reinforcement over a verbal one. As a dog owner I can back up the theory. Have you ever seen a dog around a dinner table? No amount of verbal praise is going to stop them from wanting to taste your baked chicken. Well, according to the study, we are dead wrong. Dogs were shown to be just as into verbal praise as they were into food.

The MRI scans showed that 13 out of the 15 dogs in the study wanted verbal praise just as bad as a snack.

Ultimately, this study revealed things that can further help dog trainers build relationships with their animals. It also showed that some dogs are better suited for companionship jobs. The dogs that were too hyper for the experiment might work best as search and rescue dogs, while others should work closer with humans. Either way you should be very sweet to your dogs, and make sure to provide them with plenty of food and verbal reinforcements.

Here are some other ways to make your pup happy:

Dogs love it when you pet them at the base of their tails and on the back of their necks where the collar is. Want to be a dog whisperer? This is basically foolproof.

The reason why dogs want you to rub their bellies are not all selfish. Sure, it feels great for them, but they are also showing you that they trust you. It's a submissive pose and they want to show you they are not afraid. So put down those snacks and start rubbing some bellies!

I know this is a hard one to follow, but it turns out that dogs don't actually like being hugged all that much. A study revealed that less than 10 percent of dogs tested responded positively to being hugged. Maybe stick to scratches.

Dogs ears are one of the three main nerve centers on a dog's body. That means rubbing their ears relaxes them and feel great. Just make sure your dog is into that before getting all up in it.

Dogs communicate through touch. By touching their nose with yours you are saying hello. Dogs do this with each other as a way to find out if there was food nearby.

More like this
The 4 Best Food Bowls For Dogs With No Teeth, According To Experts
By Maria Cassano
The 8 Best Collars For Cats Who Hate Collars, According To A Vet
By Lauren Moison
Dog Trainers Swear By These 15 Little-Known Tips For Making Your Pooch Behave Better
By Allison Bolt
This Wi-Fi-Enabled Pet Feeder & Camera Gave Me Peace Of Mind On An Overnight Trip
By Danielle Calma
Get Even More From Bustle — Sign Up For The Newsletter