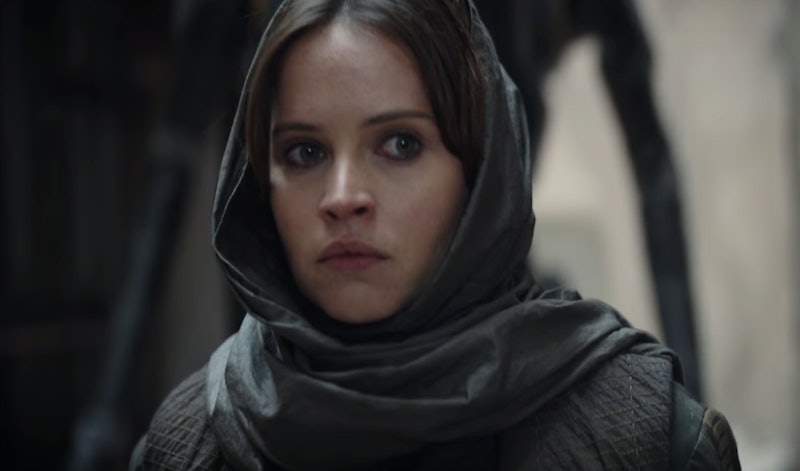 For the first time in Lucasfilm's nearly 40-year history, fans of the galaxy far, far away are going to journey into a story separate from that of Anakin, Luke and Leia, or even the powers of the Force. With the very first on-screen Star Wars spin-off, Rogue One: A Star Wars Story, the unknown Jyn Erso is giving fans a direct look into the rebellion during Darth Vader's reign. And, while Stormtroopers may be afoot, this new venture is taking us to different parts of the galaxy. Until, of course, Star Wars: Episode VIII hits theaters in December 2017. But, with entirely new characters in our sights, that doesn't mean that Lucasfilm is just doing whatever they want. In fact, according to Rogue One director Gareth Edwards, there's multiple meanings behind the new Rogue One title. And, aside from summing up it's own story, it's also emphasizing Lucasfilm's venture out from the original saga. Yep, Lucasfilm isn't going to ignore the fan skepticism either.

As Edwards said in an interview with Empire magazine:

"I'd been thinking about it. What does it mean? 'Rogue One' is a military call sign to some extent, but this is the first film that's gone off-piste and is not part of the saga — or the Anakin story — so it's the 'rogue' one, you know?... It's kind of describing her as well in a similar way. It has [all] these split, multiple meanings that made it feel like the right choice."

But now, of course, this opens the doors to a ton of questions about what all of those "multiple meanings" may be. Aside from this film being the "rogue one" of the bunch, the possibilities are nearly endless. Especially when taking into consideration the bits of information we know (and don't know) about Jyn Erso and her companions thus far.

As far as what we do know, it's that Jyn Erso is a rebel in every sense of the word. With her dark past and impromptu task of joining the rebellion to steal Darth Vader's plans for the Death Star, she can easily hold the title "rogue one" as her own. However, this also opens up questions in regards to whether or not it will relate to Anakin's family and the saga's core storyline at some point. Especially considering the fact that we know that these efforts helped Luke Skywalker, Han Solo, and Princess Leia ultimately defeat the Dark Side. And paired with the possibly that Jyn Erso could, in fact, be Rey's mom, "rogue" may not necessarily mean separate. In fact, she could be a carrier of the Force all on her own. Making me wonder: Is this movie all that "rogue" after all? Or is it just the missing puzzle piece in the saga that we've had yet to see? It all depends on how you look at the title. And now, even Edwards isn't too shy to say there is some level of meaning to it all.

But, no matter what the meaning may be, the Force is sure to be with us. Rogue One: A Star Wars Story hits theaters December 16, 2016.