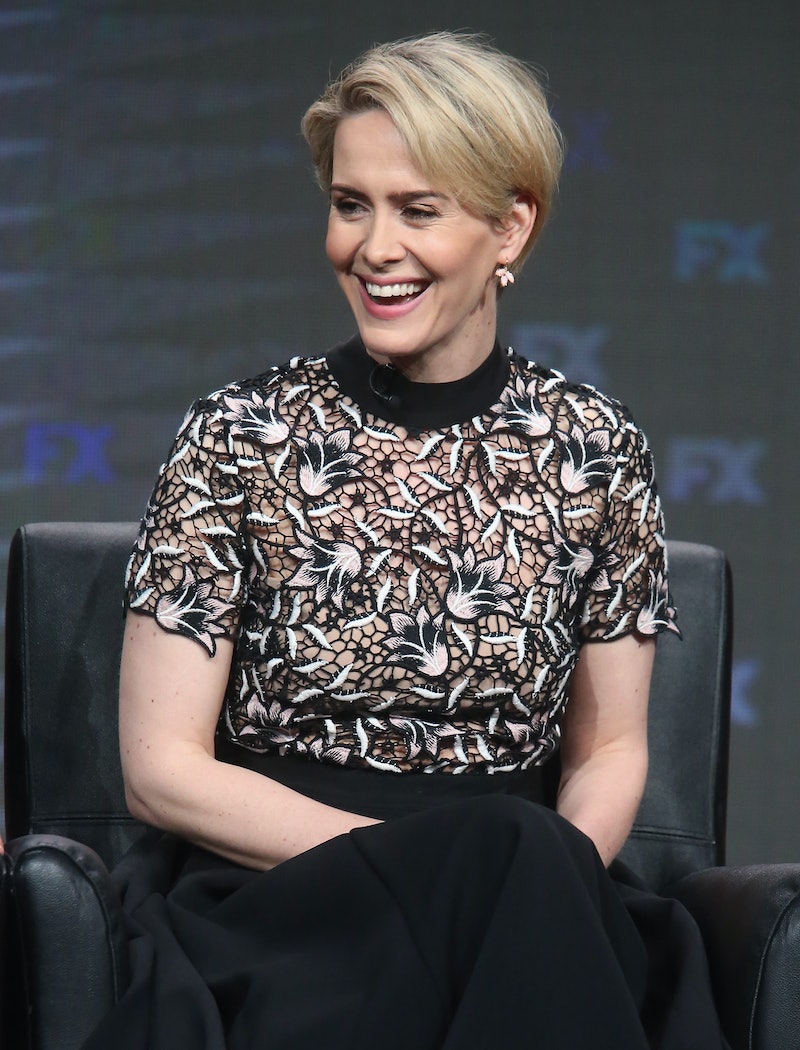 Ryan Murphy's upcoming anthology series Feud just got a whole lot scarier. The TV legend walking among us took to Twitter Tuesday afternoon to not only show off his incredible new avatar, but to also announce that American Horror Story star Sarah Paulson is joining the show as Oscar-winning actress Geraldine Page. This not only means Paulson (who better win an Emmy for her stunning portrayal of Marcia Clark on American Crime Story , Murphy's other other show), will once again create on-screen brilliance with Murphy, but will reunite with none other than her American Horror Story sister from another mister, Jessica Lange. I'm squealing.

I know it's weird to say that there's a mini-reunion happening for a show that's still on the air, but since Lange left AHS, this is a huge deal. While I still have dreams of Lange returning to AHS and reclaiming her throne (even though she's said her time on the horror anthology series has definitely ended), I can't think of a better series or setting for these two to reunite. The first installment of the series will focus on the battle of epic (petty) proportions between What Ever Happened To Baby Jane? stars Joan Crawford (Lange) and Bette Davis (Susan Sarandon) in the '60s. We know these two can bring the bitchy and I can't wait one more day to see what Paulson will add to the fiery combo.

Even with as little as we know about the show, this news makes it worth the wait until the dreaded 2017 when it'll likely premiere. I mean, seriously. Look at them...

They Were A Magical Pair From The Start In American Horror Story: Murder House

They only shared a few scenes together, but trust me when I say those scenes were magical AF.

Don't Even Get Me Started About Their Crazy, Power-Struggle Dynamic In American Horror Story: Asylum

It was also a disgusting dynamic because Lana (Paulson) was constantly abused due to her sexuality, but Lange and Paulson's scenes together were still extremely compelling.

They Played Mother And Daughter In American Horror Story: Coven

And it was actually pretty perfect.

They Were Also, You Guessed It, Brilliant In American Horror Story: Freak Show

Though their characters weren't really the most well-adjusted.

Though this may be a mini American Horror Story reunion, I think you can tell it's definitely going to be the best ever.

More like this
“The Door Is Always Open” For Another 'Breaking Bad' Spin-Off, Says AMC Boss
By El Hunt
Emma Thompson, Lashana Lynch, & Stephen Graham Lead Netflix’s 'Matilda'
By Sophie McEvoy
'The Undeclared War' Spotlights The Real-Life Threat Of Cyber Attacks
By Maxine Harrison
Romesh Ranganathan’s Avoidance Is Based On His Own “Maledom”
By Maxine Harrison
Get Even More From Bustle — Sign Up For The Newsletter