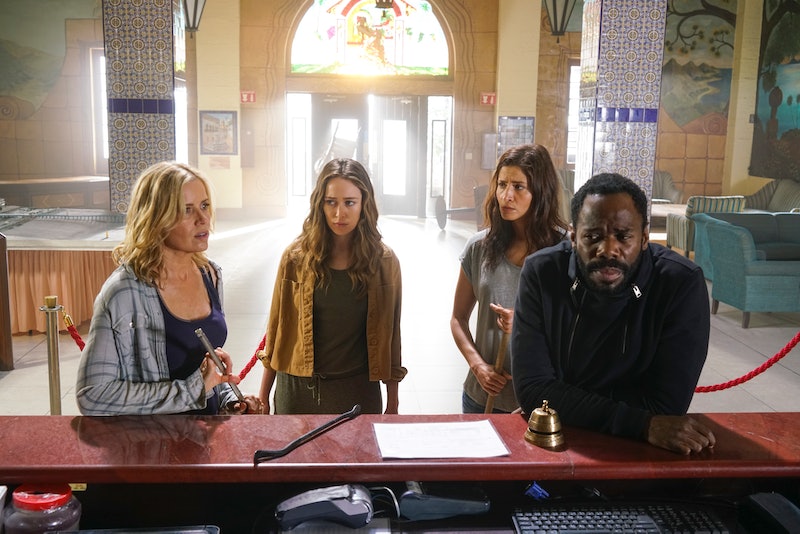 In the episode, Alicia and Ofelia worked together to search a hotel that they planned to use as shelter along with Strand and Madison. The two ladies went room by room and minibar by minibar, discovering more than a few infected along the way. However, after Alicia took a break to shower, Ofelia was nowhere to be found.

Then, all of a sudden, the infected started jumping off of the hotel's many balconies. This seemed to imply that Ofelia might have done the same, if the dead hadn't gotten to her first, but there's no proof yet. When she and Alicia encountered a man who had hung himself in the shower, Ofelia seemed particularly shaken. Is Daniel's demise affecting her mental state? Ofelia's father took his own life, and she's barely had time to process that loss. She talked a little about how difficult it was to go on in this new world.

Earlier we learned that Ofelia was once engaged, but had to break it off when her fiancé's work took him out of state and she had to stay with her parents. Personally, I don't think she's dead yet. We haven't seen a body, and there's definitely more to her story to uncover.

Also, who took the Abigail? The reason that the group ended up in this hotel is that their ride went missing. Strand thinks that the government, or more likely the military, took his yacht — but I'm not so sure. Alex, Jack, and their band of pirates may have been following them for a while. Strand and Madison then shared one of my favorite scenes in the entire series, getting drunk together and banging out a postmodern jam session on the hotel lobby's piano. The episode ended in a cliffhanger with regards to Ofelia's fate and the infected attacking the hotel, but it was one of Fear The Walking Dead's best yet.