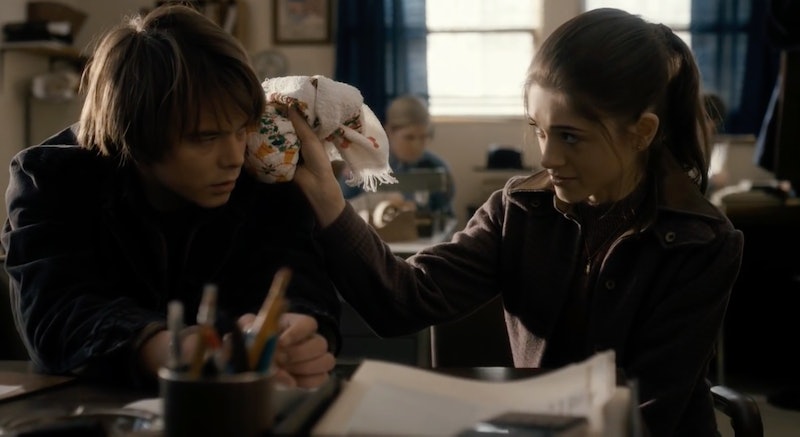 The highlight of summer 2016 has to be Stranger Things , aka, the only Netflix show you should be marathoning right now. Why? It's not only an excellently conceived piece of television, it's got a killer soundtrack, a dynamite cast and pays homage to the most iconic sci-fi franchises of the '80s. But the one aspect — or rather, character — of the Stranger Things world that needs a bit more appreciation is none other than Nancy. Nancy Wheeler tends to get overlooked in the grand scheme of Stranger Things. While it's easy to focus in on the meta-casting of Winona Ryder or pinpoint all the ways in which the younger kid squad totally steal the spotlight, Nancy's role in Stranger Things should not be forgotten as not only one of the most feminist, but one that simultaneously subverts and embraces the myriad of '80s film roles her character pays homage to. Let me explain.

After Stranger Things was released, The Duffer Brothers explained that each of the three "teams" searching for Will Byers had storylines loosely constructed in homage to different '80s films or directors. In the case of Nancy and Will's brother, Jonathan, their storyline echoes the films and themes of Wes Craven and John Carpenter's work. Thus, the world of the Stranger Things teens revolves around sex, horror, action and battling a monster the embodies all their own internalized fears about the world. As such, it's easy to pinpoint Nancy as "The Final Girl" in this horror-inspired storyline; it's her function as a Final Girl that is the reason we should be talking about and appreciating her more.

The Final Girl trope is well-established in horror: It denotes the one young woman who is destined to defeat the horror that is terrorizing her, largely due to her intelligence and physical capacity that is established throughout the course of the film. In horror flicks like Nightmare on Elm Street and Halloween, the female protagonists are not damsels in distress; instead, they are pure badasses, established by the aforementioned qualities and crucially, her rejection of base teenage (the '80s loved a good teen heroine) pleasures like drinking, drugs, and sex.

Nancy is a modern Final Girl, framed by '80s cinematic notions of teenage womanhood. She gets to be one without exploring her own sexuality and moral code as she helps Jonathan search for Will. It's crucial that she is established as a goal-oriented, academically-minded young woman at the beginning of the show. Her boyfriend, Steve, would rather get to third base, drink his parents' booze, and exist as one of the popular kids. Conversely, Nancy isn't satisfied to simply be another typical high school girl by sacrificing her own identity just so she can be Steve's voiceless arm candy.

As Stranger Things progresses, Nancy's personal arc mirrors Scream's Sidney Prescott. Like Sidney, not only does Nancy get to have sex, drink, and stay out past her curfew and live to tell the tale, she makes it to the end of the show a stronger person. It's not solely down to those actions, of course: They just simply showcase that Nancy is a young woman negotiating her identity and maturing because of it. These actions, along with her established intelligence and fortitude, serve her later in her search for Will.

Nancy chooses to go through the portal in the woods in an attempt to find Barb. She becomes fearless when facing the Demagorgon in the Upside Down. She is able to team up with Jonathan without become a fawning or helpless love interest (if anything, that's Jonathan's job). It's Nancy who is able to fight alongside Jonathan and remain friends with him. She rejects being a typical suburban girl when it matters and that needs to be recognized and appreciated.

Even better, Nancy gets to live as a woman in charge of her destiny while still living as a flawed, independent, kind of clumsy teen. She can be a bit rebellious, she was not a real BFF to Barb when it mattered (but Nancy went out searching for her ASAP, so...), and she has a tendency to go quiet when she should be standing up for herself, like when Steve was insulting her behind the Hawkins movie theater. But you know what? It's alright to be a flawed heroine because you're human, and still a heroine in the end. When it matters, Nancy comes through and it able to take care of herself and her friends. That's why we need to celebrate Nancy and why I'll keep hoping we see more of her in Season 2 of Stranger Things.