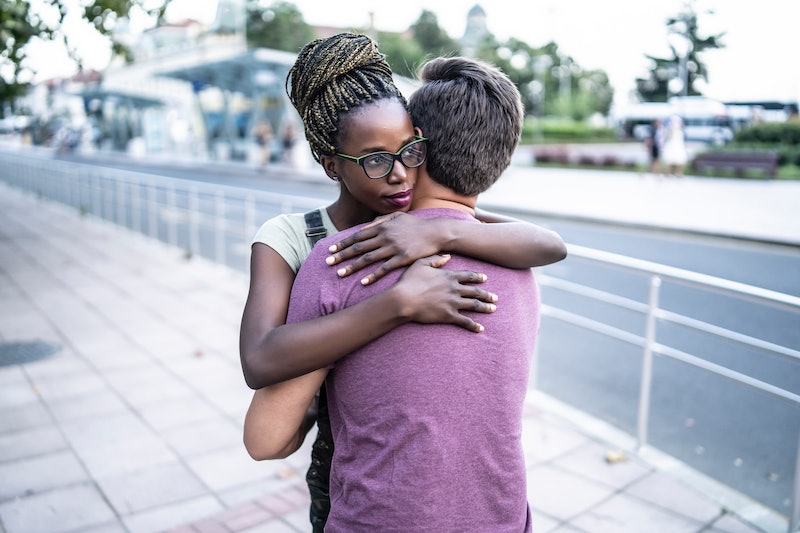 Everyone responds to grief differently, but one thing that's pretty standard across the board is that there are always ups and downs to the grieving process. One second, you think you've got it under control, and the next you're harboring pain so overwhelming that you can't pull yourself off the couch. When it's a close friend who has lost a loved one, it can be especially difficult to watch them go through all the phases of mourning. You wish you could take their pain away. You wish you could do anything at all to make them feel more at ease. But you know it's not your fight, and all you can do is be there for them when they need you most.

Even more difficult than accompanying your friend through this stage of life is trying to do so when you live in different places. You don't have the luxury of popping over to their house when you're done with work and cooking them dinner while they talk things out. Luckily, technology has given us an abundance of ways to video chat and text no matter where you are in the world, but relating to each other through that medium can feel artificial and slightly contrived when someone's grieving. It's still important to make long-distance communication a priority, though, because it's the smallest gestures that could make all the difference in the world to someone who is heartbroken over a loss.

1. Send Them Gifts To Let Them Know You're Thinking About Them

You can't ever go wrong with sending flowers. Have a bouquet sent to their work and to their home. Write a nice note on it to remind them that they're on your mind, and that you care about them. If you've been friends for a while, you likely know which things bring them the most comfort. Send as many of their favorite goodies as you possibly can. It may sound silly to ship them a stuffed panda bear holding a packet of Skittles, but the potential smile that may come out of it makes it totally worthwhile.

2. Stay In Touch With Their Close Friends And Family Members To See How They're Doing

Most people who are grieving have trouble telling you exactly how they feel and what they're going through. The heartache becomes so consuming that they lose the ability to communicate clearly and, in some cases, reach out for help. Megan Devine, a clinical grief counselor and writer, wrote for Huffington Post about how to help a friend who's in mourning, and she says it's normal for people to not ask for help when they need it. It's not that they don't want help, but boldly asking for assistance is "light years beyond their energy levels, capacity or interest."

Because you won't always know how they're truly doing based on what they tell you, stay in contact with the people who see them every day. They can tell whether they've been sleeping and eating regularly, and they can let you know if your friend is need of something more than just a phone call. This will also save you from pestering your bestie and asking them over and over again how they're really doing.

3. Talk About The Loss Openly With Them

"The griever needs and wants to talk about 'what happened' and their relationship to the person involved," Russell Friedman, executive director of The Grief Recovery Institute in California co-author of The Grief Recovery Handbook, tells AOL Health. It may be initially uncomfortable to bring up the person they've just lost, but talking about it frankly is all part of the process. Throughout your friendship you've probably been through plenty of sticky situations, and this is just another moment when you have to be brave and bring up the things that aren't exactly easy to talk about.

They've heard enough of "It was their time to go" and "God needed another angel" (or however that phrase goes). They don't need to hear that stuff from you, especially after the funeral where pretty much everyone kept saying that their loved one "went to a better place." Devine says, "These future-based, omniscient, generalized platitudes aren’t helpful. Stick with the truth."

Acknowledge what your friend is going through and tell them that you see how hard this is for them, and that, yeah, it really sucks to say goodbye to someone they cherish. If you steer clear of tropes and commit to being honest with them, you'll give them the support they need, which is probably the kind of support they've been lacking from others.

5. Encourage Mutual Friends Who Are Closer By To Help

It's perfectly natural for your mutual friends to freeze when death comes into the picture. They may not know how to be helpful, so you'll have to step up and tell them how to be there for your friend when you can't physically be there yourself. You don't have to boss anyone around, but it's not a bad idea to gently assign them things to do.

For example, ask a mutual friend who lives nearby if they'd be willing to cook dinner for them one night so they have a warm meal. Ask another person to stop by and do the basic clean up around the house so they don't have to worry about exerting themselves. Organizing these small tasks to get done will help you feel like you're involved, and it will definitely make your friend feel cared for in a big way.

Your friend has just lost an important person in their life who was a significant source of love and affection. Nobody or nothing will ever be able to replace that, but you can certainly reassure them that there are a lot of other people around who still love them dearly. Send them warmhearted texts and pictures that remind them of all the good they have in their lives. Listen to what they have to say, free of judgment, and tell them afterwards that you love them no matter what.

You'll never be able to fix anything or cure their sadness, but displaying how much you care will help them realize that they're not alone, and that there is life after losing someone you love. It might be easier if you were nearby — but you can still tell them you love them, and make sure they know you're there, even if from a distance.